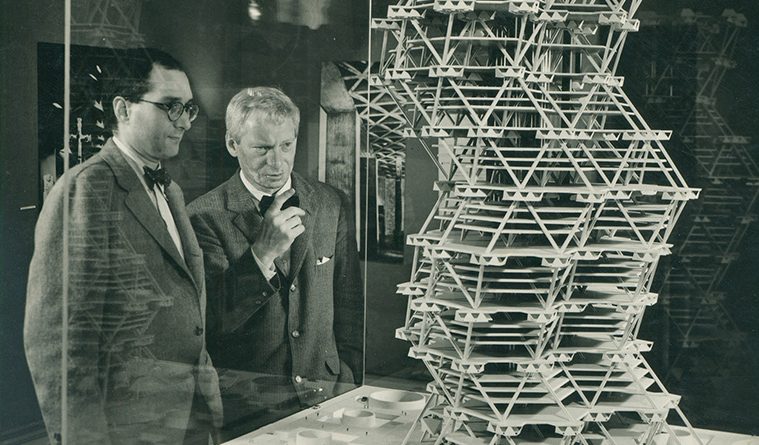 Louis Kahn: The Power of Architecture

Louis Kahn in front of a model of the City Tower Project in an exhibition at Cornell University, Ithaca, New York, February 1958.
© Sue Ann K. 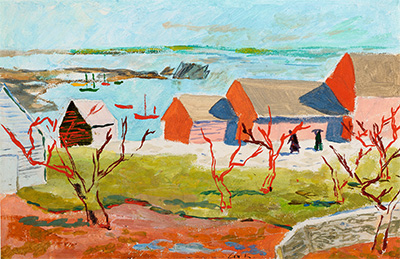 Despite an output that was relatively small, Louis Kahn is one of the most important architects of the 20th century. Louis Kahn: The Power of Architecture, the first major retrospective of his work in two decades, is on view through June 25 at the Kimbell Art Museum in Fort Worth, a building he designed which is recognized as one of the most significant works of modern and contemporary architecture. The exhibition provides visitors with the opportunity to realize what is at stake in the creative process of an architect.

At the turn of the century, a time when the International Style was at its peak with its penchant for open, flexible spaces and prefabricated structures, Kahn synthesized the ideals of simplicity promoted by architects Mies Van Der Rohe and Adolf Loos. Through his own distinct style, he rejected the idealistic approach that viewed form as an absolute and human use as secondary consideration. Instead his works, in the words of architect Sou Fujimoto, were and are “monuments for people.”

The Kimbell’s exhibit opens with the obligatory timeline, summarizing Kahn’s entire life and career across three walls. Photos of his parents, ephemera from his travels, correspondence and more are juxtaposed alongside a chronology of the projects he realized throughout the world. It’s the only concession the show makes to personalization; the remaining rooms are filled almost exclusively with chipboard and wood models, sketches, photographs, notes, drawings, and books and articles related to his work. 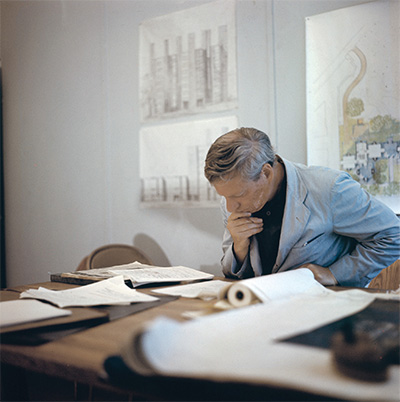 Louis Kahn at his office, c. 1960
© Architectural Archives of the University of Pennsylvania, Philadelphia.

Like many architects working at mid-century, he began his career working in the public sphere: Performing traffic studies, building housing blocks, and working with city government before graduating to big commission projects. The early sections of the exhibition devoted to science and the city also note the work of Josef Albers (who taught alongside Kahn at Yale in the 1940s) and whose fascination with the interplay between surface and space would heavily influence Kahn’s designs. His practice evolved alongside his travels, many drawings and writings from which are included throughout the exhibition. A focus exhibition situated at the conclusion of the main work is composed of a series of lovely, light-filled pastel drawings Kahn made as he traveled through Italy, Greece, and Egypt.

The exhibition is organized by six themes that characterize Kahn’s architectural philosophy, tracking his career project-by-project, beginning with the city. Kahn’s thinking about the 20th century urban core, and his life in Philadelphia just as the city was becoming a model for the reconsideration of downtown in the aftermath of the car, undoubtedly prompted his lifelong consideration of how people use spaces. He spent several years working on an unrealized redevelopment plan for what would eventually become Penn Center on behalf of Philadelphia’s visionary postwar city planning commissioner Edmund Bacon. 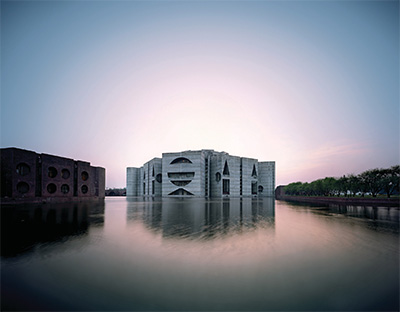 A contemporary of Buckminster Fuller and a great admirer of architect Anne Tyng, Kahn was also greatly influenced by science, specifically in the revolutions in building he would make in collaboration with engineers. A massive model at the entrance to the exhibition illustrates his unrealized City Tower, a biomorphic skyscraper designed for Philadelphia in collaboration with Tyng. Also included are drawings, photographs and texts by Fuller whose concept of space-frames would influence one of Kahn’s early commissions, the Yale University Art Gallery, which features a unique triangular motif reminiscent of DNA on its concrete ceiling.

Despite his use of typical Brutalist materials such as concrete, Kahn’s buildings never sacrifice light and air—they are imposing but not uninviting. His work with landscape and homes showcase the importance of incorporating his buildings into their natural surroundings, and his notion that the interior of a space only becomes such with the entrance of natural light. “It is not so much what you see but what you feel,” Kahn is quoted as saying in the exhibition. 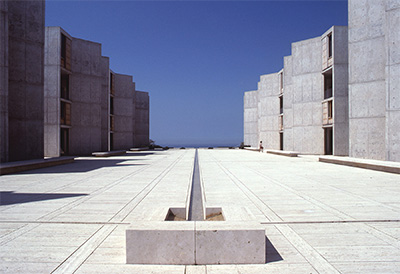 Architecture didn’t begin concerning itself with people until the 1900s, but even then, function was secondary. His buildings may have occasionally created community by force. For example, his collaboration with the commissioners of the First Unitarian Church in Rochester provides an interesting example of Kahn tempering his own privileging of form in the service of what he believed the church would have desired. But the Unitarian Church, like the Salk Institute’s massive plaza, or the National Assembly building in Bangladesh and the Phillips Exeter Library, illustrates Kahn’s ability to focus on a building’s core function—a library of books, an assembly hall, or a sanctuary—without sacrificing human encounter.

The concept of the “eternal present,” a term coined by S. Giedion for his book on the beginnings of architecture, is used by the curators to encapsulate the permanence of Kahn’s most important works, the imposing Sher E. Bangla Nagar complex in Bangladesh, the Indian Institute of Management in Ahmedabad, La Jolla’s Salk Institute, and of course, Kahn’s masterpiece, the Kimbell. Kahn referred to these as “ruins in reverse,” the buildings you imagine the citizens of Earth will encounter 1000 years from now, just as we encounter the ruins at Angkor Wat, Rome, and Athens today. Kahn returned mass and weight to the lightweight nature of what still qualifies as contemporary style in an attempt to build not just for today but for the future.