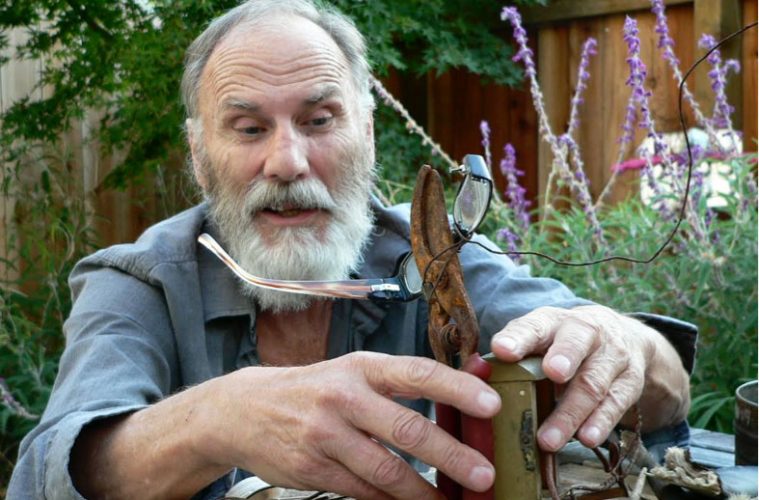 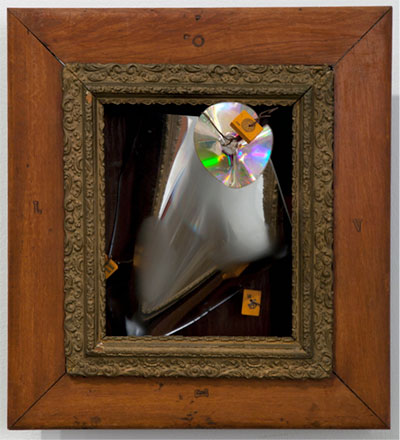 “Did Constructivism manifest itself beyond painting and sculpture?” This question, typed out and resembling the contents of a fortune cookie, is taped to an L-shaped bracket on a work by George Herms. The quote is part of his wall sculpture, The Painter’s Mind, and is currently on view at testsite as part of LOVE George Herms, a solo exhibition that spans over 40 years of art-making

Named after a book written by painters Romare Bearden and Carl Holty, the 1981 sculpture is an example of much of Herms’s found sculptural assemblages, five of which are included in the show. Consisting of an old piece of wood as the canvas or backdrop, he attached the 2 L-shaped brackets, a worn piece of paper with an orange bottle cap nestled on top, and the top of page 80 torn from the book. On the page, one can make out a few sentences, which clearly speak to the source of inspiration for the work of art. But referring back to the original quote, it is unclear if it also comes from the book or somewhere else. Herms’s works do have somewhat of a loose constructivist thread and both his newer collages and older sculptural assemblages in testsite’s exhibition tread that architectural line while adding a humorous dimension.

Herms, a Los Angeles-based artist, is known as one of the founders of California assemblage and has been associated with artists from the early period of Ferus Gallery in Los Angeles, such as Ed Keinholz, Dennis Hopper, and the influential Southern California assemblage group Semina. This exhibition mixes a variety of Herms’s works on paper with his sculptural pieces. Sarah Bancroft, the curator of testsite’s show, previously worked with Herms on her exhibition Two Schools of Cool at the Orange County Museum of Art in 2011.

Heavily influenced by the Beat Generation poetry as well as jazz, Herms’s practice has greatly influenced a younger generation of artists, especially in Los Angeles, and he has been affectionately dubbed the spiritual godfather of the found object art practice. Over his career, Herms has continually challenged himself to use anything that comes through his studio to create work; visually mixing materials and objects as a poet mixes words to create new meanings and associations.

Standout works in the exhibition are his newer collages. With imagery culled from fashion and high society magazines, Herms collages small vignettes that heighten the seductiveness of glossy fashion advertisements, somehow managing to assemble content into organic forms that resemble birds in flight or origami before the folds are finished. These works, mostly from 2011 and 2012, are a contrast to his other collages, which are made up mostly of time worn pieces of mail, folders, and receipts. The visual poetry that Herms refers to in these new pieces is very apparent in the colorful, glossy collages. The forms are alluring and exciting, in contrast with the collages created from Herms’ vast archive of materials, which feel more like Herms unearthed a pile of old mail and glued the materials down just as he found them. Perhaps this is his strategy, but unfortunately, as visual objects, they are quickly passed over.

Finally, laid out on the dining table of the home is Haiku, written by Diane DiPrima and illustrated by Herms. The poems go through the four seasons and are monoprinted with an illustration related to each line of the three stanza poem, 36 loose leaves in total. The illustrations are at times both sorrowful and humorous, and the work feels dated. Each leaf is laid out on the table and they wrap around, coiling like a snake.

Before leaving the gallery, I noticed a black portfolio in the foyer. Inside were a few more colorful, brilliant collages that were not hung, a clear oversight. The show currently on display at testsite would have greatly benefitted from these collages on display instead of Haiku, which while showing another side of Herms did not quite fit in with the rest of the exhibition.