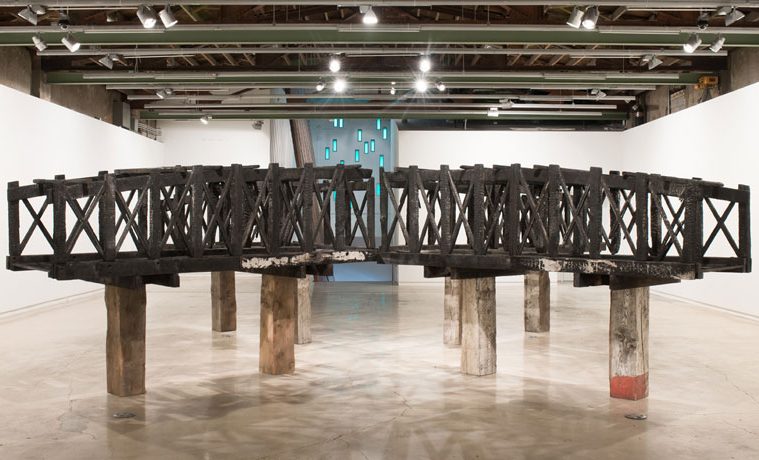 It’s no accident that The Contemporary Austin decided to commission two works from Marianne Vitale, site a New York artist known for provocative sculptures constructed from wood and steel reclaimed from old barns, capsule factories, and railroads. Her work, which celebrates artistic process and transformations, provides the perfect metaphor for the metamorphosis that brought the Contemporary itself into existence from the old AMOA-Arthouse just a few months ago.

Vitale created two sculptures for the museum, which consists of two facilities on two very different sites. The first is the Jones Center, a modern glass and concrete structure in the busy downtown district; the second is Laguna Gloria, a gracious, early 20th-century estate on the shores of Lake Austin.

The first of these, Burned Bridge Junction (Congress) is located in the Sue Graze Gallery on the second floor of the Jones Center. Made entirely out of found lumber, this piece takes the form of two intersecting bridges created out of four virtually identical segments that never actually touch.

Much of the impact of this installation derives from the way the piece totally dominates its environment. The structure, which Vitale built and then charred through controlled burning, recalls covered bridge forms from centuries past, and looms like a decayed hunk of vanishing Americana. This sculptural symbol not only recalls the city intersection where the Contemporary is located, but also suggests its desire to break with the past and recreate itself into something equally impressive.

Where that newness is most visible is in museum director Louis Grachos’s ambitious efforts to develop Laguna Gloria as a world-class sculpture park that will acquire pieces on both a temporary and permanent basis. And so far, it is succeeding. Last September, the Dallas-based Edward and Betty Marcus Foundation awarded the Contemporary $9 million to help develop the site according to Grachos’s vision.

Vitale’s Common Crossings, which stands in a small meadow on the grounds of the Laguna Gloria, heralds the transformations yet to come at the Contemporary. Like Burned Bridge Junction (Congress), it is also made from reclaimed material—in this case, the steel crossings used to change the direction of trains along a railroad track. Nine of these half-ton “frogs” stand together, upended and planted into the ground in rows of three to create a kind of square.

In this altered and repurposed form, the crossings appear strangely human, with discernible heads, shoulders and legs. Vitale claimed that the seven that appear to stand on two legs are “male” while the two that stand on one are “female.” The overall effect of this massive installation is to inspire a sense of awe. It is as though the viewer is in the presence of beings that have witnessed—and survived—America’s industrial and frontier past, and now stand guard over the natural world that this past tried to conquer.

The fact that the crossings were used to change train direction also ties in to the new course the Contemporary is now setting for itself. Before the coming of executive director Grachos (who began his tenure last January), neither the museum nor Austin had much cachet in the art world. But his bold new vision may turn the former into a world-class gallery and the other into a mecca for contemporary visual art.

One can hope. If Vitale’s work is about anything, it is about the power of fearless re-visualization. With creativity and a little bravado, anything is possible.