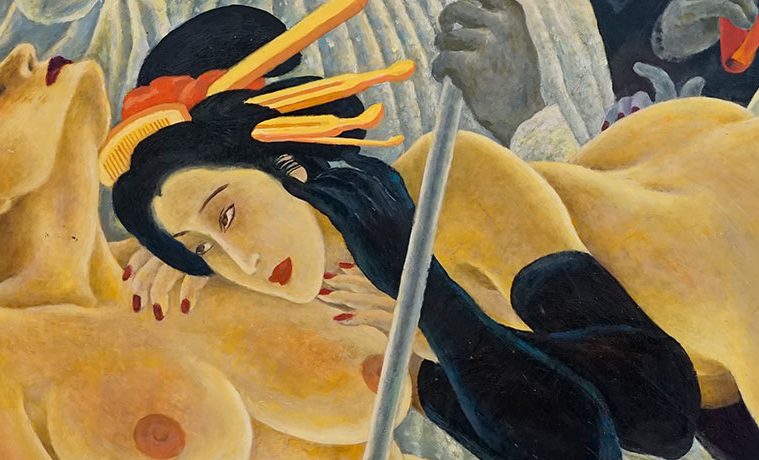 Masami Teraoka: Inversion of the Sacred 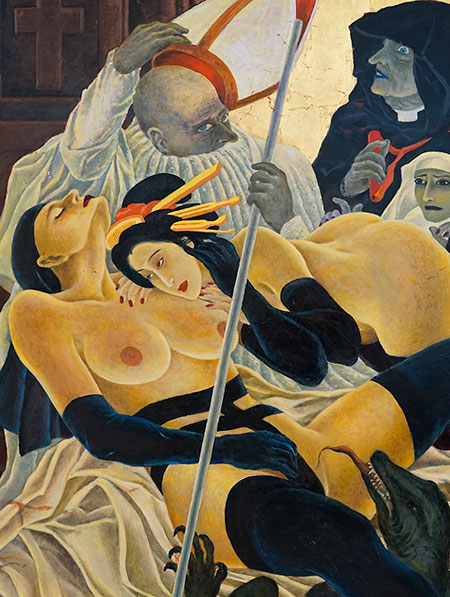 DALLAS—Masami Teraoka’s seven newest triptychs, executed in oil on panel with gold leaf frames between 2009 and 2014, transform the McKinney Avenue Contemporary’s large gallery into a modern day version of a Renaissance chapel. Except that in this case the images are anything but devotional religious icons: Rather, they implicate the church and clergy in their abuses of power by placing them in the center of lascivious sex acts and acrobatics worthy of the Marquis de Sade.

The large triptychs average 120 square inches and are arranged two to a wall, with an entire wall devoted to a single smaller piece, The Last Supper/Pope’s Mega Squid Thrust (2009-2010). This arrangement prescribes a long axis design to the gallery.

Almost from the beginning, the work included references to popular culture and mixed eroticism and folly with a critique of consumerism. Teraoka then mobilized this imagery by creating large-scale watercolors that touched on the AIDS crisis in the 1980s and 1990s. Now, his fascination with Italian Renaissance Old Master paintings and churches has led to a change to oils and the triptych icon format. The pieces at the MAC are derived from an unrealized project to adorn a deconsecrated church in Italy with nine large-scale works, now seven.

The current subject matter centers on the Catholic priest abuse scandal by including the Pope, priests, religious imagery and iconography into his world of pin-up women, bondage, sex, depravity, and fantastical demons and sea creatures. In densely interwoven acts, some bordering on deviant sexuality and generally sacrilegious, female figures —mostly depicted in flesh tones, topless or in S&M garb—mingle and imprison or compromise the ghoulish green- and blue-faced shaman, also taunted by demons and squid figures. The panels even include ropes, dumbbells, ambulant liquids, wine, decapitations, spread female legs, masks, netting, and the crucifix. There’s so much happening in these fascinating tableau that it’s impossible to see it all at once.

Teraoka, while respecting Old Master painting and architecture, turns the tables on the institutional crimes of the church by inverting the formal level of the sacred into the profane, reorganizing the content of the images. In the tradition, sinners were depicted in situations of torture, suffering for their misdeeds. Teraoka simply replaced them with the once inviolate priests who are now fair game due to recent and continuing revelations of abuse and corruption. Considering the problems Michelangelo had with Pope Julius II and the Medicis, Teraoka’s vision remains faithful to the humanism that binds them together as artists who push the boundaries of the sensible.

Masami Teraoka: Inversion of the Sacred
The McKinney Avenue Contemporary