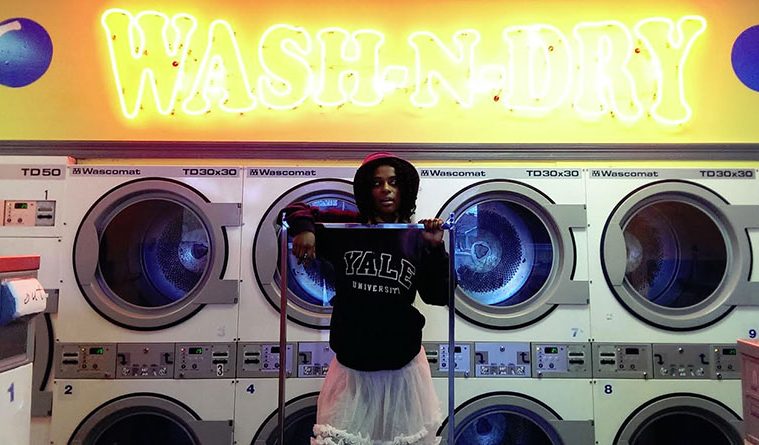 How She Got Good 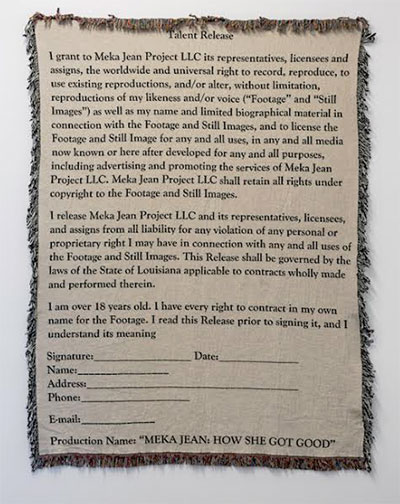 In her seminal essay “Plato’s Cave,” Susan Sontag explains the characteristics of the photograph in relation to social consciousness. Importantly, she declares “to photograph is to appropriate the thing being photographed” and to own such photographs is “to collect the world.”  By extension, the same thing can be said for video and sound recordings, which provide—through their manipulation—the opportunity to control multiple images and messages of existence, fictional or otherwise. This sense of power, however, is fleeting in an age when anything and everything is game for re-commodification, redistribution, and reclamation by others.

Struggles with ownership, validation, and identity permeate the work presented in the predominately video and audio-based solo exhibition of artist Tameka Norris at the David Shelton Gallery.   Norris, who first began her artistic endeavors in the music industry, engages with contemporary social issues surrounding the appropriation of black culture and, more specifically, of black female identity. In the video piece Recovery (2015), meant as a spoof of reality-television confessionals, Norris describes, through a progressively uncomfortable exchange, graduate school and other endeavors as a “route [she] had to take to feel more empowered, “a powerful statement that echoes similar issues addressed in a series of Alex Bagg-style videos chronicling her graduate study at Yale University. Within that series, it is the piece My Third Semester—Yale School of Art (2012) that is the most striking in its rapid transition from the humor of its predecessors to a tone so somber and unnerving viewers are taken aback by the artist’s unexpected sentimentality.

This unexpected disruption, as well as the way in which Norris carefully straddles the line between parody solely for the sake of comedy and that for the sake of thoughtful social criticism, is what makes her work so compelling. From the rap lyrics printed on the gallery walls and the actual songs themselves played on an iPod nearby, to the feature length video Meka Jean: How She Got Good (2014), which chronicles the successes and shortfalls in personal, artistic, and musical endeavors, of her alter ego, Meka Jean, Norris utilizes the seemingly disparate worlds of popular music and fine art to interrogate how one may establish a grounded sense of one’s identity within a globalized, commodity-driven society where, whether true or not, cultural history and identity is increasingly viewed as fluid and up for grabs. Her incorporation of hip hop into her practice, a cultural space in which women entertainers are constantly at risk of being misused and misunderstood by those, supposedly, there to help them, perfectly parallels the difficulties faced by Meka Jean and the troubles that plagued the production of the film itself. 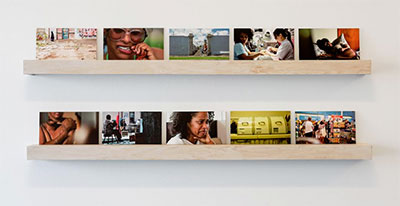 Tameka Norris, The Many Faces of Meka Jean, How She Got Good Film Portraits, 2015
10 digital prints on Dibond
5 x 9 inches each

Moreover, the dynamic of being split in two plays out in popular music as well: a woman entertainer must transform into a “performer “to be consumed by others, oftentimes in order to allow others to take and manipulate her image, yet still find ways to convince others of her humanity, to convince others that she is in control of her image (however true that maybe) and is allowed to be in control of that image, in order to garner social understanding and acceptance for her sexuality and fame.

The woven contract that doubles as a throw and hangs from the gallery ceiling is a further extension of Norris’ battle to take hold of the self. Releasing her work to Meka Jean, in particular, reiterates powerful implications that pervade all of the video and photographic pieces in which she is subject—if to take someone’s image, to record their likeness, is to own them, to appropriate them and, therefore, control them, then to take one’s own image—therefore being both subject and subjugator– functions as a symbolic act of regaining ownership of the self.