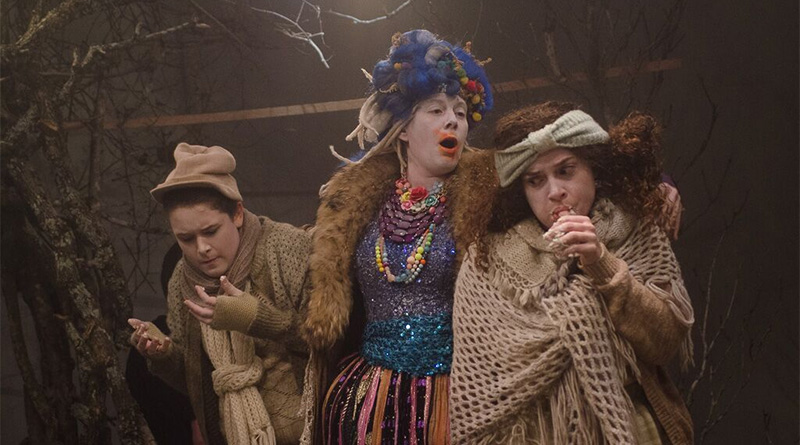 Menace in Macrame: Hansel and Gretel at the Rec Room

Emily Walton as Hansel, Julia Fox as Gretel, and Megan Berti as the Witch in the Rec Room Arts production of Hansel and Gretel, through Dec. 23 at The Rec Room.
Photos by Natasha Gorel.

“This is the future of art, where would you see something like this in Houston? Someone needs to write about this,” said Abby Koenig, looking straight at me, after a stunning and mesmerizing performance of Engelbert Humperdinck’s 1893 opera Hansel and Gretel, presented by Rec Room Arts at the Rec Room.

And she’s right, where would you see a chamber opera production of Humperdinck’s dark holiday fairy tale actually placed inside a chamber, or as the Rec Room folks describe it, a “600 sq. ft. wooded installation?”

They also describe the production as “bare bones.” Not true.

The room was tiny, but if bones are ideas and structure and treatment and attention to the tiniest detail, these bones were anything but bare. Director and Rec Room co-founder and artistic director Matt Hune scaled down to up the intensity and intimacy.

How close to you want to get to opera?

Hune decided really close. So close that I left the room partially covered in flour (I sat in the splash zone). So close that I got head bumped when Megan Berti, as the witch, bent over while wielding her butcher’s knife. So close that when a sprinkled angel food cake drops from the ceiling I could smell the sugary confection. So close that the singers’ voices penetrated my bones.

About those voices. Hune assembled a powerhouse team of talent, starting with soprano Julia Fox as Gretel and mezzo soprano Emily Walton as Hansel. Their delicious vocals combined with a physical chemistry brought a tight unity to the production. Berti was terrific as the pill-popping mom and crazed witch, while tenor Brian Yeakley added a touch of humor as the Sandman and Dew Fairy. Baritone Namdi Nwankwo was also a standout as the beer-toting father and “Angel Children” Emma McDonough and Jacqueline Touchet’s ghostly presences made for seamless transitions.

Scenic designer Stefan Azizi and installation artist Mina Gaber created the skeletal womb for Hansel and Gretel (and 30 audience members) to inhabit. Craggy tree limbs hovering in a cocoon-y dome felt both airy and cage-like. Azizi enveloped the installation in a creamy haze, echoing the chalky faces of the performers: Dreamy, with hints of an impending nightmare.

Only the witch gets a bolt of color (and a sharp knife), with a neon blue dreadlock wig that looks like some kind of post-Harvey swamp mold. It’s equal parts sinister and hilarious. Her clever choice of layered and woven materials, sometimes referencing the 1970s macrame craze, slightly softened the menacing tone of Grimm’s tale.

So on a wintery night in Houston, Hune and his cast and creative team conjured up a holiday tale in a wooded nest for us to experience one of the most famous operas about neglectful parents and starving children, framed in an ethereal cloud, where the only visible edge and reflective surface came from the sharp steel blade of the witch’s knife.

Koenig was right, this is where art needs to go: homemade, DYI, local top talent, integrated and outstanding design, and a director with a complete 360 vision. I don’t know when I have seen a production so perfectly scaled, so satisfying, charming and thoroughly thought through.

Wait a minute, I do. It was The Rite of Spring, also directed by Matt Hune, also at the Rec Room.