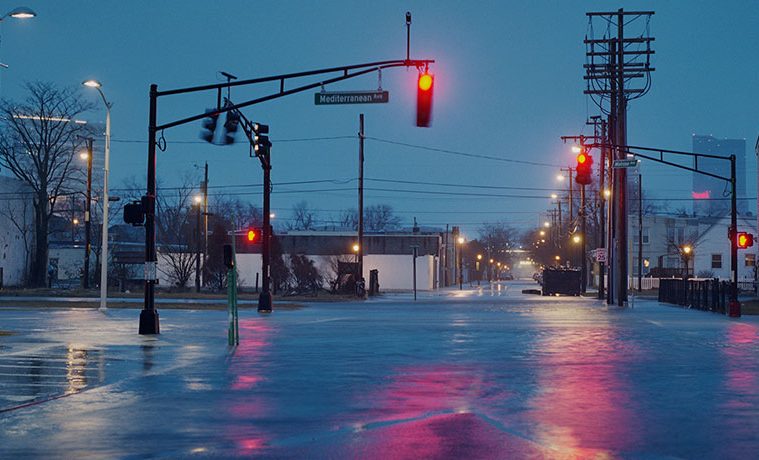 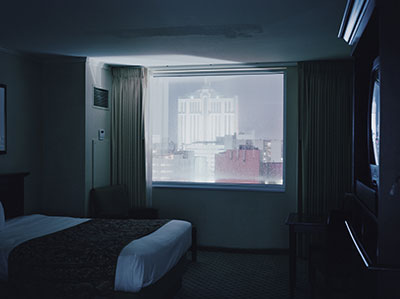 The marquee at a McDonalds near my house proclaims, “MONOPOLY IS BACK,” although I’m not sure to what extent, if any, it was ever really gone.  Growing up playing this game, and frequently losing, I found solace in its safest spaces: the four corners. Passing “Go” gave me $200, and “Free Parking” compared to winning a lottery. The double-roll required to get out of jail (which kept me safe for two turns while the proverbial cards fell amongst other players) seemed akin to the crap-shoot of a parole hearing, and the “just visiting” jail-card was not traumatic in the context of the game.  Translating Monopoly as an artistic engine and metaphor for debunked capitalism is the compelling conceptual asset of Mike Osborne’s exhibition, Monopoly, at Holly Johnson Gallery. The game’s famous board was inspired by the road network of Atlantic City, once a bustling gambling and tourism hub.  Over the decades following Monopoly’s inception, the citizens of Atlantic City have felt the effects of fickle economics in class (in)equality, employment, tourism and dislocation; such realities notwithstanding, Osborne manages to show us, through his lens, fragile optimism.

The photographs’ locations and titles are taken from Monopoly’s game board, which is where the literalness of this exercise seems to end, and Osborne’s metaphor departs. He positions the viewer’s memory of the simple (though iconic), and perhaps nostalgic, game board against scenes of actual human life.  With Osborne as the witness, the subjects and locations of the photographs provide narratives; there are pasts, futures, characters and stories, albeit imagined, pouring through these pieces.  With compelling stories empathy is drawn from the reader (or, viewer): we’ve probably experienced varying degrees of economic discomfort or hardship in periods of our lives, and suffered those trappings which accompany it. We know loneliness, poverty and disparity in as much as we know hopefulness, survival and perseverance. Interpreting these photographs individually is best left to the viewer, and the narrative he/she imagines with Osborne’s impetus.

The piece introducing the exhibition is unlike the others; it’s a diptych consisting of a Monopoly board and its reflection, each occupying its own frame, and creating a palpable dichotomy with the mirrored subjects.  The board is void of game pieces, which gives the scene a sensation of both desolation and potential.  Then, there’s the detail of the value of the dice: ten.  Although a statistical improbability, rolling consistent 10’s from the start of a game would keep you to the corners- those outskirts of “safety”; safe from reality, and safe from participating; safe from the ascensions of capitalist venture, and from the plummets of their collapse.  Osborne reveals to us that Monopoly can be analog to cycles of birth, growth, death and renewal.  For better or worse, it’s never gone.