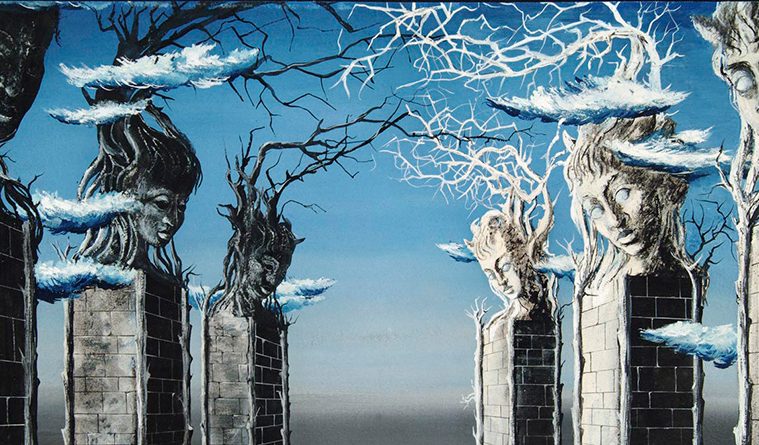 Monsters & Mayhem at the McNay

Georges Wakhévitch French, born Russia, 1907-1984
Scene design for Beauty and the Beast ca. 1954
Gouache on paper, mounted on board
Gift of Robert L. B. Tobin. 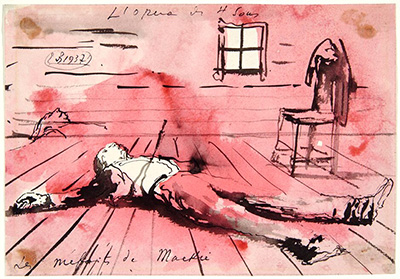 San Antonio’s McNay Art Museum has been transformed into a haunted house for the Halloween season, as if a witch had cast her spell on the venerable San Antonio institution. The scary truth is the museum’s Tobin Collection of Theatre Arts has for decades housed models and drawings of costume and set designs from productions meant to frighten the bejesus out of us—or at least propel us into fantasy worlds.

Stage Frights: Madness, Monsters, Mayhem, running Sept. 28 through Dec. 31, brings together more than 80 of these objects for the first time. “People like to walk on the dark side. It’s more interesting than sweetness and light,” explains Jody L. Blake, the collection’s curator. “On a profound level, it goes back to the beginnings of fear. They were about something appearing to you that you are supposed to be awestruck and frightened and overwhelmed by. On another level, it’s about confronting those fears and overcoming them. Why do we go on rollercoasters? We all like to be scared and survive.”

Stage Frights is divided into six themed sections: The Tyrants, Mad Slashers, Bound for Hades, Beyond the Grave, Night Terrors and Magical Realms. “We’re installing the show environmentally, with a lot of stage dressing,” Blake says. “So say when you walk into Hades, winged devil gargoyles are looking down on you from the top of the walls. And in the nature and magic section, bats hang down from the ceiling.”

A complementary exhibit, Behind the Screen: Tim Burton’s The Nightmare Before Christmas, runs concurrently. It features two of the animated film’s sets as well as the puppet of Jack Skellington, the main character used in the movie. The collection’s benefactor, Robert Tobin, bought them at a Sotheby’s auction. “There’s a reconstruction of a key scene where Jack is wandering in the woods, tired of being in charge of Halloween. It’s an immersive installation that gives you a sense of entering the film,” Blake says. “We like to channel other pop culture forms to engage people who are not theatergoers and might be put off.” 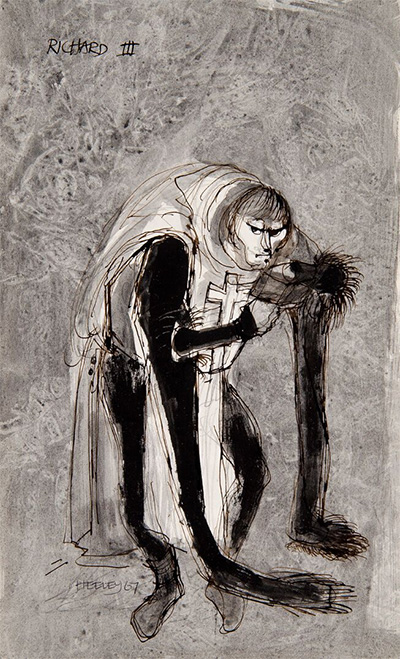 Artists have been turning supernatural ideas and images into plays, operas and ballets for centuries. The materials in Stage Frights date back as far as the mid-1700s, when a Dutch theater put on an allegorical play called Hell. The Tobin owns an elaborate handmade print created to document what the chandelier-lit stage looked like. “It’s fun to be reminded that it was a different culture then,” Blake says.

For visitors not schooled in archaic theater history, there are more familiar references. Jack the Ripper makes an appearance from a 1977 Metropolitan Opera production of Berg’s Lulu. The title character, a once-elegant woman who kills off six husbands before she is reduced to prostitution on the streets of London, is his victim. The show features costume drawings of Jack and Lulu by British designer Jocelyn Herbert, Lulu in a tattered black dress and boa. “Jack looks like a flasher,” Blake says.

There’s also a maquette, or scale model, of the scene of the crime, a garret with beams that come to a peak. Blake says the maquettes, of which there are several in the exhibit, help people understand what productions looked like, just like they helped the actors and directors picture the performance space before the sets were built. “They’re extremely extravagant models.”

Almost a dozen of the designs and models come from stagings of Shakespeare, including 1967 Richard III pieces with Houston connections. The ink-and-watercolor costume drawings of the deformed king and his reluctant wife, Lady Anne, were made by famed Houston Ballet designer and three-time Tony Award winner, Desmond Heeley, for a production at the Stratford National Theatre of Canada. His costumes of Drosselmeyer, Clara’s friend and the mice for Houston Ballet’s beloved Nutcracker, are included in Stage Frights to balance all the terror.

“Richard is completely hunched over and a little bit simian, head in front of his chest, his long arms dragging the floor,” Blake says, describing the Heeley drawings. “He looks subhuman. You just know he is wicked. Anne’s eyes are hollowed out, like her soul has been gutted or gouged out by his evil. They’re quite evocative.”

Other Richards populate the exhibit, including Morris Kestelman’s designs for a 1944 production at the Old Vic Theatre starring Laurence Olivier. But not everything comes from hit shows; the objects also include Wicked designer Susan Hilferty’s costumes drawings for Elton John’s Lestat, adapted from the bestselling Anne Rice’s vampire novels. The musical flopped on Broadway in 2006. 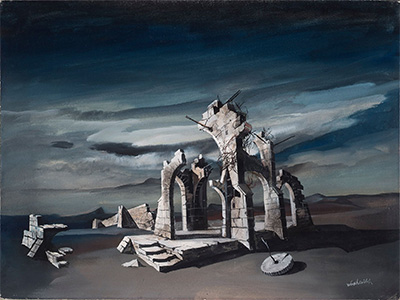 Stage Frights goes for range, from Shakespeare to Wagner, Faust to Mexican carnival imagery, Maurice Sendak representations of bats to hallucinations from the opera The Tales of Hoffmann. Two interactive areas let visitors immerse themselves in the horrors. In the more child-friendly version, kids can learn about nature and test their phobias by touching fake snakes they can’t see. The other is a peep show where viewers can look at evidence of Jack the Ripper’s crimes after pulling back a bloody sheet.

“We want to break down barriers for people, be the entrée,” Blake says of the thinking behind the Halloween exhibits. “So if they’ve never stepped into the new Tobin Center for the Performing Arts to see a play or a ballet, we’re still accessible to them. If we show how a costume is made from beginning to end or how a maquette functions, that can be captivating.”