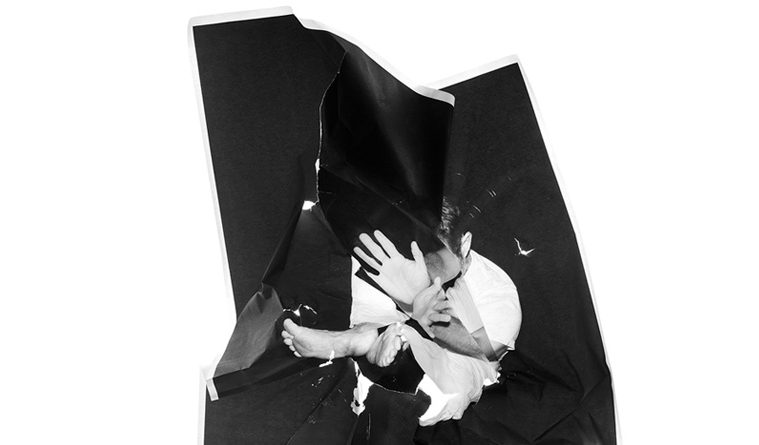 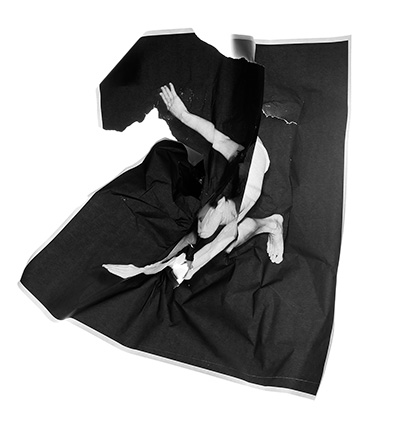 When Vinod Hopson of FotoFest suggested that I check out the work of Tad Beck, I figured dance was involved.   And indeed, Beck’s work with renowned downtown dancemakers is compelling on several levels, from the detailed process to the end image, which involves re-photography and some actual dancing.

His work is represented in the collections of the Worcester Art Museum, the Addison Gallery of American Art, the Los Angeles County Museum of Art, the Sweeney Gallery at the University of California Riverside, and the Portland Museum of Art, Maine, among others.

The New York/Maine-based artist visited with me via email about his process and the presence of the body in his work.

I was really glad that I saw your work before knowing anything about it. I had a visceral reaction, as if I could sense the physicality of the action contained in the photo. I really had no idea of what I was looking at, although I’m familiar with these fantastic dance artists.  It’s as if the dancer’s velocity was somehow translated into a visual record. As a photographer, you are in the capturing biz and as a dance person, I am in the motion biz, Your works seems to address the border.

TAD BECK:  That’s an interesting idea, I haven’t thought along those terms before. I love to push the boundaries of photography, so I think you may be picking up on that. I might agree that photography is not in the motion business. Motion is typically depicted in photography as blur, as most photographs are limited to a specific moment. But, I don’t really think of what I do as “capturing.” I tend to think of photography as an abstraction of the real, because of how it flattens, crops and locks a moment into place. Working in black and white takes this abstraction even further. Photography does document, but most of the subject eludes capture. Double Document is in many ways a collaboration between myself and my subjects, with each of us on either side of the border you describe. 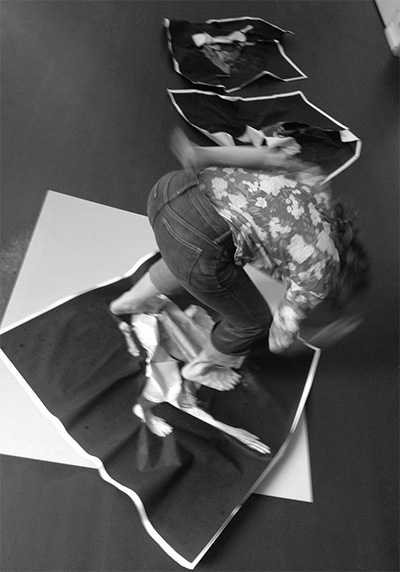 Capture is a harsh word. Flatten, crop and lock sounds way more poetic. You are right about eluding capture, too. This goes back to very first sentence in your artist statement, which states that you are “exploring photography’s possibilities by exaggerating its failure to capture.” Dance is actually an excellent platform to do just that. You do have a detailed process that I would probably mangle if I tried to explain. So tell us the actual process that yields the work in your Double Document Series. I found it fascinating.

I took photographs of dancers, choreographers, and performers executing either improvised or choreographed movements that were “typical” of their approaches.  A selection of images were printed at 42 x 42 inches and placed on the floor. The subjects returned to the studio and attempted to re-execute the original movements on top of the print, distressing and tearing the print. These distressed and torn prints were photographed with back lighting. The resulting, final images document movement in two ways: first as straightforward representation, second as sculptural trace.

If you can re-photograph, then I can re-see, which is exactly what I did after you revealed how these images were made. Knowing the inside story didn’t change the dynamic of my first experience at all though, but the paper really popped out for me. I find the turbulence of the paper quite exciting. I may even used that dreaded word “materiality.” There’s a lot of energy in a torn up, distressed photo with a dancer on it! How do you know when the paper has reached its end point?

One of the original inspirations for the series were the photographs found on the floor of Francis Bacon’s studio. I am interested in the abstracted figure created by the process of Double Document. While my subjects executed their movements for the second time on top of the prints, I would be watching the figure in the photograph. When a new abstracted figure came into sight, I would tell my subjects to stop.

When we chatted before your FotoFest talk you mentioned that the finished image is the size of the original image. This was important for you. For me, it evokes the sense of collapse even more. Talk about that choice.

I always think about scale. Scale creates meaning. While the size of the print that was danced on had logistical concerns, changing that scale for the final work did not generate ideas that benefitted the work. More importantly, at full scale the subjects’ movement can almost be felt when viewing the final works. 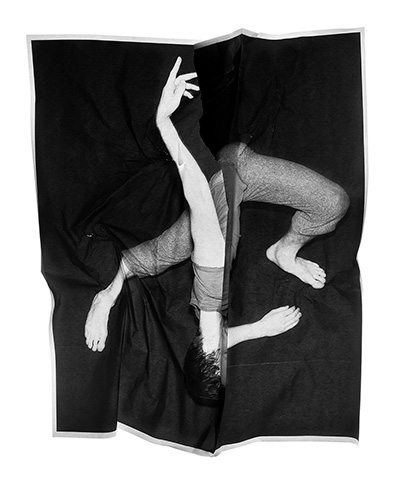 I always think about scale, too. Choreographers do too. What drew you to working with dancers and choreographers?

I had been exploring how the body communicates in photography for years, many of which were in Los Angeles. When I moved back to New York in 2011, I knew that my work would have to return indoors. I also looked forward to seeing more live performance. It occurred to me that the thriving contemporary dance world would give me access to people that would often understand the relationship of the body to meaning better than myself. The existing wealth of knowledge was the primary draw. I reached out to my friend Neil Greenberg, who was not only one of my first subjects, but also introduced me to the majority of the subjects that I ended up working with.

You are also showing another body of work, Blind Spot, your first without humans, or so you say. I feel the presence of the human loud and clear in that these are hand tools and the scale of the human is very present. They are also so beautiful, not unlike dancers! How did this series come about?

After twenty years of working with body as a subject, working with the tools as a subject was surprisingly difficult. I was learning a new visual language. I chose hand tools that I did not recognize because I was interested in the amount of misunderstanding surrounding my own work and labor in the studio. The tools were in part a metaphor and also an attempt to comprehend forms of labor that I did not understand. I may have cheated a bit in my move away from the body as subject, since the tools are an extension of the human body, but that does not bother me.

There’s no getting away from the body.

I think my own body came into these works as well. Cutting out the print of the tool, the application of spray paint and the waving of a dodging tool in front of the camera are all movements that can be seen in final works. The creation of visual depth in Blind Spot is from painterly devices, and one of the things I always think about when looking at painting is the scale of the artist. I often think about the dance or gesture of the application of paint to the canvas. 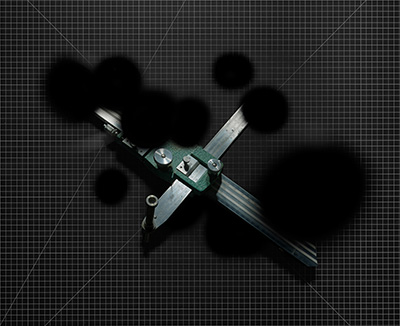 Yes, exactly! I had just seen the Still Life show at the MFAH and I was thinking about that looking at your images in Blind Spot. I also found a vibrant contrast between the quietude of Blind Spot and the momentum of Double Document, which are in conversation from across the hallway, and really with the rest of this outstanding exhibit. How was your Houston/FotoFest experience?

Steven Evans and the whole FotoFest team went out of their way to introduce all of the participating artists to the art world in Houston. I’ve never had an experience quite like it. I think Houston has everything an artist is looking for in a city: affordable space, tremendous exhibition opportunities, lively dialogue and strong private and public collections. Fotofest brought in curators including Anne Wilkes Tucker, Malcolm Daniel, Evan Garza and Rick Herron, that were all an honor to talk to about my work. Toby Kamps gave me a once in a lifetime tour of the treasure vaults at the Menil, and Bill Arning gave an exceptionally interesting tour of the Angel Otero exhibit at CAMH. I look forward to my next visit. I am the newest fan of Houston because of the generosity of FotoFest and the city as a whole.