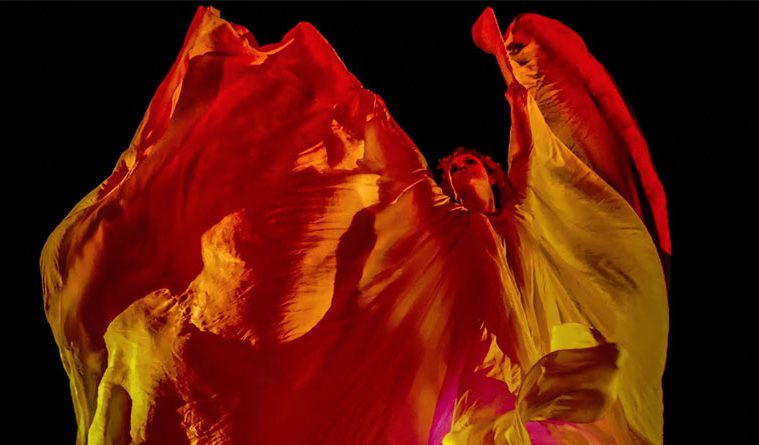 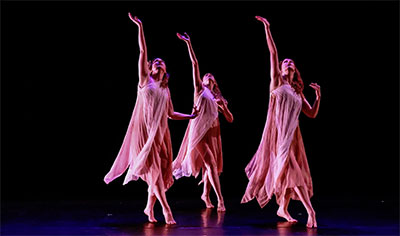 Isadora Duncan, Loïe Fuller, Erick Hawkins: Dance aficionados recognize these late choreographers as having played a significant role in the foundation and development of American modern dance. For Shay Ishii, artistic director of Shay Ishii Dance Company and lecturer at Texas State University’s Department of Theatre and Dance, this recognition sparked an idea — what if audiences could see works by each of these historic dancemakers on one program? In Dancestry, showing Sept. 11-12 at Texas State University’s Patti Strickel Harrison Theatre, you can.

“I have always been drawn to the historical figures in dance,” said Ishii. “I began envisioning a concert that would bring these three pioneers to life for contemporary audiences. Part of that vision was to illuminate the continued relevance of these historic figures, over a century later, to contemporary choreographers and artists. Hawkins, Fuller and Duncan have cohesive aesthetics and philosophical approaches to their art. They were a perfect fit.”

In addition to restagings of legacy works by the modern dance icons, Dancestry features new choreography by Ishii and colleague Meg Brooker, a former Austin-area dance artist and artistic director of Thel Dance Theatre, bringing the total number of pieces on the program to 11. 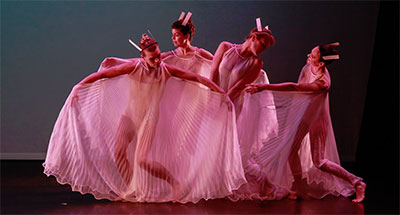 Ishii is already well versed in Hawkins technique and choreography — she’s been studying his work for 20 years, has understudied and performed in three of his pieces over the course of her career, and describes her own movement language as being heavily influenced by Hawkins’ style. However, she’d only “admired Fuller and Duncan from afar, from readings in textbooks and limited photographs and video footage of their work,” before beginning to work on Dancestry. The production has allowed Ishii, as well as Texas State dance students, to delve into Fuller and Duncan’s choreography; the students themselves perform in Fuller’s La Mer, for example. Collectively, the pieces on Dancestry’s programrequire a 30-member cast.

Perhaps the best-known choreographer on the bill is Duncan (1877-1927), referred to as the “Mother of Modern Dance.” She is famous for shedding her shoes and corset in order to create a technique based on more natural motion. Brooker, currently an assistant professor of dance at Middle Tennessee State University, will be joined on the stage for the trio of Duncan works by fellow Duncan-fluent dancers from Washington, D.C. and Chicago. There are no specific costumes or set designs to go along with Bacchanal, Furies and Chopin Suite, so Brooker designed and constructed the costumes herself, based upon Duncan’s general aesthetic. 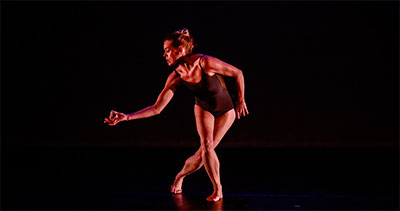 Katherine Duke in her solo Palace of the Wind.

“Duncan used the tunic in her costuming,” explained Ishii. “She was influenced by the dress reform movement at the turn of the 20th century to adopt the free-flowing, Grecian-inspired costumes. The reform also inspired her to lose the corset, allowing her to develop gesture in relationship to breath.”

The costumes and lighting design for the Fuller works, however, are re-creations based on thorough research. Because Fuller was particularly known in her era for her innovative theatrical lighting and costuming (she lived from 1862-1928), Lindberg and Slayter (professors of dance at Austin Community College and Western Michigan University, respectively) wanted to put forward the most authentic experience possible; their reconstruction work has garnered them grants from organizations such as the National Endowment for the Arts.

The restaging of Hawkins’ Plains Daybreak uses the original sets, headpieces and costumes from the Hawkins archive. Texas State faculty, students and alumni will be joined onstage by members of the New York-based Erick Hawkins Dance Company, directed by Duke, to bring the work to life. The music will be a live performance of the original Alan Hovhaness score, performed by Texas State student musicians. 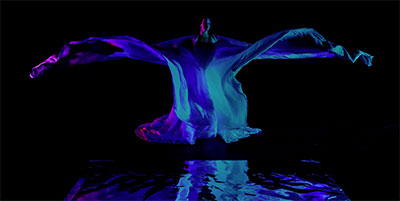 Jessica Lindberg Coxe in Loïe Fuller’s Lily of the Nile.

Among these classics will be two new works: Brooker’s Birches and Ishii’s Curve of the Earth. Ishii’s piece, a quintet, makes use of her dancers’ firm foundation in Hawkins’ thoroughly 20th century technique (he lived from 1909-1994).

Said Ishii, “My company members all come from a Hawkins background, sharing a common movement vocabulary and quality that conveys clarity and unity on stage. I would describe the movement quality as fluid, effortless, free flowing. The inspiration for the piece came from a lighting effect in the credits for a TV series. I wanted to experiment with a continuous flow of movement with lighting that comes in and out and shifts focus and direction, so that the choreography never stops but the audience only sees moments and flickers of the dance as the light passes by and selectively illuminates it.”

Illumination is perhaps a central objective of Dancestry — looking back to move forward, noting modern dance’s ancestry to illuminate its future.