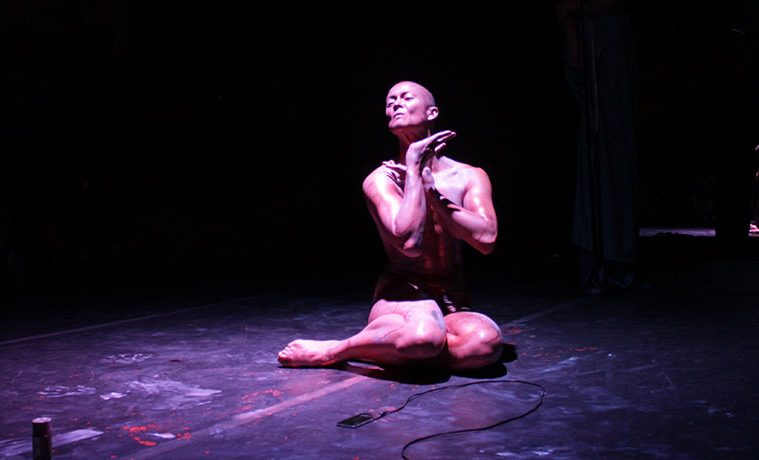 Wu Tsang with boychild at DiverseWorks 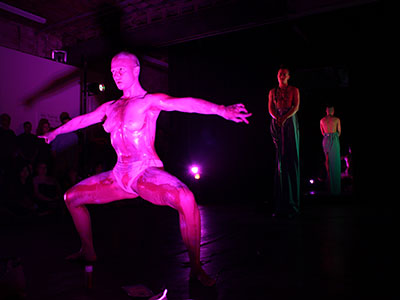 Los Angeles filmmaker and performer Wu Tsang has started a year-long project, commissioned by DiverseWorks with the University of Houston Cynthia Woods Mitchell Center for the Arts and the Contemporary Arts Museum Houston. Moved by the Motion, which winds up it’s run at DiverseWorks on May 2, is the first presentation in this serial project. Future components will premiere in Houston into 2015. Tsang comes to Houston with a resume that includes the Museum of Modern Art (New York City) and the Tate (London), as well as many other international museums and film festivals.

Moved by the Motion has two components, a video installation at DW, and a one-night only performance, presented on April 12, also at DW as part of the Cynthia Woods Mitchell Center’s CounterCurrent14, their first performance art festival.

The two pieces, while exploring similar territory and created at the same time, were also quite different and could be taken in separately, each on its own. First, the performance.

We entered the DiverseWorks space to find it arranged in a U-formation—a performance space surrounded on three sides by an audience space little wider than a standard sidewalk. In the performance space, two full-length mirrors faced each other, the one at the bottom of the U-shape being a two-way mirror so audience at that end can see through the stage piece. In front of the other mirror was a microphone stand, raised high. The performers, Tsang and boychild, both move casually through the performance space, checking props, passing through the gathering audience. Moving around the space, I find there is no place to stand without light shining in my eyes. 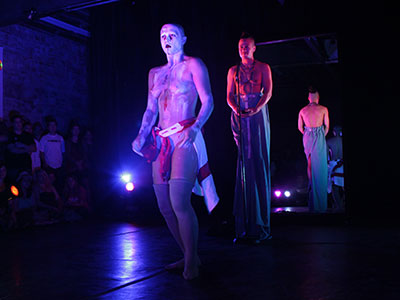 When the performance began, Tsang stood at the mic, atop a prop that was obscured by long, flared pants, giving him the appearance of extraordinarily long legs, out of proportion to his relatively short, naked torso.  He never leaves this position for the duration of the performance.

In contrast, boychild wears white pants with a shirt reminiscent of what racecar drivers might wear, with the provocative number “69” on it. Her shoes are hiking boots. As the performance progresses, she removes pieces of the costume until she is in a tight, brief-like garment.

Let’s get this one bit out of the way: Moved by the Motion has many of the cliches or conventions (depending upon your point of view) of performance art. There is body painting/smearing. There is semi-nudity. There is screaming and writhing.

More than that, however, there is in this piece a humanity and tenderness that slips up on the audience and pounces with little warning. Much of this comes from the presence evoked by Tsang, who acts as something of a concerned watcher or a guiding angel. It’s a dynamic that raises the piece above pedestrian angst. These performers are leading us through a journey.

The textual exchanges between the performers are poetic, enigmatic, and open to interpretation and application. Much of what is presented can be interpreted as being about Tsang’s journey toward his self-understanding and self-acceptance as a trans man. The text, however, brilliantly does not concretize that interpretation with words. We get oblique phrases such as, “It’s like tall grass, clothes off,” or “It’s like holding hands,” or “Waiting is worse than being hit.” There are playful moments, too, as when boychild says, “It’s like—what’s that painting?” Tsang replies, “The Scream?”  “That’s it,” boychild says, giving us levity before agony. 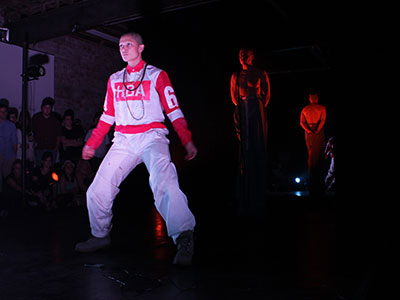 There are more subtle moments of humor. There is a sequence when boychild, topless, spray paints her nipples black and adds a smile on her belly, creating a smiley face on her torso. She then spray paints a horseshoe mustache and Groucho Marx eyebrows on her actual face. She’s testing out these changes, mugging in the mirror, posing. I found it comical but as I looked around the room, I saw only one other person smiling, another cisgendered man. I wondered if I found it humorous out of cis privilege or because I have a dark sense of humor. Definitely, the humor had a dark edge, if it was intended humor at all.

Whether autobiographical or a fictional construction, the live performance piece of Moved by the Motion left open spaces for personal connection. Speaking personally, I found much in the text and actions that resonated with my experience as a gay man. Looking around the room of engaged faces, I feel safe saying other people found resonances for their own life. The journey was hard—this was no simple walk through a easy life—but the interplay between the questions and pain presented by boychild and the calming, zen-like voice of Tsang led us to a place that had some peace, if not complete resolution.

Late in the performance, there is a sequence that has Tsang saying, “That face you make,” and boychild replying with mugging into the mirror. “This face?”

At the end, we return to this exchange about faces, and we are left with this line: “That face you make, unmarked, unaware.” I left the performance pondering the image we all would find if we could catch ourselves so unguarded.

The video installation consists of a set up that echoes the performance. There are mirrors, facing the two screens where two videos are projected simultaneously. In this case, there is a large cushion in the middle for audience to sit on, boxed in by the two screens and two mirrors. Depending upon which direction you face, you may be seeing the projected images in reverse in a mirror, with your own image in front of it. If you wandered around behind the screens, you could see the image projected through the screen but also its reflection on the mirror facing it on the other side of the room, creating a double image. During the 20 minutes of video, there might be only one screen lit up, but most often there was action on both screens.

A third place to focus attention was on the wall of the room. The more narrative of the two screens had dialog projected on the wall, a sort of supertitles, but to the left of the screen. With so many places to look, it is an installation that requires multiple viewings to absorb all of it.

As noted above, one screen is a narrative, entitled A day in the life of bliss. It impressionistically follows a character, BLIS, played by boychild. In a slightly futuristic world, BLIS wakes up, dances in her apartment, dances with friends in a dance class, playfully and outrageoulsy dresses up with friends for a night out in dance clubs. The dialog projected on the wall is written in the style of phone texts, with abbreviations like ‘UR.” Later, in the club, there is some spoken dialog as well, when police raid the dance club and characters shout “Let us be!” as the police use tasers on them and tie their wrists together. Seemingly, BLIS puts an end to the raid simply by demanding, “Untie us!” The police obediently loosen everyone’s zip-ties.

On the second screen, intermittently, we see what appears to be documentation of a live performance, echoing the live performance described above. There is body paint, there is writhing and screaming, there is a jerky, nearly robotic movement vocabulary.

Taken together, the two pieces bear witness to the violence, physical and psychological, perpetuated against people who don’t conform to the dominant culture. The film highlights this most, with the added component of looking at where and how the “nonconforming” people gather and celebrate their lives—despite the threat of raids by the status quo.

Taken separately, the video installation is the more bleak, less hopeful of the two. While both gave us access to our shared humanity, the live performance led us more completely through the hurt of being an outsider, led us to a moment of transcendence with “the face you make” when you’re not trying to be other than you are. The ending of the film, with the line “This is bliss,” feels more ironic, less sincere, less transcendent.

The tension between the two, nonetheless, feels true. The layers of emotion between the two endings speak to the cyclical nature of transcendence, bliss, peace. We don’t live in those places for very long, particularly if we don’t conform to the dominant culture.

Perhaps the irony is that we ever find transcendence at all.