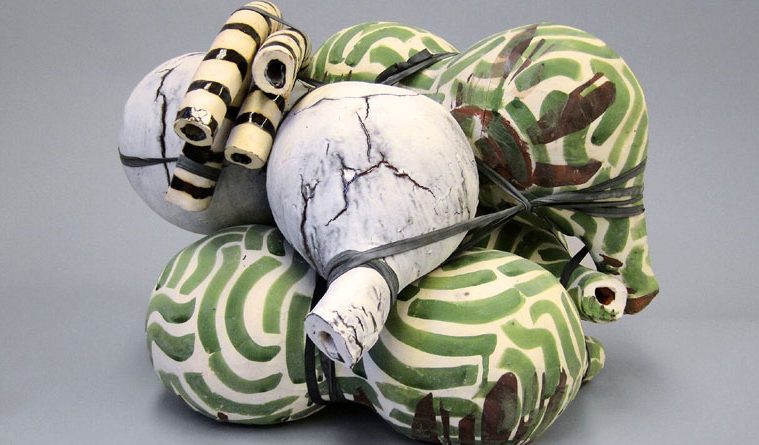 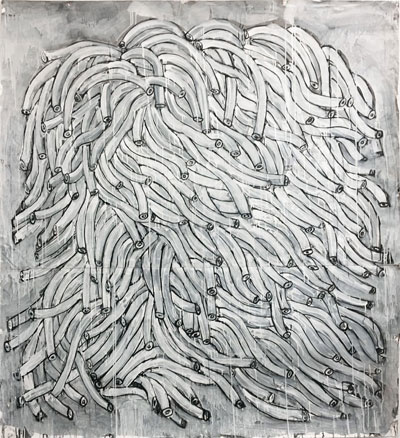 Even as an undergrad, ceramic sculptor Annabeth Rosen was known as a “rabble rouser” for constantly testing the limits of clay.

“It’s her nature, and you can see it in her work,” said Valerie Cassel Oliver, former senior curator at the Contemporary Arts Museum Houston, during a recent return to install Rosen’s first major survey, on view Aug. 19 through Nov. 26 at CAMH. “There’s a space in which the limits and boundaries don’t exist. She just keeps pushing beyond those.”

Along with more than two decades of both intimately scaled and monumental ceramic sculptures, Fired, Broken, Gathered, Heaped includes Rosen’s works on paper, “which in many ways are studies for the sculptures but in other ways are very autonomous bodies of work,” Cassel Oliver said.

“Her nature is constant, perpetual movement, but she said something very interesting about the need for ‘muscle memory’ in terms of creating forms,” Cassel Oliver continued. “The drawings act as a prelude or a forerunner to creating muscle memories of what she wants the sculptures to be.”

Rosen’s sculptural forms are created out of either terra cotta clay or white slip clay and various experimental glazes. Early works, such as an unusually thick scallop-edged plate, are “about the accumulation of material to really challenge traditional ideas of what functional forms look like,” Cassel Oliver said. “When we think about plates, we think about these slender, very delicate pieces of ceramics that our food sits on. Sometimes they’re very basic; sometimes they’re very elegant and ornate.”

Rosen’s plate, on the other hand, is “so thick it’s preposterous that this is a plate,” Cassel Oliver said.

As Rosen progressed, she began creating works “where you start to get the accumulation of things on the surface,” Cassel Oliver said, citing Classical Order: Red, Yellow, Orange Enamel, in which something that could have could have started life as a preposterously thick plate seems to have sprouted a colorful mound of spherical, spiraling forms. 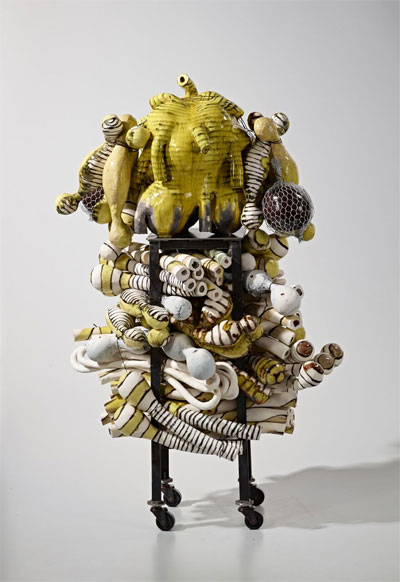 At times, the accumulations have taken on monumental forms—so monumental that CAMH will have to present a truncated version of Sample, a massive, installation of varying numbers of tile slabs built up into high reliefs on wire legs. Though Sample has been exhibited with as many as a dozen slabs, CAMH is limiting its grid formation to about eight slabs to fit it into the survey.

Increasingly baroque works in which forms are heaped on one another and bound together with steel baling wire abstractly address the precarious nature of Rosen’s additive style of construction—and of life itself. A 2014 video uploaded to Vimeo by Australian gallery Beam Contemporary Art shows Rosen in her studio surrounded by innumerable biomorphic, twisted, tubular, or just plain eccentric forms—some already fired, some not. In many cases, the forms have been broken, reassembled, re-glazed, and re-fired, reflecting Rosen’s determination to make them as malleable as wet clay. Sometimes she adds wet clay to fired pieces.

Rosen may have been deemed trouble in the traditional but well-regarded ceramics program at Alfred University, but in 1978, the year she earned her undergraduate degree, she was included in her first group museum show, a works-on-paper exhibition at Buffalo’s prestigious Albright-Knox Art Gallery. She enjoyed greater freedom at Cranbrook Academy of Art, the renowned graduate school near Detroit. (Fittingly, Rosen’s CAMH survey will travel to Cranbrook Art Museum in 2018.) Jun Kaneko became an important mentor—a relationship that Rosen has paid forward through her own dedication to teaching at the University of California, Davis, where she’s held the Robert Arneson Endowed Chair for 20 years.

“Cranbrook was founded on the Bauhaus model. It integrates design and textiles and ceramics, so Cranbrook was a big eye-opener,” Cassel Oliver said, adding that Rosen’s background in a New York City “family of makers” and experience as a milliner and as a production assistant at Philadelphia’s Fabric Workshop have also informed her practice.

“Her mom is a designer of children’s clothing and later was in admin at the Fashion Institute,” Cassel Oliver said. “Her dad was always in the basement making things. That wasn’t his profession, but he would spend his evenings and weekends downstairs resolving issues by just creating things—sculptures. Her grandparents were also involved in the fashion industry. So this idea of tinkering and making, she literally grew up with it.” 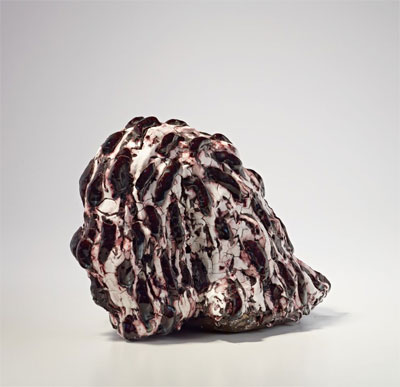 Although Rosen has exhibited consistently throughout her career and had work acquired by major public collections including the Museum of Fine Arts, Boston; the Philadelphia Museum of Art; and the Los Angeles County Museum of Art, “in terms of having huge survey exhibitions, that’s not something that’s ever happened, for some strange reason,” Cassel Oliver said. “But that’s why I’m here.”

These days for Cassel Oliver, “here” is the encyclopedic Virginia Museum of Fine Arts in Richmond, where she was recently named curator of modern and contemporary art. (Following up on her July “soft move” with a final exit from her Houston house was also on Cassel Oliver’s to-do list during the Rosen survey’s installation period.)

While being a neighbor of the Daughters of the Confederacy “has its moments,” Cassel Oliver quipped, part of Richmond’s appeal for her is its long history—as of 2019, the first African slave will have arrived 400 years ago—and the chance to play off that.

“I believe that’s why the mandate is as it is, which is to broaden conversations around art to be more inclusive,” Cassel Oliver said. “Because it has this history that it is reconciling with—and that’s a good thing.”