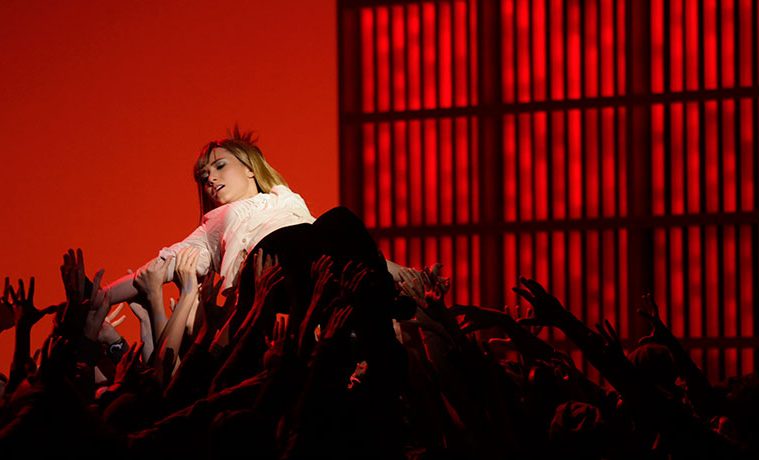 New Opera for a New Millennium

The Dallas Opera presents Tod Machover’s Death and the Powers

IMAGE ABOVE: Joelle Harvey in Death and the Powers. Photo by Jonathan Williams. 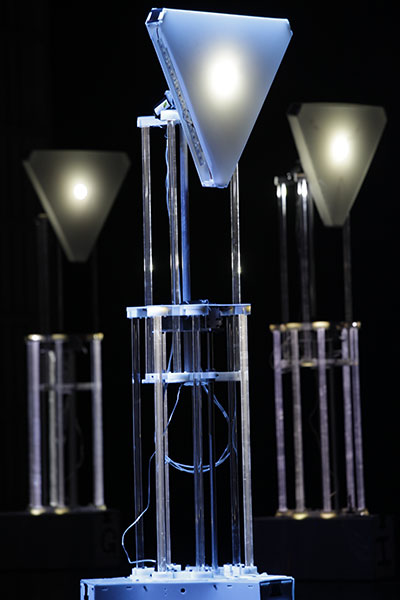 From Death and the Powers at Dallas Opera. Photo by Jonathan Williams.

Imagine: it’s an evening in Spring, and stars dot the city sky. Clusters of friends gather in a park, picnicking and chatting. Across the green expanse, an outdoor movie screen and state-of-the-art audio system stream a live performance of Death and the Powers, a new opera by composer, inventor, and formidable tech maverick, Tod Machover. Via smartphones and tablets, participants influence action on the stage many miles away, and share the evening’s experience with pals across the globe on social media. It’s the 21st century, opera is changing, and Machover is on the vanguard, intent on pushing far beyond the current boundaries of technology and performance practice.

As a visionary in tradition-defying music and innovative performance technology, Machover is Professor of Music and Media at the MIT Media Lab and Director of MIT’s Opera of the Future Group. Among his many achievements, Machover has composed for luminaries such as Yo-Yo Ma and Joshua Bell, and has been commissioned by the Los Angeles Philharmonic, the London Sinfonietta, and Houston Grand Opera. Death and the Powers comes to the Dallas Opera this month, Feb.12-16, with Machover and his team creating a fully “wired” work: a live performance and interactive HD simulcast promising a genre-bending experience, one that will open the art of opera to new audiences.

Death and the Powers is a full-evening, one-act opera which tells the story of Simon Powers, a rich businessman and inventor who forestalls mortality by “downloading” himself into his environment. His “transformation turns every object in his surroundings—such as his books, furniture and walls—into a collective, living version of himself, called The System”, the synopsis describes. Powers’ age-old quest for immortality continues to remind us of our own human fragility. 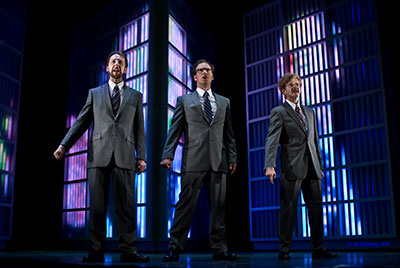 Death and the Powers, Dallas Opera. Photo by Jill Steinberg.

Machover’s marriage of music and technology may transform opera for a new generation, yet maintain the art form’s unique ability to plumb human experience. Death and the Powers is described as having the “pacing of a movie”, and it’s exciting to see this popular aesthetic coming to the operatic stage, fused with the contemplative questions the opera raises. I wonder at the divide between entertainment and spectacle, and the role of the composer in engaging with the bigger dialogue that the arts and humanities offer.

“The most interesting experiences—artistic or otherwise—always combine transformative, meaningful ideas with dramatic, direct expression. Think of the ‘3 B’s’ in music, who for me are Bach, Beethoven…and The Beatles,” says Machover. “All three combined these qualities to perfection, literally, although differently in different works and in different parts of their lives and careers. In fact this balance is very difficult to achieve, especially in our time when attention spans are short and commercial pressures are enormous. Opera that gets the balance right will always find an audience.”

Death and the Powers may, indeed, skillfully strike this balance by breaching opera’s current limitations and redefining the genre via its interactive simulcast experience. In the simplest of terms, the simulcast will reach beyond the opera house walls and expand the size, and experience, of the audience. Machover elaborates, “Simulcast viewers get to see different points of view that would be impossible to show in live theater. These are sometimes viewed on the collective large screen, sometimes on individual mobile devices.” This connectivity, and the casual, un-venue atmosphere of community interaction will play into the new music-theater-tech experience, “…the social circumstances are different in a remote venue, and allow for exploring new relationships between audiences, performers, and art works themselves,” Machover asserts. 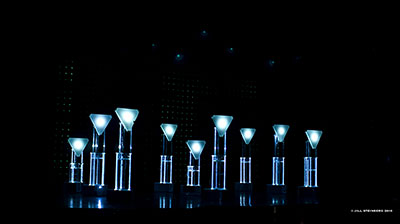 Operabots from Death and the Powers. Photo by Jill Steinberg.

The interactivity will influence the live performance itself, says Machover: “Audiences are offered the possibility to contribute to the performance, using their mobile devices to change the physical behavior of the Moody Family Chandelier [one of the impressive audiovisual set pieces] back in the Winspear Opera House.” This interactivity allows for audience experimentation, participation, and a sense of fun that few (if any) venue-bound performances offer.

Yet, we mustn’t forget the heart and soul of the operatic art form: the voice— arguably the most unique of all human traits. Death and the Powers inventively, and uncompromisingly, melds singer to technology.

“The human voice is the most intimate and powerful instrument that we have,” says Machover. “We use a variety of techniques in Death and the Powers to analyze and extend the voice of the main character, Simon Powers. We measure all aspects of the singer’s voice, but also his movements, muscle tension, breathing, etc. Simon makes his new presence felt through these extensions of his voice. The voice is indeed our most powerful tool for communication, but it is also our most sophisticated instrument for internal reflection and intervention.”

Dallas Opera has assembled a magnificent cast for its four performances of Death and the Powers: the acclaimed baritone Robert Orth sings the role of Simon Powers; Mezzo-soprano Patricia Risley sings Evvy, Simon’s third wife. Soprano Joélle Harvey and tenor Hal Cazalet round out the cast.