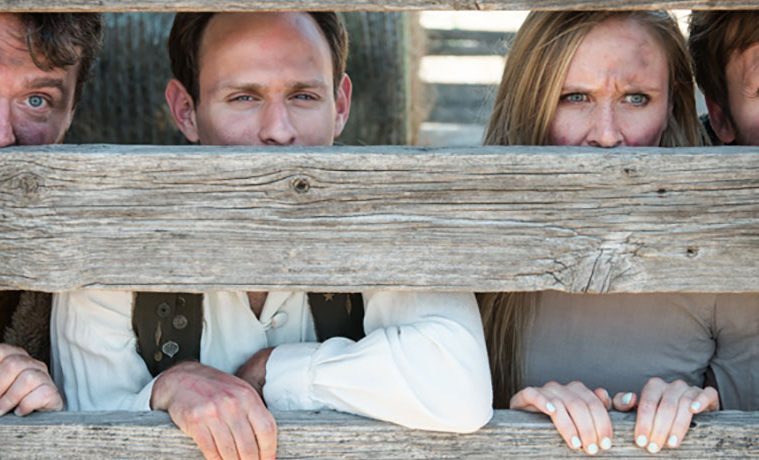 IMAGE ABOVE: The cast of Amphibian Stage Productions’ The Nosemakers Apprentice: Chronicles of a Medieval Plastic Surgeon. 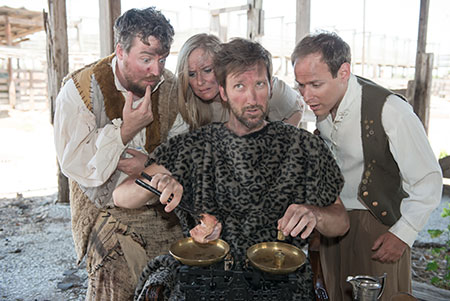 The cast of Amphibian Stage Productions’ The Nosemakers Apprentice: Chronicles of a Medieval Plastic Surgeon.

Don’t be deceived by the title of Amphibian Stage Productions upcoming play, The Nosemaker’s Apprentice: Chronicles of a Medieval Plastic Surgeon. It’s not for children, although, as the name suggests, the play is a fairy tale of sorts.

“It’s a dark comedy with a Monty Python/Mel Brooks sensibility,” according to New York based director and teacher David Miller, who will be directing the show, which runs July 10-Aug. 10.

Miller, who has been directing a play a year (on average) for Amphibian for about ten years, says Artistic Director Kathleen Culebro found the script accidentally, while digging through the Samuel French library.

The play opens on a father (present-day) who weaves a bedtime story of sorts for his daughter, intended to justify his unlicensed plastic surgery practice. The story he tells details the history of the heroic Gavin who, from inauspicious beginnings, rises to become one of the finest ‘plastic’ surgeons in medieval Vienna. Plastic surgery isn’t exactly the stuff of children’s fairy tales.

Despite its rather far-fetched premise, Culebro fell in love with the script and asked David to direct (he quickly agreed). If their excitement for the play, and track record, are any indication, audiences are in for a good time.

It’s smart, it’s funny, and it represents what Culebro looks for in many Amphibian plays, according to Miller, a “really good mixture of high-brow and low-brow humor.”

That sense of humor, and the willingness to take a chance on plays many theater companies would shy away from, help to define the Fort Worth based theater company that has become a staple for theater audiences west of the Trinity River. While comedy is present in many Amphibian productions, the company’s mission “is really to produce plays that challenge the way we see the world around us,” according to Culebro.

“We won’t tell you what to think,” she says, “but I like plays that will inspire a lively argument with your spouse or friends when you walk out of the theater.” Culebro’s background as a playwright inspires another aspect of the company’s programming philosophy; Amphibian produces new plays almost exclusively.  “I’m a playwright, so I believe in under-produced plays,” Culebro says. “I like to build relationships with playwrights, and help them cultivate and produce their work.”

A recent example is playwright David Davalos, whose comic play about Leonardo Da Vinci Culebro and team are currently workshopping with hopes to stage at least a reading, if not a full production in 2015. Amphibian, like many artist-established and artist-run theater companies, was launched on a whim and may have one of the most unlikely Artistic Directors in the metroplex at its helm.

Culebro came to theater a little later in life. After traveling the country and putting her now ex-husband through medical school, Culebro landed in Fort Worth, where her obsession with writing plays and her close proximity to Texas Christian University (TCU) and her sister combined to launch Culebro’s theater career.

“I used to drive by TCU’s theater and see the stagehands inside working,” Culebro says, and after some prompting from her sister, she signed up for a class. One class turned into many more until Culebro and some of her fellow students decided to stage a play of their own for which TCU graciously donated space. In a nod to the horned frogs of TCU the group named their little troupe Amphibian and produced their first play in 2000.

And that’s how it started. For the first few years that’s what Amphibian looked like: Culebro’s fellow students would head off to graduate school, then return to Fort Worth for the summer to stage a play. Then the group began producing a yearly play or reading in New York City, in addition to their annual play in Fort Worth.

At the time, Culebro says, “We believed we needed the experience of producing in New York as a resumé builder.” But after a few years of expense and heartbreak Amphibian realized their home was in Fort Worth. “We realized we could actually have an impact here,” Culebro says.

One play a year eventually became a full season, which included, apart from their own productions, a number of community events ranging from readings at the Modern, which Amphibian still produces, and a partnership with the National Theatre of Great Britain, whose work they also screen at the Modern.

In 2008, Amphibian moved out of their temporary space at TCU into the Fort Worth Community Arts Center’s Sanders Theatre where they stayed for five years. In 2012, Culebro’s highly- invested board members launched a capital campaign to buy a building in Fort Worth’s up-and-coming Southside neighborhood. Culebro’s husband, an architect, designed the build-out for the older building. The 2014 season is Amphibian’s second in its new home.

There’s still some work to do, money to raise, the usual, but in the 2012-2013 season the company saw an 80% increase in ticket sales and a 30% increase in membership—all this as the world collectively wonders how to expand the theater audience. “If our time at TCU was our adolescence, our time at Sanders was high school or college,” Culebro says, implying that despite unquestionable success, Amphibian is just entering its prime, a fact some events on Amphibian’s horizon will attest to.

Culebro recently commissioned playwright Brenda Withers to write a family-friendly version of Don Quixote. The play, according to Culebro, will be “a visual feast,” and the hope is to tour the show throughout the country. The play will also serve as the perfect showcase for Amphibian’s stilt-walkers. Yes you read that right.

In 2008, with the help of her sister, Culebro brought the Brooklyn Jumbies, a group of artists based in New York who perform utilizing numerous cultural elements of the African Diaspora, including stilt-walking, to Fort Worth area schools. Children, unsurprisingly, loved the experience. In fact, they loved it so much that despite the cost and effort associated with bringing stilt-walkers to schools, Culebro can’t stop.

This year Amphibian is also launching a series of public speaking workshops geared towards business owners, a business-savvy way not only to reach the business community, but also to utilize actors’ unique talents and provide them with an additional source of income. “I think there’s a particular audience and a particular relationship with them that Kathleen has cultivated,” says David Miller. “She really takes the audience into account.”

Whatever it is—Culebro’s background, her desire to cultivate a relationship with the audience, her uniquely curated seasons—Amphibian Stage Productions has established itself as one of Dallas/Fort Worth’s most exciting young theater companies.