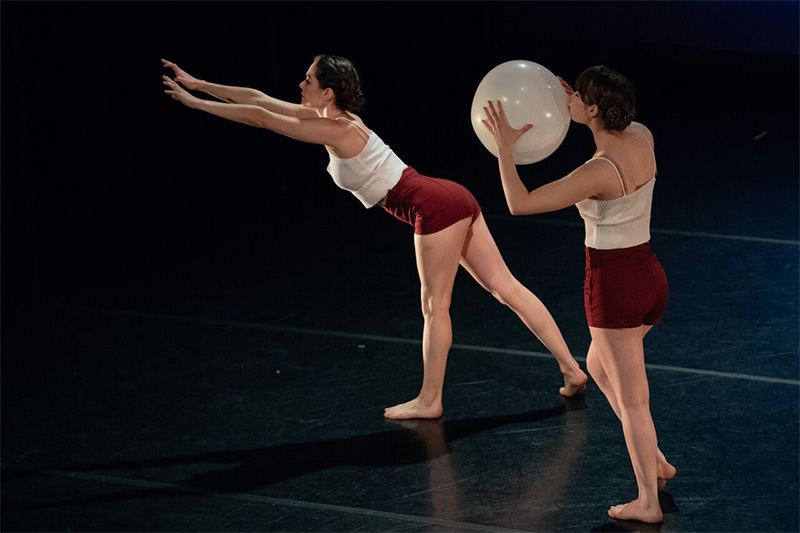 From Houston, Austin, and the Dallas area, Texas choreographers are exploring and investigating  new opportunities within the Texas dance landscape.

We visited with six different start-ups: Jacquelyne Jay Boe and Transitory Sound and Movement Collective in Houston; Bombshell Dance Project, Full Circle Dance, and B. Moore Dance in Dallas; and Frank Wo/Men in Austin. Spearheaded by artists at all different points in their careers, newcomers cite collaboration as a primary impetus for their formation, and seasoned veterans finally settle into their voice and vision.

While Jacquelyne Jay Boe is primarily known in Houston as a company member of Frame Dance and Hope Stone Dance, she has been making original works since 2014. Her decision to start creating work grew organically. “It comes from a desire to consistently be in a process with like-minded artists and to create work that I enjoy dancing and experiencing,” Boe says. “Instead of waiting for the opportunities to be presented, I strive to create the opportunities that I seek.”

Boe cites collaboration as a key part of her process, adding, “My preference is to work first-hand with artists who have mastered their disciplines and allow them to use their artistic voice through their chosen medium to give the work greater depth.”

Her most recent efforts include the creation of two new evening-length works, Color and Soft Jaw, the resetting of an existing work, and the co-founding of a choreographer’s collective called Perspective Exchange. “The intention of the collective is to give audiences an opportunity to witness women, unbound by distance or ceiling, while allowing the choreographer to explore and create without limitations,” says Boe. “I am a part of a movement that gives audiences an intimate experience that is immersive and envelops their senses. We all bring our unique perspective to our creations and increase exposure of the performing arts in Houston.”

Transitory Sound and Movement Collective (TSMC) is part of that same wave in Houston. Started by sound artist Lynn Lane, the go-to arts photographer, TSMC involves artists of all mediums, which results in a highly experiential performance, guided by improvisation. “I felt that our collaborative process would open up a new dialogue between artists of various disciplines and allow more cross-pollination into new audiences and engaging them in new forms,” says Lane.

Founding member turned co-collaborator Jennifer Mabus has been involved throughout the group’s process. “In the earliest collaborations that I experienced with Lynn, I was struck by how much communicative power the work had because of the multiple, focused, and creative minds,” says Mabus.

Now two years old, TSMC is honing its mission. “I made the conscious decision this year to create more of a core group within the Collective and invite additional collaborators in for specific projects rather than [forming] basically a new group for each project,” explains Lane. “This has allowed us to push the forms and develop each work with more rigor. The next step involves exploring creating new works in and around Texas as well as out of state with a goal of creating work internationally.”

Another collective, this one out of Austin, Frank Wo/Men is the love-child of four individuals: movers Kelsey Oliver and Alexa Capareda, theater artist Roberto Di Donato, and technical designer Chris Conard. As indicated by their mission statement, Frank Wo/Men aims to: “create, generate, and develop ideas, recognizing that novelty and innovation are fruits of risk-taking; harness the rawness of artistic impulse and the spontaneity of cross-discipline collaborations; and connect with diverse communities and produce work that is socio-culturally attentive.”

Frank Wo/Men solidified its existence in 2017 after the successful completion of a passion project titled Loose Gravel. According to Oliver, it was after this experience that they decided they liked working with each other and wanted to continue doing so. Capareda added, “It just kind of happened; we liked what we did and wanted to keep doing it.” Frank Wo/Men is not your standard dance project or underground theater troupe. According to Oliver, they fulfill the niche of “highly physical, theatrical performance art.” She further describes it as a collection of “theatre-loving weirdos that are down to get some sweat on ‘em, and dance-loving feins that are down for some stupidity.” After receiving an overwhelming positive response to their landmark production of Loose Gravel, and then consistently selling out their second work Tiskettasket, the members of Frank Wo/Men figured they were on to something.

Capareda attributes part of their success to Austin itself. “Austin has an art community that values the ‘liveness’ of performance, weirdness, and seems to support the sort of renegade, DIY, make-it-happen kind of art and experimentation.” When discussing the positives and challenges of not only creating this type of art but also having four active co-founders, Conard claimed that the most rewarding aspect is, “the raw, collaborative creation even when it’s messy.” Di Donato added, “The fact that we are writing our own rule-book is exciting but is proving a challenge because we cannot follow in someone else’s footsteps.”

Dallas-based Bombshell Dance Project co-founders Emily Bernet and Taylor Rodman are both former members of Dark Circles Contemporary Dance (DCCD). They cite DCCD Artistic Director Joshua Peugh as a mentor, and their involvement in his company allowed them to pick up a few tricks of the trade prior to forming their own project. While being members of the same company certainly provided Bernet and Rodman the opportunity to explore creatively together, their connection began prior to DCCD. Both former students of Booker T. Washington High School for the Performing and Visual Arts, Bernet recalls, “We spent many a lunch hour creating new phrases and dreaming up crazy projects,” However, it was during their time between DCCD rehearsals that those dreams began to take form.  “That was when we started to realize that we had a strong vision for the kind of work we wanted to create, and that we had an interest in jumping into the North Texas dance scene ourselves.”

Launched in 2016, Bernet describes their vision for Bombshell Dance Project as “an organization that’s focused on collaboration and investigating the female voice” and that their work is characterized by “big, expansive, explosive movement.” Bernet and Rodman are also committed to their community. In addition to their main company, they also run a second company each summer for young, female dancers ages 15-18.

Exploring the all-female approach in her own way, Tiffanee Arnold found herself creating her own dance company after a successful performance at the {254} Dance Fest in Waco, TX, that resulted in her winning the 2017 Best of Fest award. Riding that momentous wave, Full Circle Dance of North Texas was formed in the summer of 2018.

Arnold has worked for over 20 years as a dance educator and was also a long-standing company member and guest choreographer for Elledanceworks. Having made works for several institutions, Arnold is thrilled to be learning a new role as artistic director and is committed to her artistic vision. “I am proud to provide dance that is accessible to a variety of arts supporters,” says Arnold. “I pride myself in maintaining a vision to make dance accessible, thought-provoking, artistic and entertaining, while pushing boundaries and typical views of dance. I hope to create an audience community and not just an audience.”

2018 also brought the Dallas area another new company, B. Moore Dance, founded  by Bridget Moore, former member of Ronald K. Brown’s company and artistic director of Dallas Black Dance Theatre. The company will be a home to the  many works she has created as a freelance choreographer. Her plans to start her own company began during her time in South Korea as a visiting artist at Sungkyunkwan University. When recruiting dancers for her newly-formed company, she didn’t conduct auditions because she wanted to work with individuals who were familiar with her process and choreographic work. “Six out of the ten dancers of B. Moore Dance are Dallas natives, including myself. We represent the cultural fabric of its communities and the growth and development from them,” says Moore. “The organizational goals are to create new collaborative and cross sector, community engagement projects, construct initiatives that support and empower the next generation, as well as expand worldwide visibility and exposure through national and international touring.”

The number of new and varied companies and projects, in addition to the long-standing institutions, speaks to the strength and vibrancy of Texas’ dance ecology. Hopefully, Texas will remain a friendly home to artists and that, with time, we see those institutions sustain, these new troupes remain, and new projects emerge.