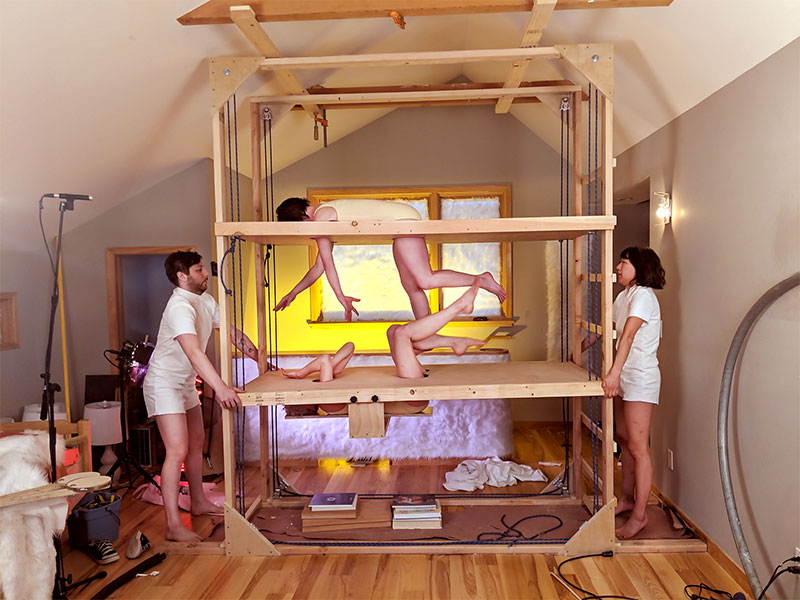 Nudged Out of the Cloud: Michelle Ellsworth’s The Rehearsal Artist and Post-Verbal Social Network

In one more step towards the antiseptic future envisioned largely by sci-fi movies- a future without dust, disease, age or decay-the very language we invent for our technological revolution has become disembodied and etherealized. “Cyber” and “wireless” and “cloud” are terms we use to tell a fundamental lie, especially because these things are very much grounded in the physical realities of fiber-optic cable, lines stretching thousands of miles under the oceans, and toxic garbage generated by rapidly defunct technologies. Enamored by the slickness of a screen, we forget the immutable physicality of all human realms, including the digital. Michelle Ellsworth’s latest works, The Rehearsal Artist and Post-Verbal Social Network, nudge the viewer out of the “cloud” with a grin, into an algorithmically dictated land of sweat, bruises, and perplexingly, donut holes.

Imagine watching a sport for which you have no cultural context. A live performance of the Post Verbal Social Network is something like this. Ellsworth, a professor at UC Boulder, presented this mammoth, site-specific installation at Seattle’s On The Boards. It was closely followed up by a second showing at Fusebox Festival in Austin. At On The Boards, nestled at the foot of Seattle’s Queen Anne hill, the performers were lithe and dressed in genderless white jumpsuits. They were also covered in dozens of bruises, the results of their athletic execution of Ellsworth’s precisely dictated maneuvers.

Dancers enacted a sequence of movements, moving sweatily through a kind of open-faced human-sized dice, with heavy-duty cardboard concrete tubes offering exits on each of the cube’s sides. A calm female voice, reminiscent of 2001’s Hal, recited numbers and positions that initiated the performers’ actions. Live performances were videotaped and played back, sometimes in a grid format reminiscent of an infinite ant farm. Performers climbed through the top, back and sides of their brightly lit cube, pausing to interact momentarily in ways that suggested the wrestling of grubby children or momentary lovers.

Viewers at On the Boards were not absolved from participation in Ellsworth’s dada-ist relay. The venue’s labyrinthian structure required that you move from space to space, up and down staircases and through darkened rooms to experience the installation in its entirety. The many bathrooms that punctuate On The Boards doubled as staging areas for Ellsworth’s sculptures, many of which are interactive. If seeking refuge in the seemingly only “private” restroom on the premises, a viewer would have found it equipped with a white fuzzy noise-activated cube that literally “shushed” any noise you might make. Try not to giggle. At one point during our wanderings, the performer herself was wheeled past us. She appeared to be vice-gripped nude to a table on casters. “Wanna donut?” she inquired without affect. Above her backside was a pedestal table full of donut holes. We politely declined.

It’s impossible to deny the exhilarating and offbeat humor nature of this work. It found viewers in the trepidatious way they were forced to navigate the space, it hid around every corner. Videos peppered throughout the installation and mounted within plywood viewing boxes often included rudimentary-looking knobs, so viewers could speed up or slow down the action, or otherwise affect the dancers inside. In these pre-recorded performances, characters dug in the sand with giant teaspoons, or sparred against one another to a metal soundtrack, wearing specialized suits, each equipped with a single floppy arm.

In each video, Ellsworth and her performers were doing things that looked incredibly physically taxing. They were laser-focused on craftsmanship and precision, even in the most absurd of situations. In one especially impressive example, two bodies (seemingly-clamped to adjustable surfaces) embraced and were pulled apart by the viewer’s knob-twisting. Limbs flailed, but we could choose to block the dancer’s bodies or not, to allow them contact or forbid it.

In these latest works, Ellsworth created the perfect conditions for us to increase or release tension, keeping in mind that laughter itself is a form of release. But this show, and Ellsworth’s work as a whole, is mightily physical, driving home the point that actions taken in the digital realm, “cloud” notwithstanding, have real consequences in this one.