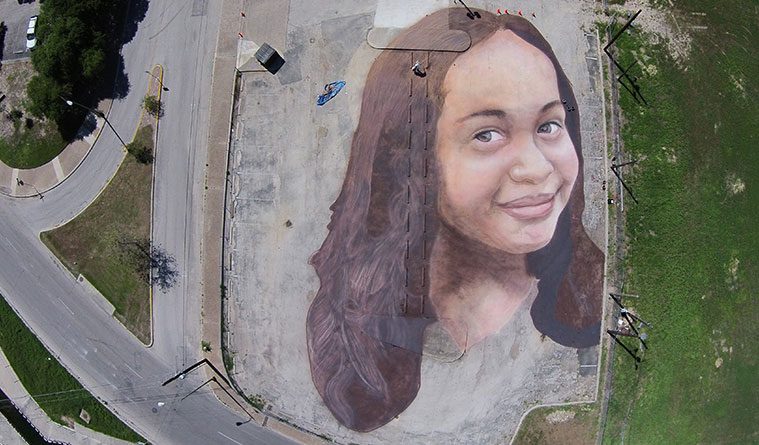 Nyssa- The Portrait to Represent Us All 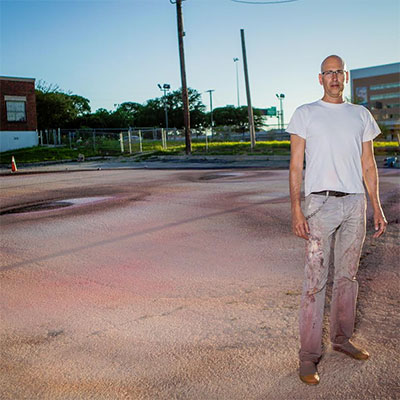 A chat with Jorge Rodríguez-Gerada

Huddled in the front seat of a loaded down pickup truck filled with miscellaneous art supplies, tools and papers, Jorge Rodríguez-Gerada and I sit, staring off into a parking lot to talk about the larger than life, “Terrestrial Series” portrait he completed in San Antonio for Contemporary Art Month (CAM). Painted directly onto the back parking lot of the Christopher Columbus Italian Society, located at 201 Piazza Italia, Rodríguez-Gerada explains the inspiration behind his massive horizontal portraits.

Rodríguez-Gerada was in San Antonio as a personal guest of former VIA and Museo Alameda Chairman, Owner of Muñoz and Company and political advocate, Mr. Henry Muñoz, and he explained how the San Antonio project came to be.

“I first met Henry at the Smithsonian Gallery on the National Mall where I was doing a portrait titled, ‘Out of Many, One’, which was composed on six acres of land next to the World War II Memorial,” he tells me.“Henry invited me down to San Antonio to do a similar work inspired by the people of San Antonio and their own unique diversity. Henry is so passionate about his city and its people, itwas a project I knew I wanted to be a part of.”

Jorge Rodríguez-Gerada’s signature portraits are often acres long and equally wide, visually seen in whole only by satellite imagery, drone photography or multi-storied building views. A sort of contemporary portraiture that pushes the limitations of traditional portraits, Rodríguez-Gerada wants his audience to experience his artwork on many levels; whether they walk into the artwork and become part of the experience, or see it from above thanks to aerial photography. He feels this is all part of the work, the physical presence of the piece in the surrounding environment, how people interact with it and how they perceive it through images.

Born in Santa Clara, Cuba, Rodríguez-Gerada and his parents fled the Castro regime and ended up in North Plainfield, New Jersey. At 19 he moved to Manhattan and positioned himself as a post-graffiti art commentator and social artist. Rodríguez-Gerada dropped out of Jersey State College to pursue a career in fine arts but never feared his lack of a degree would get in the way of success.

“If you shoot for the stars you will at least reach the moon,” he says.

Rodríguez-Gerada has experienced many hardships along the way, not the least of which being the severe neurological disorder which plagues his son.

“Dealing with his condition was a financial whirlwind,” he admits.  “Our son was on a cocktail of seizure medicines.”

Rodríguez-Gerada moved his family to Barcelona in pursuit of alternative treatments and took an almost six year hiatus from creating art. In 2006 he started work again, on some original ideas, pushing the envelope of his previous post-graffiti, ‘culture-jamming’ social artwork.

“I wanted to push the limits of contemporary portraits,” he says. “These kind of monumental images are a powerful way to talk about the moments…the moments in time. Every one of my art pieces is based on a place, and I go to these places to tell a story.”

The subject of San Antonio’s “terrestrial portrait” is a little girl named Nyssa Gomez, and through the portrait, Rodríguez-Gerada addresses the diverse history and population of the city.

He points to a newly poured concrete patch on the parking lot, left of the truck cab.

“That is where archeologists think the first San Antonio settlement was,” he said. “When you look back in history everything is interlaced, interlocked with interchanges of cultures,” he explains. “I want to celebrate who we are today… I want to pay homage to that.”

“I want you to take away that this portrait can be any little girl, anyone from San Antonio; enjoy her content gaze, it’s intent… you can feel she is from a nurtured family, her parents are engaged with her personal development. I am painting her portrait here at the beginning of San Antonio – the original settlement.”

Nyssa’s face will be visible from the highway interchanges to the left of the parking lot downtown and will face the new San Pedro Creek development project (a development of Muñoz and Company).

“This is the future of San Antonio, facing the past,” he explains. “There is so much growth in San Antonio, so much diversity and it keeps getting bigger with more and more innovation.”

“As an artist I have a duty to embrace cultures, there is a need to reflect, no one gets to choose where they are born… if we look deeply, deep down, we are all the same.”

Jorge Rodríguez-Gerada completed his San Antonio portrait in three days and wrapped up his sojourn in San Antonio with an artist discussion at the Alameda Theater, hosted by Muñoz and Company on Sunday, March 29.

For more information on Jorge Rodríguez-Gerada and his large-scale “terrestrial portraits,” click here.