Opening to Baroque Possibilities: Houston’s Bach Society for the Americas 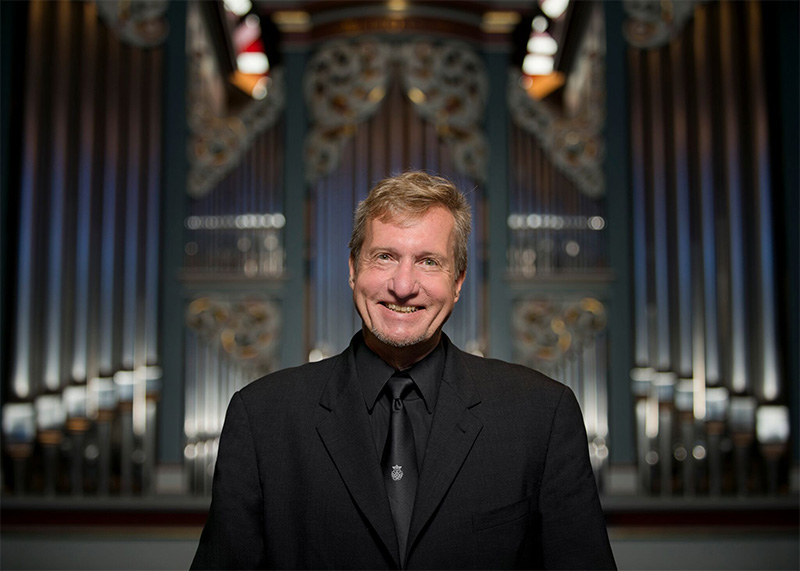 The Bach Society Houston will perform a smattering of its namesake’s most popular music this season. But look what else is in store: A few of Bach’s less-familiar choral pieces; a program spotlighting music composed by his uncles; a sampling of works by his New World contemporaries.

“Isn’t it nice that there’s still a whole bunch for us to discover?” asked Rick Erickson, the Bach Society’s director. He began exploring the byways of baroque music in his previous post–directing the Bach Vespers at New York City’s Church of the Holy Trinity. With weekly services eight months a year, Erickson needed reams of music. 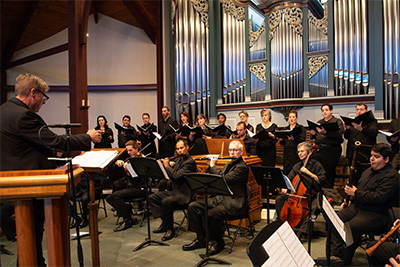 “Doing the vespers weekly for enough years, I felt like we weren’t opening up all the possibilities,” Erickson recalled. “So, whenever I was in Leipzig or Berlin, I would go into music shops and say, ‘Can you steer me toward the sacred music section? And can I just hang around and look?’”

Searches like those yielded a program dubbed “Bach and His Uncles,” a tribute to one slice of Bach’s multi-generational musical ancestry. The March 8 concert will put him alongside Johann Christoph Bach and Johann Michael Bach–the latter of whom also fathered Bach’s second wife, Maria Barbara.

“When you juxtapose (J.S. Bach) against the uncles, you say, ‘Oh!’ It’s very clear that the influence was very strong,” Erickson says. The concert will include Johann Michael’s “Lord, I Wait on Your Presence,” a double-chorus meditation that Erickson finds “achingly beautiful,” and J.S. Bach’s richly woven motet “Come, Jesus, Come.”

Near the end of Erickson’s stint in New York, he helped reveal another way to shed light on Bach. A leader of New York’s Syren Modern Dance “had become simply enamored of Art of the Fugue,” Erickson recalled, and she came to him wanting to choreograph Bach’s summation of contrapuntal art. After he bought in, they chose several movements offering “different types of energy and expression,” and the result premiered in 2013. 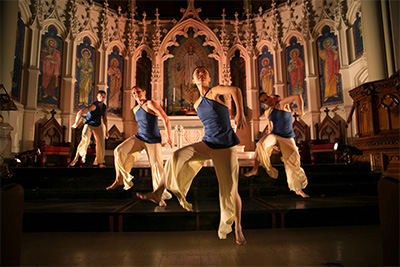 Syren reprises it with Erickson on Nov. 17 as part of the Houston Early Music Festival. Looking out across the sanctuary of the Christ the King Lutheran Church, the Bach Society’s home, Erickson said Syren’s dancers will encompass the entire room. “Even though there are just six of them, they really get around,” he said. While there may be “elements” of liturgical dance, he added, “it’s really a secular dance conception–I suppose ‘secular dance in a sacred space’ is a fair way to say it. … They’re very conscious of the use of the pulpit, the use of the furniture, the use of the space.”

Bach’s best-known choral works get a rest this season. Instead, Erickson and company will welcome Christmastime on Dec. 15 with the Cantata No. 36, Soar Joyfully Upward, which sidesteps trumpets-and-drums exuberance to offer a gentler, more graceful celebration. The Easter week concerts, April 5 and 10, will include the richly hued Cantata No. 131, From the Depths I Cry to You.

But the Bach Society will nevertheless take its audiences on a few trips through beloved territory. In a Feb. 8 program of Bach concertos, Erickson will move to the harpsichord in the Brandenburg Concerto No. 5–sharing the spotlight with violinist Oleg Sulyga and flutist Colin St. John.

Though this may be Erickson’s tenth time to perform it, he said, he began practicing in August, out of respect for the Brandenburg’s whirlwind keyboard part–which leads into an especially rousing first-movement cadenza.

“It’s really fun. There’s nothing like it,” Erickson said. “And when you get to the last moment before you jump into that ridiculously long cadenza, it’s great. It’s all worth it. But it’s quite an adventure to get there.”

Other Bach Society musicians will take their own turns at center stage. Organist Mary Joy Silmaro will anchor the annual New Year’s Day concert. For a new series featuring back-to-back concerts in Galveston and Houston, violist Matthew Carrington will perform works appropriated from other instruments–such as violin or cello–Jan. 18 and 19. Violinist Kurt Johnson will include Bach’s iconic Chaconne in a solo program May 3.

The June 7 season finale, a warmup for concerts next summer in Bach’s German stomping grounds, will highlight a new initiative for the group. “I’ve become more and more fascinated with what was happening in the Americas in Bach’s time,” Erickson says.

So the tour repertoire will range from spirituals and works from colonial New England to music by Manuel de Sumaya, music director of Mexico City’s cathedral–and one of the first native-born composers in such a prominent post. Sumaya’s Laudate Dominum, Erickson said, at first is deceptively conservative. “You’re humming along, and it all seems completely predictable. Then something gloriously bizarre–harmonically–happens.”

“We’re a Bach society in the Americas,” Erickson added. “So it’s part of our conversation.”