Out of the Shadows: HGO’s ‘Don Giovanni’ and ‘The Phoenix’ Explore the Mozart & da Ponte Partnership 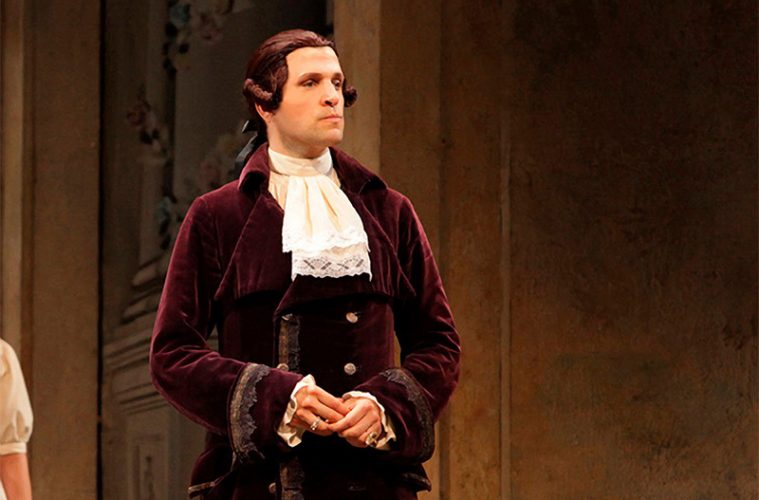 Houston Grand Opera premieres The Phoenix or The Operatic Adventures of Lorenzo Da Ponte on Two Continents in Two Acts by Tarik O’Regan and librettist John Caird, April 26-May 10. Pictured: Luca Pisaroni from HGO’s production of The Marriage of Figaro. Photo by Felix Sanchez.

He helped create an iconic group of operas, but to most of us, he exists as little more than a surname after a hyphen: Mozart-da Ponte. Yet without Lorenzo da Ponte’s librettos, we wouldn’t have Mozart’s The Marriage of Figaro, Don Giovanni or Così fan tutte.

As the successes and travails of Mozart’s life have expanded into legend, most everyone has ignored da Ponte’s story. And what a story: He grew up in Venice’s Jewish ghetto; converted to Catholicism shortly after his bar mitzvah; became a priest; and got banished from his hometown because of his womanizing. That was all by age 30–and he had more than 50 years to go. 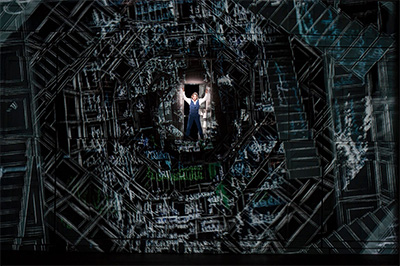 Da Ponte’s adventures and misadventures will emerge from history’s shadows April 26, when Houston Grand Opera premieres The Phoenix by composer Tarik O’Regan and librettist John Caird. The duo put da Ponte onstage to conjure up his own tumultuous saga, from his Venetian vicissitudes to his Viennese collaboration with Mozart to his ultimate refuge in the United States.

“He had the most extraordinary life,” Caird said last August, when HGO spent a week workshopping The Phoenix. “He had the most disastrous string of relationships. He got hounded out of different countries at different times. Even at the end, he was making the most egregious mistakes. And our conceit in our opera is that he has come to think of himself as a phoenix. His capacity to reinvent himself is one of the things that make him special.”

As the real-life da Ponte strove to make an impact on New York, he set out to build the city’s first opera house, Caird said, and he raised part of the money by putting on stage shows. Seizing on that episode, Caird and O’Regan blended fact and fantasy: They cast their creation as the dress rehearsal for one of those fundraisers–an opera that da Ponte has based on his own life. Thus, The Phoenix took shape as an opera-within-an-opera. 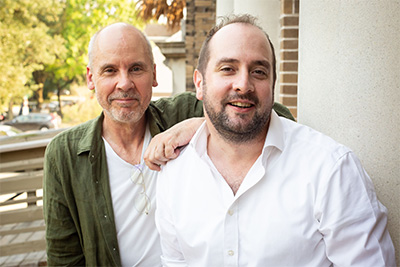 Though contemporary operas typically tell their stories through music that emerges in a continuous flow, O’Regan and Caird crafted The Phoenix as a series of separate musical numbers connected by sung dialogue. Mozart, da Ponte and many others used essentially that format well into the 1800s, but “the operatic art form has veered in a different direction,” O’Regan said recently. “When John and I wrote the opera, we wanted to revisit the art form in its heyday.”

“We were interested in the structure of the 18th-century, early 19th-century number opera,” O’Regan continued. “The thing that goes hand-in-hand with that is, we wanted to revisit the idea of comedy in opera.” Old-school sung dialogue, called recitative in opera parlance, lets the performers inflect the music spontaneously–helping comic moments come alive, O’Regan said. “I’m not dominating the pacing as the composer. … We’re handing it over to the singers to make it work.”

Though the recitatives were mostly unwritten as of last summer, the workshop showcased a few numbers. O’Regan and Caird gave da Ponte ebullient opening and closing arias addressing his New York audience, jovially telling them: “This is the story of my life. And most of it is true. Well, some of it is true. … Enough of it is true to make a good story.” The opera-within-an-opera included an eloquent aria for Emperor Joseph II, thanking Mozart and da Ponte for their work and meditating on his own weighty duties as a ruler during wartime. 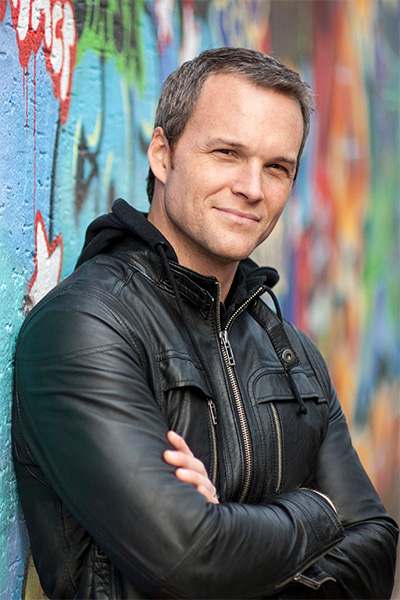 Ryan Mckinny sings the title role in HGO production of Mozart’s Don Giovanni, April 20-May 5. Photo courtesy of the artist.

The Phoenix at times shifts focus quickly, O’Regan said. Designer David Farley’s set evokes a 19th-century theater’s stage and offstage areas, so a scene from da Ponte’s life-story opera can play out at the center while characters in the wings observe and comment. The music has to help each of the opera’s ingredients come alive, O’Regan said, and his own view of da Ponte’s life helped guide him as he conceived the score.

“Lorenzo straddled not only different continents and different centuries, he straddled different eras,” O’Regan said during the workshop. The Italian wordsmith who collaborated with Mozart in 1780s Vienna found his way to early 1800s Manhattan, which just then was laying down the street grid that still exists. Da Ponte recorded what he saw around him. “There’s a letter where he goes away and comes back, and they’ve built Tenth Avenue through what was someone else’s garden. … That straddling of modernism and the old world, I find very powerful,” O’Regan said.

O’Regan’s score straddles eras, too. In the opera-within-an-opera, he said, the sung dialogue is accompanied simply by fortepiano, just as it would have been in da Ponte’s time. But in the framing scenes’ dialogue, a small string ensemble backs up the singers.

When characters in the wings of da Ponte’s theater comment on what they see in his opera, O’Regan added, the orchestra sets them apart through the glistening sounds of high strings, harps and vibraphones–the last, of course, a decidedly modern ingredient. And through the course of The Phoenix, the gradually richer orchestration and growing rhythmic drive–especially when da Ponte’s opera depicts his American years–should help give the audience “this feeling of being in a more modern world, while thinking of the older world. The music acquires a sort of depth–a Technicolor depth.” 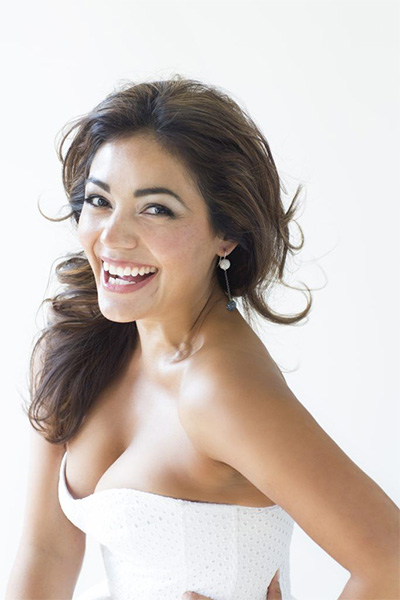 Ailyn Perez sings the role of Donna Anna in the HGO production of Don Giovanni. Photo courtesy of the artist.

O’Regan feels a personal resonance in the real-life da Ponte’s story: As a British native who has gained U.S. citizenship, he’s another example of a European seeking opportunities on this side of the Atlantic Ocean.

“It’s the talented, highly motivated immigrants in any community who strive harder than anyone else,” Caird said. “They know they’ve got it all to prove. And they’re often the ones who redefine everything.”

HGO will juxtapose The Phoenix with one of the great Mozart-da Ponte creations, Don Giovanni. Danish stage director Kasper Holten, whose production debuted at London’s Covent Garden in 2011, drops the opera’s final sextet, closing as the legendary womanizer confronts his doom–as many 19th-century stagings did.

Apart from the performances, other events will expand on the two operas’ subjects and issues. Spanish director Carlos Saura takes viewers back to the genesis of Don Giovanni in his 2009 film I, Don Giovanni. At the Museum of Fine Arts, Houston, combination gallery tours and recitals will focus on the three women Don Giovanni pursues in the opera. And a panel discussion titled “Don Giovanni and the #MeToo Movement” will feature director Holten, HGO artistic director Patrick Summers and River Oaks Chamber Orchestra founder Alecia Lawyer.

Though O’Regan isn’t on the panel’s roster, he thinks it’s “absolutely right” to explore Don Giovanni’s meaning to today’s society. “This work, which has been fixed on the page over 200 years, can reignite passions and reignite argument,” O’Regan said. “It’s what makes the art form so fascinating.”