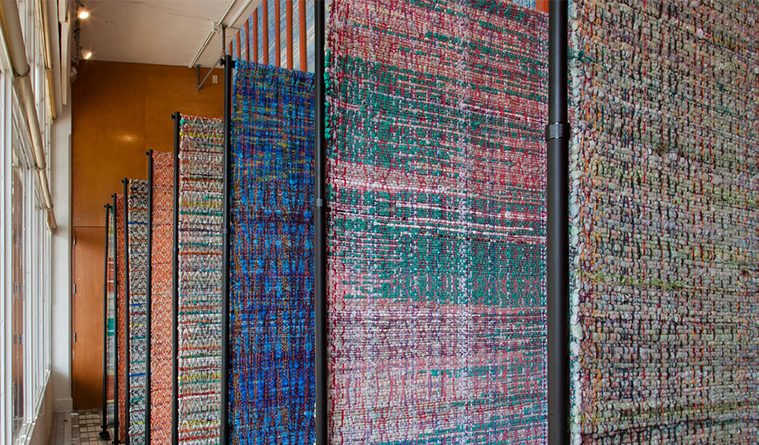 Over the Borderline: Exhibitions at Artpace Address Contemporary Divisions 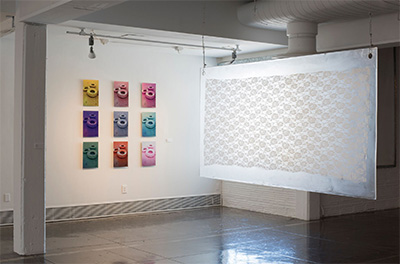 It could be argued that art is limitless. But is it borderless? This summer, Artpace embraces this question with two solo exhibitions of work by Sabine Senft and Doerte Weber, artists who are addressing global issues of migration and geopolitical borders.

Installed in the Hudson Showroom is Senft’s Borderline Reality, an exhibition of new, colorful 2- and 3-D works produced with a grant from the Artists Foundation of San Antonio. In the Main Space is Checkpoint, an installation of large-scale weavings by Weber, also from Germany. Both shows are on view through Aug. 27.

Senft grew up at the Czech/German border during the Cold War, with the Iron Curtain firmly in place. Her first job was on the Austrian/German border, and she now lives near the Texas-Mexico line. Her lifelong proximity to such divisions informs much of Borderline Reality which she uses as an opportunity to express the “contemporary urgency” of related tensions and negotiations.

For Borderline Reality, Senft created a stone portal by which gallery visitors can navigate a blue and green candy replica of the Rio Grande (visitors are encouraged to take a piece of candy). This totem-like entrance is made of tenuously stacked rocks that taper in size, acting as a gateway to the candy river and framing a video projection on the wall that shows the actual river’s continuation.

“The rocks were collected at the U.S./Mexican border and serve as sentinels forming a portal for visitors to walk through, reminding them that these rocks are the memory of the earth and have seen the comings and goings at the border for millions of years,” says Senft. For her, the candy river references the sweeter things in life and forms an ideological picture as well as a physical border; it encourages eating away at the border, literally and figuratively.

“Before being able to walk through this stone checkpoint,” she says, referencing the installation, “the viewer has to circumnavigate a translucent screen suspended from the ceiling with barbed wire. It has a piece of net curtain encapsulated that is symbolic for the Iron Curtain era.” 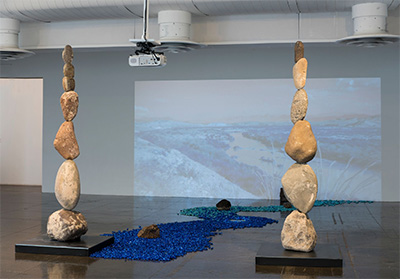 Her wall works include a set of nine candy-colored, high-chroma prints on aluminum that depict a large tire lying in the dirt. Senft contextualizes the images, explaining that border patrol officials use a metal chain to drag the tires to smooth out the dirt so that any footprints are immediately apparent, intended to record illegal movement at the border. Also included in the installation is a work on paper series called Surges which the artist created with 24K gold leaf and discarded objects from illegal crossings of the Rio Grande into the U.S.

Senft is, by trade, a stone sculptor, whereas Weber is a self-taught, self-identified “structural” weaver. Weber was participating in the Horlock House artist residency program in Navasota, TX, just south of College Station, while also working on her installation Checkpoint at Artpace. The large, colorful hand-woven panels in steel frames reference the U.S/Mexico border fence.

Checkpoint originated as Checkpoint Carlos, a temporary art installation, made possible by The Artist Foundation of San Antonio, against the border fence in the Rio Grande Valley. For the Artpace iteration of the project, Doerte created a gallery installation that incorporates those panels along with seven, new, large-scale woven sections that run floor to ceiling, and (almost) wall to wall.

Doerte believes her twill tapestries resonate with viewers because of her choice of material and method of collecting it. She uses cotton thread but also incorporates something unexpected—the plastic bag sheaths in which newspapers are delivered. Each panel contains over 1,000 bags, and their colors play a major role in the pattern. “The colors take on meaning, so I’m careful about which ones I use,” she says. For example, the blue New York Times delivery bag easily references sky and the opaque brown of the San Antonio Express translates into land. With some of the text on the bags still visible throughout the weave, viewers can draw on their personal connections to local and global information and communication.

People who live nearby and who have heard about the project—often people whom she does not know and never meets—donate the bags to her, usually leaving a collection on her doorstep. “I don’t personally know everyone who has donated and they may or may not ever see the final artworks or the installation,” says Weber, “but that’s okay. Because of their participation, we are all connected as a community.”

Weber and Senft each hope their artworks highlight the human relationships that exist amidst geographical delineations, especially concerning the U.S./Mexico border. These artists remind us that what affects one of us actually affects us all. Together, Borderline Reality and Checkpoint asks those of us on this side of history to consider our actions, and to look for connections where we might assume only division exists.