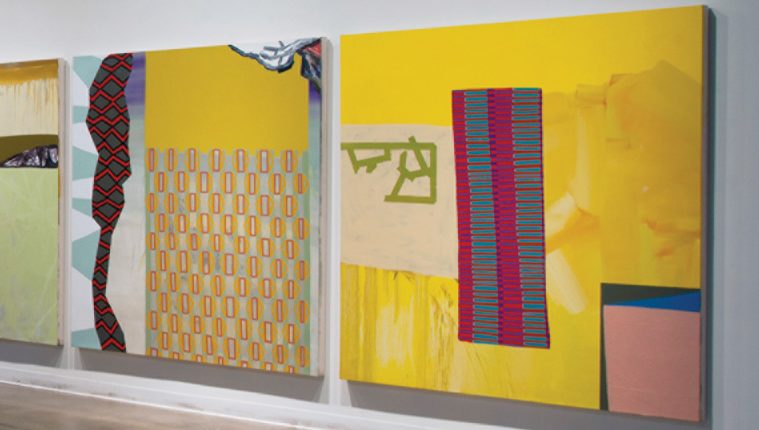 The works of Dallas artist Ludwig Schwarz at Conduit Gallery in Dallas.

Dallas painter and post-medium practitioner Ludwig Schwarz loves a good glitch every now and then. “I am so glad you’re not recording me, illness ” he said in response to the failures of the voice memos option on my iPhone. In self-deprecating fashion, shop he said, “I really don’t have anything too smart to say,” which is absolutely not the case. More than a matter of privacy or self-deprecation, fewer words said does not so much enhance the work but at least remove any potential hindrances. “I don’t want to burden the work with language,” he further explained.

Schwarz also loves a good joke. As with almost any of his artistic endeavors, there is a strong undertone, if not undertow, of irony. It’s all about “low comedy,” to use Schwarz’s phrase. “I have always been interested in the spectacle and the theater of art. I am making fun of myself as an artist.” The brilliance and singularity of Schwarz’s practice as an artist coalesces in his will to combine humor and raw material in order to yield what might be considered for some a conceptual formalism, to collide seeming opposites, and for others, simply put, a clever sense of the object. It is this intelligence and cunning that permeates the room where sit the object — video, assemblages, and paintings — of Taos (Taos Thrift Shop), Schwarz’s current Fluxus-inflected clash of found-object and painted form at Conduit Gallery.

A filigree of coat hanger wire hangs overhead at the front of the gallery. It is a sign that says “Welcome to Taos.” While in many ways the overall room bears a fake narrative about the landscape, Taos, and an ersatz thrift shop, the sign as a thing embodies the kind of conceptualist self-reflexivity — the idea that it is art conscious of itself as art — which is, once again, at the core of Schwarz’s work. Hung at Schwarz’s eye level and in conjunction with his height, it is for Schwarz a “sign within the thrift shop as opposed to a sign for the thrift shop.” To the left sits “Untitled Documentary,” a small monitor embedded in a stack of cardboard sitting on the floor and leaning against the wall. It runs a short loop of the desert landscape that cuts to a close-up of a large plate of oozing food.

Ludwig Schwarz has recently been exhibited at Conduit Gallery, Dallas, and his work can also be seen at the upcoming Dallas Art Fair, April 13–15 in the Conduit exhibiting space. Information on the 2012 Dallas Art Fair at www.dallasartfair.com.

There are three assemblages in the center of the room that, on their own, feel something like a taxonomy of attic memorabilia. The things stacked up in “I Voted” might be the junk of your grandparents or from a yard sale. There, valuable meets valueless, as atop of a stack of expensive Bose speakers sits a pair of semi-used brown dress shoes, fake Birkenstocks, and white boxing gloves with the American flag printed on them. Music composed by Schwarz on his computer while in Taos during the summer of 2010 emanates from the speakers. Three speaker stands create a

line of adjacent objects on the floor. With the four large paintings hanging on the neighboring wall, the assemblages become performative bric-a-brac, actively bringing out the bric-a-brac formalism of the paintings. Each is a carefully worked out pastiche of colored and formal codes, some rendered from free-hand gestures others through tape. They are uniformly large, at 6’ x 6’, ruminative and abstract, but not in the way mid-20th-century painting was. Beyond the foundational influences that Abstract Expressionism might have on any talented painter, Schwarz hews closely to an impure practice of the art, that is to say, painting that is about itself and other objects in the room. “My paintings are always installed with objects,” he said. Placing painting amid object creates a network of relationality that breaks down a certain presumption and literalism of painting-as-art. Schwarz explains by referencing the conceptual artist Joseph Kosuth: “Kosuth used to say his mother knew something was a work of art because it was a painting.” In the spirit of Kosuth, Schwarz challenges painting as a ready-made signifier of art. Painting does not simply equal art for Schwarz, but also patterned surface, painted module, bearer of bric-a-brac, and most importantly, a semiological system of “art,” and its attendant signifiers “class,” “taste,” “gallery system,” and “beauty.” Schwarz said, “I have always played with painting as a prop for art.”