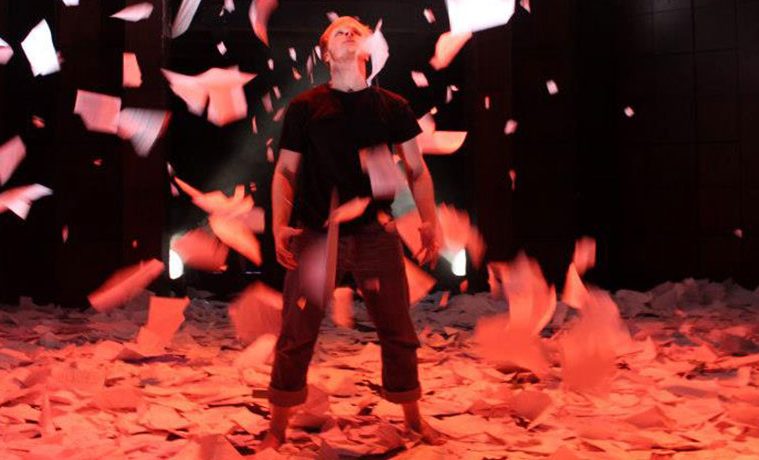 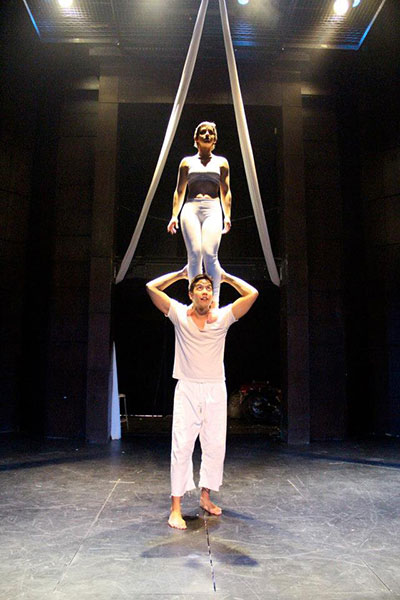 Thousands of sheets of paper wafting through the air while a young girl dances on aerial silk and actors perform magic, acrobatics and more, all without uttering a word. This is Prism Co.’s Galatea.

Katy Tye, Jeff Colangelo and the group of artists currently performing as Prism Co. will produce Galatea, April 10 – 27 in a west Dallas warehouse appropriately referred to locally as “the Big Green Warehouse.”

Tye and Colangelo, the duo behind one of Dallas’ newest theater companies, are creating a different kind of theater.

“We start with a material, something we think would be fun to work with,” says Colangelo, “And we build a show based on what we think we can do with it.”

Another way to put it? Colangelo and Tye work on shows that are fun.

Colangelo and Tye met while both were students at Southern Methodist University (SMU).  Their mutual interest in creating a new brand of movement theater prompted the creation of several shows together while at school.

The idea for their first show actually emerged from another show they saw while students. Colangelo became fascinated by the use of paint in that performance, but, says Tye, felt the performers didn’t use the medium to its full potential. Tye and Colangelo’s paint-filled performance that followed left audience members splashed in colorful paint. Shows since have featured materials such as children’s playthings, elastics and carabiners.

It’s an interesting concept, a medium as impetus for performance, and although it may not sound like a strong artistic credo on which to base a theater company, Colangelo and Tye’s creations have elicited a rather strong response from their audiences.

“I had someone tell me after a show they didn’t know they could still feel the emotions they felt during our performance,” said Tye, high praise for any artist, especially an artist still in college. 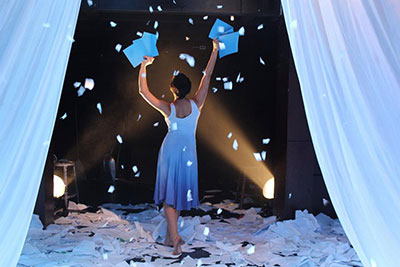 Galatea is based on the Greek myth of Pygmalion which tells the story of an artist who falls in love with a sculpture of a woman he has created. He prays to Aphrodite to bring the sculpture, which he has named Galatea, to life. Aphrodite grants his wish and, at least in the myth, the two live happily ever after, or something along those lines.

In Colangelo and Tye’s Galatea, the myth is given a contemporary spin and the story of a nameless artist who works to create the perfect woman is told wordlessly through a unique blend of dance, aerial silks, weight-sharing and, perhaps most importantly, paper, the medium Colangelo landed on to determine the course of this show.

Most of the set (which is designed to put you inside the artist’s studio as it were) is constructed of the recycled paper Tye and Colangelo have been collecting for months, and many of the ways the paper will be utilized in the show emerged from collaborative play sessions the two and their team had in an attempt to learn the extent of the material’s capabilities.

This performance differs from some of Tye and Colangelo’s earlier movement theater pieces. Apart from the fact that the two have quite a bit more freedom and creative control now than they did when performing at SMU, Galatea marks the first time the two have staged a show with a true narrative, albeit a rather nebulous one.

Instead their shows are typically characterized by the lack of story, the two preferring instead to let the audience overlay their own ambitions and visions on a neutral mask of a show filled with more individually emotive artistic expression, music and dance being examples. But while Galatea features what amounts to a skeleton of a story, the lack of dialogue and heavy use of symbolic imagery should still feel ambiguous enough to allow for its subjective interpretation.

Maybe that’s what elicits the emotional response Tye and Colangelo have been receiving. A blank slate, at least as far as story is concerned, gives viewers the freedom to experience a show on an intimate, personal level, something heavy dialogue renders more challenging. 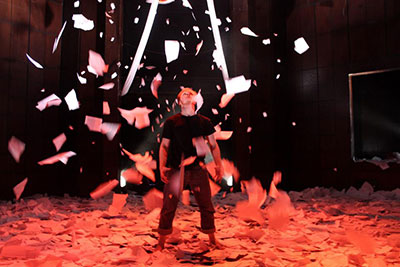 The choreography of Tye and Colangelo for Galatea will be given an auditory backdrop by fellow SMU student and musician Fabricio. Fabricio has created a soundtrack of sorts for the show which he will perform during each performance. The eclectic sounds will include, amongst other things, the use of string instruments and beautifully looped vocal arrangements.

Adding to the magic produced by Colangelo and Tye’s choreography and paper effects will be magic of another kind provided by local magician and yes, also former SMU student, Trigg Watson. Watson, who was not a part of the group’s initial staging of Galatea at SMU, will be incorporating his own, unique magic tricks into the telling of the story.

When asked for a clue as to what prompted the use of paper, Tye and Colangelo cite its ubiquity, cheapness and of course, the fun they have working with it. But maybe more than that, paper is the perfect medium with which to tell the story of an artist and illustrate their original performance which explores the emotions involved in the artistic process.