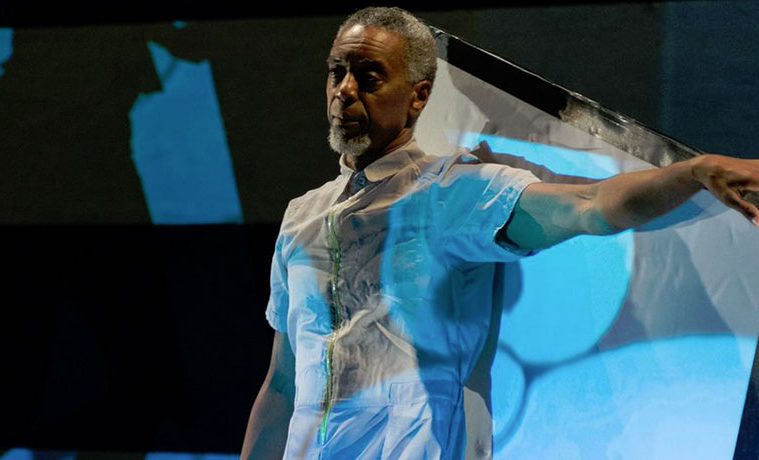 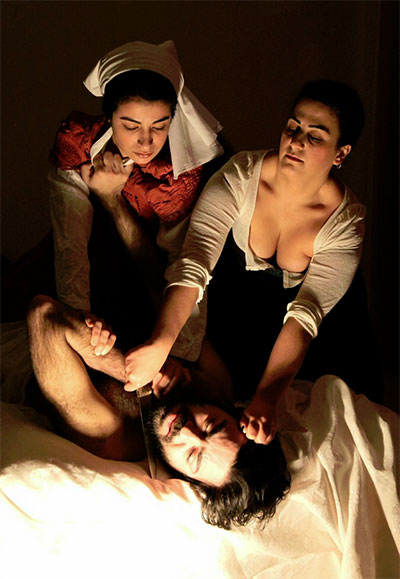 The University of Houston Cynthia Woods Mitchell Center for the Arts presents the second iteration of CounterCurrent, April 14 – 19, headquartered at FlexSpace. This free—yes, totally free—six-day, unprecedented art festival is comprised of audio and visual installations plus live performances and events by international and local artists, including new works by UH faculty and students, at unexpected sites throughout Houston. With a mix of organizational partnerships and collaborations, CounterCurrent is truly part of the art festival avant-garde, creating opportunities for audiences to have direct experiences with the city, facilitated by some of today’s most intriguing artists.

For readers already familiar with the Mitchell Center and the creative risks it takes, other programs might come to mind: For example, Dario Robleto’s recent project, The Boundary of Life is Quietly Crossed, which poetically explores the history of the human heartbeat as both sound and image, or Daniel Bernard Roumain’s En Masse, a “deconstructed parade” with the UH Spirit of Houston Marching Band. Again, these were free events, with contemplation and participation the only price of admission.

As the name implies, CounterCurrent stands in contrast to expectations—even trendy ones—about what an art festival can be and do. In conceptualizing CounterCurrent, as well as other Mitchell Center programs, Mitchell Center director Karen Farber focuses on artists working with topics, themes, and formats that resonate in and with Houston, rather than asking artists to create work about the city. This subtle, intentional shift away from reference and toward relevancy is a characteristic unique to the Mitchell Center’s programs and commissions, and it allows for both local and international artists to grab hold of audiences in ways that cannot easily be shaken or forgotten. This is exactly how the Mitchell Center shines: reflecting the narratives of the city back on itself in valuable ways. 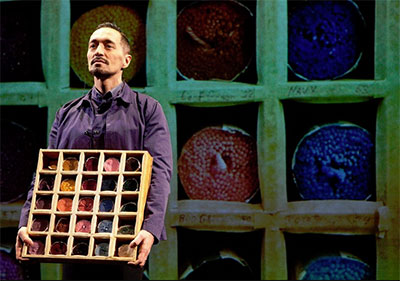 “The question of how and where art is powered by relevancy is one we are always asking, especially when faced with the challenge of not watering down difficult or complex subject matters,” says Farber. “We are dedicated to working with artists of high merit who are able to illuminate what we see in everyday life in new ways.”

As Farber and her staff curated the festival, connections among the projects revealed themselves in ways that were not immediately noticeable—most powerfully in the fragmentation of history and narrative.

For example, Bodycast, an artist lecture from Suzanne Bocanegra, looks at the life of the artist and how it manifests in public, the multi-layered process of art-making, and shifting ideals of feminine beauty. The talk will be performed onstage at the Museum of Fine Arts, Houston, by the actress Lili Taylor, as Bocanegra feeds lines to her from just behind the wings. Though Taylor tries to recite the lines verbatim, her struggle is visible, mirroring what the artist endures in an artist’s talk. Bodycast is a sequel to Bocanegra’s When a Priest Marries a Witch, which the Mitchell Center presented in 2011.

If Ever I Would Leave You, presented in collaboration with the University of Houston Blaffer Art Museum and independent curator Janet Phelps, is a performance by Brooklyn-based multimedia artist Janet Biggs that looks at loss, desire, chaos and control through a fading sense of self induced by Alzheimer’s Disease. The piece combines live actors, musicians, and vocalists in a dance of rituals, using video projection to show the “futile struggle to maintain control amongst the fraying fabric of a mind,” and ends with one vocalist singing the title song, a favorite of Biggs’ grandfather. Lyrics fade until only silence remains. Powerful stuff. 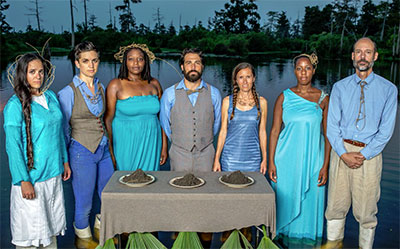 Cry You One, a collaboration between Mondo Bizarro and ArtSpot Productions. Photo by Melisa Cordona.

Similarly layered is johnbrown, by multidisciplinary artist Dean Moss, who draws on his personal history of grass-roots activism to combine live choreography and text with video performances, accompanied by an original script from Thomas Bradshaw and a musical score by Stephen Vitiello. The seven segments of the performance are titled after individual articles of abolitionist John Brown’s Provisional Constitution of 1858.

The festival includes two moving (literally) performances: Cry You One, a collaboration between Mondo Bizarro and ArtSpot Productions—two New Orleans theater companies—is described as a three-hour outdoor “processional performance” that uses music and theater to tell the story of Hurricane Katrina and its relevance to other communities, such as Houston. For Zoukak Theater Company’s In Walking Distance, a participatory promenade weaves its way through the UH campus, filling the shoes and following the steps of historical and mythological female warriors involved in different forms of resistance. 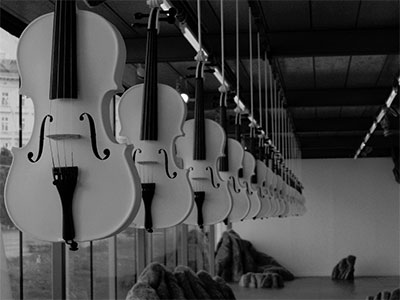 Islamic Violins (ed.II), by Ibrahim Quraishi, is an installation that pairs the dramatic image of numerous violins suspended from the ceiling with raw, lo-fi sound. These perfectly symmetrical figure-like instruments embody the squawking of the media, which interferes with the contemplation of beauty. Both Islamic Violins and In Walking Distance are presented as part of the Mitchell Center’s INTERSECTIONS, a new Mitchell Center initiative focused on Houston’s complex and diverse Muslim population, with an emphasis on the University of Houston’s own student body.

“When people picture what political art is, it’s usually in the form of agitprop or aggressive work. That is not the kind of artist we seek out or end up working with. However, in the current climate, programming an artist whose work deals

with Muslim identity can be seen as an inherently political act,” says Farber. “Houston is an extremely diverse place in terms of demographics but also in perspectives. Our programming at the Mitchell Center always comes back to what we think will resonate in Houston, and get people talking – not alienate people who don’t agree with the artists or curators.”

And part of festival is indeed focused on dialogue. In addition to other performances and events not mentioned here, festival-goers can attend Current Conversations. These talks with artists, activists, and community leaders focus on a range of topics from festival content to art as activism. 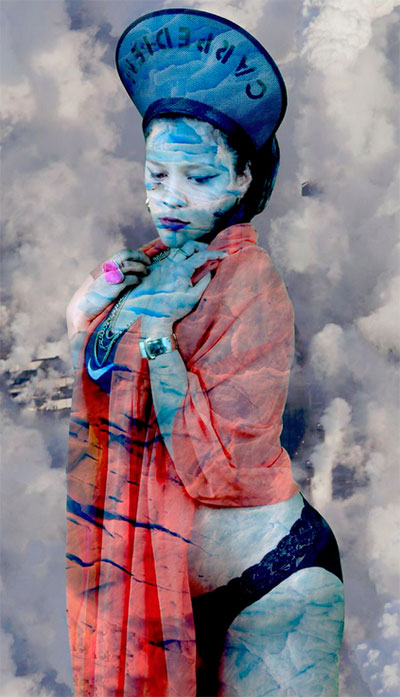 Sofia Cordova performs Echoes of A Tumbling Throne (Odas Al Fin De Los Tiempos) Test #4 on April 15 at 7pm as part of I perceive the other and lose myself, with Autumn Knight, on view at She Works Flexible, April 15-19. Photo courtesy of the artist.

Countercurrent concludes with Ten Tiny Dances®, an informal, high-energy event of five-minute, back-to-back dances on a 4×4 foot stage. Never has dance been so—well, fun. Audience members quickly begin cheering for their favorite dancers, as they are witnessing artists truly experimenting with perceived limitations of form, space, and time. The fun continues each night of the festival with Cocktails & Concoctions, prepared exclusively for festival patrons at a host of local restaurants.

Last year, the festival shared billing with Fusebox, Austin’s well-known festival. But for 2015, even though the two festivals had a shared interest in working with at least one of the same artists, all involved decided to build on the differences between the two cities and work independently. A win-win situation. “It’s nice to be able to tell artists from outside Texas or outside of the States that there are not just one but two great festivals happening here,” says Pia Agrawal, Mitchell Center program director and former programming director of the Live Arts Festival (now FringeArts) in Philadelphia.

This year, the public’s experience of CounterCurrent will be more streamlined, thanks in large part to Agrawal’s past experience. “My work in Philly let me get the festival part down – the logistics, the audience management, pulling out themes and ideas through varied works – all that comes naturally to me now,” she says. “And focusing on the CounterCurrent audience in 2014 let me understand how to plan for each event and effectively communicate with audiences for 2015.”

Agrawal also says that the size of CounterCurrent lends itself to focusing more on each work, and making the festival satisfying for both artists and audiences. She recognizes genuine beauty in getting to work closely with the artists and, as a newer festival, she explains that they are able to set new rules for how they want to make this work (which includes an RSVP process and a strict no-show policy). This means finding a structure that works well for the organization, its partners, artists, and audiences. Agrawal, Farber and the rest of the Mitchell Center team are continually seeking a balance between artistic freedom, curatorial rigor and audience engagement.

“There are several key elements of our current artistic programming, and it’s a structure that we love,” Farber explains. “There is our Mitchell Artist Lecture each fall, which features an established artist with a legacy of interdisciplinary work. Then there are our year-round residencies, which enable artists to create new works in Houston. And finally there is CounterCurrent each spring, which contains those new works we have commissioned or helped to develop, plus existing works that Houston audiences otherwise would not see. There are also our university-based initiatives such as our curriculum, which continues to chart the path toward the creation of new artistic forms.”

But we all know that nothing is truly free, so isn’t there a hidden cost for the communities of Houston and visitors to gain access to all of the bold, experimental art and programming that the Mitchell Center has to offer? Of course there is. A simple yet continuous charge: pay attention.