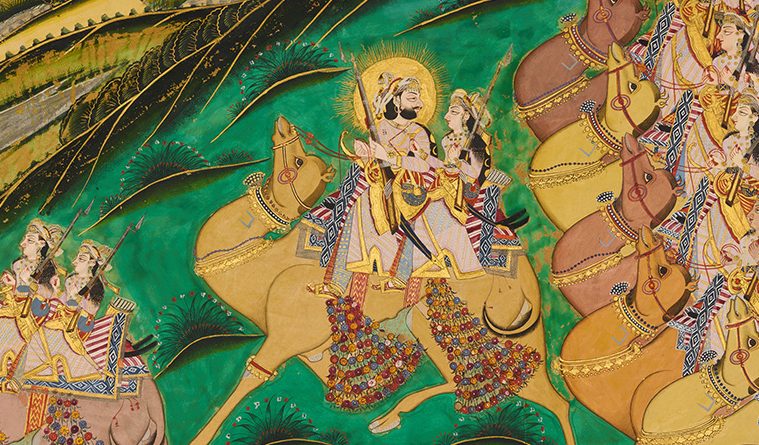 Peacock in the Desert: The Royal Arts of Jodhpur, India at Museum of Fine Arts, Houston

Peacocks are beautiful, magnificent even, but they have a grating squawk. In considering the exhibition Peacock in the Desert: The Royal Arts of Jodhpur, India, on view through Aug. 19 at the Museum of Fine Arts, Houston, a monumental effort and a magnificent display, first I’ll focus on the beauty; then I’ll spend a little time with the squawk.

Described by MFAH Director, Gary Tintrow, as the first exhibition of Indian art in the West—certainly the first on this scale—to be fully realized through Indian eyes and sensibilities, Peacock brings to Houston 250 splendid objects of Indian courtly life, most from the royal collections of Maharaja GajSingh II and Maharani Hemlata Rajye, joined by equally splendid loans from the Islamic art collection of His and Her Excellencies Sheikh Nasser Sabah al-Ahmad al-Sabah and Sheikha Hussa al-Salem al-Sabah, the collection of Her Majesty Queen Elizabeth II, MFAH’s own collection and private collectors.

That’s a lot of royalty in a single exhibition. And it shows. There are gilded and silvered elephant seats; glittering diamonds and rubies and emeralds; fearsome, delicately decorated guns and swords and daggers; and exquisite fabrics and rugs, all installed in the elegant, sophisticated way one expects at MFAH.

There’s a mat woven from elephant ivory and silver, encased in a gilded pavilion; a royal tent from 1700, a Lal Dera, the earliest one known to survive intact, lacking only the Maharaja himself to be complete; a silver Krishna sitting in a silver shrine; a custom-made 1927 Rolls-Royce Phantom of polished aluminum; and an airplane. Magnificence takes on new meaning.

But for all that splendor—and I think you must be getting the idea by now that there’s a lot—to my eyes it’s the paintings that are the jewels in this crown. There are scores of them, several lent by QEII, and each one warrants an exhibition visit all its own. At the exhibition preview I attended, we got a quick primer on looking at Indian paintings: first look at the whole; then immerse your eyes in the details. That’s where the transcendence comes, hence the magnifying glasses available throughout the galleries.

Unlike Western paintings, which were mostly created to be hung on walls, Indian paintings, often smaller and painted on paper, were meant to be stored away until a discriminating connoisseur took one from its portfolio to study closely for a leisurely hour in artistic paradise. We may not be able to lay claim to quite that level of refined connoisseurship, but we can pretend for a little while with such previously unimaginable (for me, at least) works as Sheikh Taju’s Maharao Umed Singh of Kota on a Hunt (1780), a relatively small 20×26 inch miracle in opaque watercolor and gold on paper.

I was tempted to make it alone my entire review of Peacock. Because of the ferocious tigers in the jungle, coupled with my purely Western sensibility, my first thought on seeing it was “Henri Rousseau.” But as a Facebook friend said (with a smiley face, but, sorry Henri, true), “like if HR was a great painter.” This Indian artist undoubtedly actually saw tigers, and all the other half-hidden elements there to be discovered—from hunters to boars to deer—in the real jungle, not just in the Paris zoo.

After all I’ve said so far, it may seem a contradiction for me to note that my major disappointment in the show is a feeling of sparseness. I’ve never been to India and so it may be a function of fallacious preconception that I approach shows about India (even shows of courtly Indian art) expecting, hoping for, galleries teeming with color, sound and people. True, space may be the ultimate luxury, especially in a crowded country like India, and this is a show about royalty; but the galleries in which it is installed are so vast that they can absorb all the objects, cars and planes included, with space to spare. I don’t often want to jostle for space in art museums, but in this show I think I’d like to.

Only in the gallery devoted to the world of women (Zenana) did I find anything approaching my fantasy, with a gorgeous display of royal gifts, and sensuous music (too soft, unfortunately) accompanying a video of dancing girls swirling in diaphanous saris. What with Pipilotti Rist and Kusama at MFAH in recent years, we’ve been conditioned to delight in immersive art environments. I’ve sometimes found them underwhelming, but I long for that with Peacock.

So that’s the beauty; now for the squawk. It strikes me that Peacock in the Desert is the latest in a string of exhibitions over recent years (think Hapsburg; think Houghton Hall) which are somewhat disturbing paeans to “The Great Family” view of art and history. They start with a genealogy, largely based on myth in the more distant branches, and end with a pallid gallery devoted to the petering out of power in the 20th century. In between are grand, expensive objects (we’ll call them art since they’re in art museums) whose real original purpose was to underpin repressive political structures through force and awe.

Such exhibitions go right along with our fascination for Downton Abbey, Victoria, and The Queen, all showing us the grand, benevolent attributes of folks with hearts of gold, just like us, except not really. As Fitzgerald noted (I paraphrase), the royals are different from you and me, and despite our daydreams most of us wouldn’t have been part of the upstairs crowd.

It’s almost as though we never fought a revolution to be shut of folks like that. As often presented, it seems to me such melodramas and exhibitions paint a one-sided picture of great-family, refined benevolence (downplaying or overlooking privilege, repression, unfairness) that is not true to history and that can be hazardous if lapped up uncritically in the present day. Every television show and exhibition has a message and the messages add up, so too much of that Great Family stuff, even in art museums, is a risky thing. Perhaps I’m being alarmist, but I’m old and uneasy about the way the wider world seems to be headed these days, sometimes even in art museums.