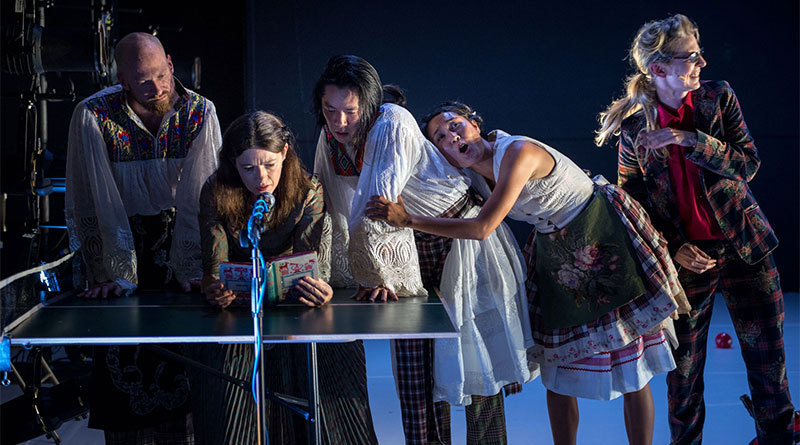 I got it bad, festival fever.  And I am not alone; Texas is right there with me.  One of the most memorable events at Austin’s recent Fusebox Festival was a waffle chat on festivals, of all things.   Festival chiefs from all over North America gathered (and yes, waffles were served) to discuss what actually happens at these events. People talked about the collapse of space and time, forgetting to eat, basically a lot happening in a short period of time. It’s intense. We get taken away from our usual schedules. I felt that big time, traveling directly from Fusebox to CounterCurrent, the three-year old festival put on by University of Houston Cynthia Woods Mitchell Center for the Arts. During CounterCurrent, I felt like a stranger in my own city, with outings like Remote Houston’s eerie tour of the east side and downtown and Big Dance Theater’s equally enchanting docent tour at the Menil Collection, This Space Left Intentionally Blank. This is a good thing, and something festivals do well. But I’ll go with the collision of people as the big perk. To see Big Dance: Short Form, hangout with Big Dance Theater’s Annie-B Parson and Paul Lazar at the Fusebox Hub, then see them again at CounterCurrent in a completely different experience: that’s some classy festival-ing.

Dance in Texas is festival-ing up a storm, with new ones cropping up each year, and they are making a huge impact in the way Texas dances with each other. Austin Dance Festival, organized by Kathy Dunn Hamrick, has been a game-changer for the community. “The festival was founded to strengthen the role of modern dance as an art form. Austin Dance Festival gives as many artists as possible an opportunity to introduce their work to new audiences,” says Hamrick, artistic director of Kathy Dunn Hamrick Dance Company. “I’ve watched it become a catalyst for new work and a cultural destination event for attendees.”

And we can’t forget about the fine work happening at Texas’ long running tap festivals: Tapestry’s Soul to Sole, June 7-12 in Austin, and Third Coast Rhythm Project’s Summer Tap Fest, July 27-31 in San Antonio. For international dance, nothing puts Houston on the world dance map like Nancy Henderek’s Dance Salad Festival, April 13-15, 2017. Although it’s not in Texas, I can’t resist a little shout out to Jacob’s Pillow Dance Festival, where I will be a scholar in residence during August. Some Texas travels to the Pillow this summer when Joshua Peugh’s Dark Circles Contemporary Dance performs for the second time on the historic Inside/Out stage on July 28.

There are so many dance festivals in Texas I can’t keep track of them, but I don’t need to thanks to L. Brooke Schlecte of Out of a Limb Dance Company, who started Texas Dance Festival Alliance, which allows for one stop festival shopping. Schlecte and her troupe also host the {254}Dance-Fest, Oct. 1-2 in Waco. Yep, that’s right, Waco! Now going into its fifth year, I’m amazed at how diverse a sampling of Texas dance comes through the {254}Dance-Fest.

This month, Dance Source Houston’s Barnstorm Dance Fest, June 16-25, has a bittersweet edge, as it will be the last festival held in The Barn, which during its Barnevelder days hosted the Big Range Dance Festival. DSH departs from this historic home for Houston dance in July.

The savvy folks at Contemporary Dance/Fort Worth are in their 13th year of producing Modern Dance Festival at The Modern. Based at The Modern Art Museum of Fort Worth, the festival runs over two weekends, July 23-31, with four days of programming, which includes the legendary choreographer, performer and writer Gus Solomons, Jr., who will perform I Used To Be Taller. Contemporary Dance/Fort Worth company will perform Solomon’s Steps #13: Thirteens. Related films will also be screened as part of the festival.

The Dance Council of North Texas’ Dallas DanceFest, Sept. 2-4, came out of retirement with bang three years ago, and is making all kinds of connections between companies and dancers. “DDF is a gateway to form new connections, relationships, and opportunities for audiences and artists alike,” says Gayle Halperin, DDF producer. “As viewers, we are introduced to new companies and styles, and gain deeper insight into the rich world of dance in our state and across our borders. The big we becomes a closer family.”

Halperin is right, and we have the evidence on stage this month when Houston’s METdance premieres Peugh’s delightful The Clean-Cut American Stage Show, June 3 at Miller Outdoor Theatre. METdance artistic director Marlana Doyle met the Dallas-based Peugh at Dallas DanceFest, and the rest, as they say, is dance festival history.