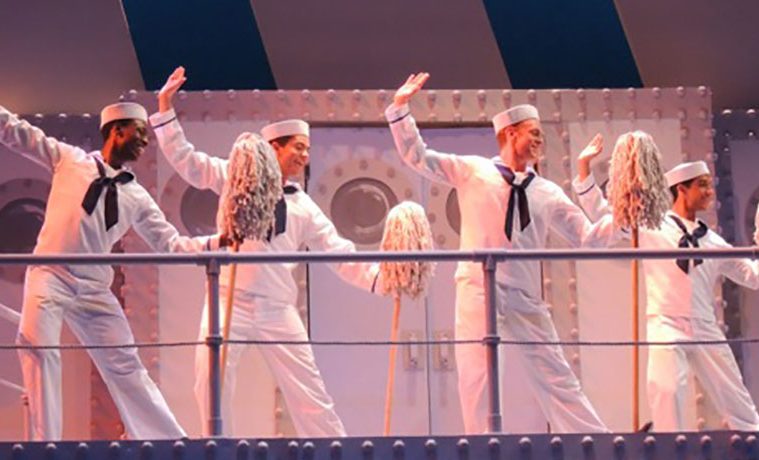 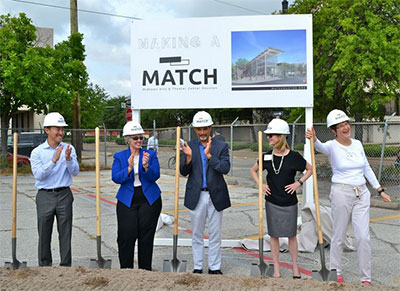 “I always knew this day would come,” bellowed Emily Todd, MATCH board president at the May 7 groundbreaking for Houston’s new Midtown arts mecca, to be completed in Fall of 2015. Well, I didn’t know that day would come. It has been a decade in the talking/planning. We even included a story about the complex in Arts + Culture Houston’s premiere issue back in 2011. But Todd, unlike me, is an arts optimist. And indeed the earth is moving as I type. I drive by several times a week to cheer on the trucks. Texas has it going on right now in terms of new structures in process and planning. Just looking at those surreal architect renderings, featuring young slim people hanging around those pristine lobbies, gives me such a boost. It’s my new thing: new arts building therapy.

The MATCH couldn’t come at a better time. As Houston has seen the closing of Dominic Walsh Dance Theater and Hope Stone, the vulnerability of the middle has never been more on our minds. The fledgling mid-size organization is like the disappearing middle class, as the recent Center for Houston’s Future report revealed; things are tougher than ever for this sector. Never mind that there is no path to become larger, there is hardly a path to stay afloat. All of this proved a huge motivator for Todd, MATCH visionary Jill Jewett and her team. “The small/mid-size sector of the arts is really important; it offers opportunities for artists and audiences,” says Todd over coffee with her characteristic can-do spirit. 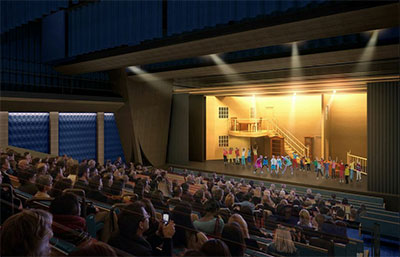 Within minutes of our conversation Todd is sketching out the new complex, which will include a 350-seat house, three black box theaters, and two small performances spaces. There’s even a fancy dance-y Harlequin floor in one of the spaces. “I’m hoping that the MATCH will develop a built-in audience,” I tell Todd. “Exactly,” she replies. “People love a hub, they are drawn to that kind of energy.”

There’s a flurry of dirt moving in the direction of making things better for artists in Houston right now. The Alley Theatre temporarily moves to University of Houston next season, while their iconic downtown fortress, designed by Ulrich Franzen, gets a much-needed makeover. I’m excited about more interaction between UH students and the Alley. Who knows, maybe Alley audiences will head on over to the Blaffer Art Museum and UH students might follow Alley back into their spiffed-up home. There’s such potential in this temporary move. Plus, the parking is free, people!

I sat down with AD Players founder Jeannette Clift George back in 2003 when she showed me the plans for their proposed 48 million complex with three theaters in the heart of the ritzy-but-theaterless Galleria area. The project, now split into two stages, is to be completed in 2016. New buildings are for the patient. Meanwhile, even further west, The Country Playhouse transforms itself into Queensbury Theatre, with a new state-of-the-art 250-seat main stage and a black box, opening in early 2015. 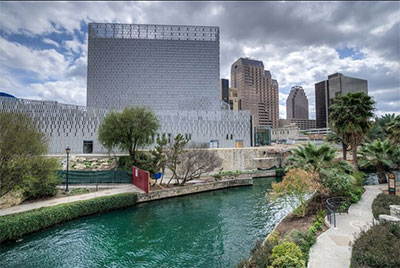 Audiences can arrive by water taxi at the new Tobin Center for Performing Arts in San Antonio.
Photo by Siggi Ragnar.

While all that earth is moving in Houston, the finishing touches are being put on The Tobin Center for the Performing Arts, which opens in September with several days of performances and events. I have visited so often, they should give me a hard hat with my name on it. How many people can claim they went underneath the 1,750-seat H-E-B Performance Hall to see those moveable seats? I will be curious how much life changes for its resident organizations, especially upstarts like Opera San Antonio and Ballet San Antonio.

The folks at Austin Playhouse are dreaming big with their capital campaign to build a permanent home in the Mueller Town Center, which will include a 227-seat Main Stage Theatre, a 100-seat Larry L. King Theatre, accessible parking, an acting school, an art gallery, Austin Java Restaurant, a lobby café/bar, classrooms, a rehearsal hall, and an event space for community use.

It’s not always about a whole new building. It’s more a case of walls and those damned pillars (structural columns) moving at Main Street Theater as they renovate their cozy digs on their Times Boulevard location in Rice Village. It may look like a modest renovation, but it’s huge for the actors and audience. 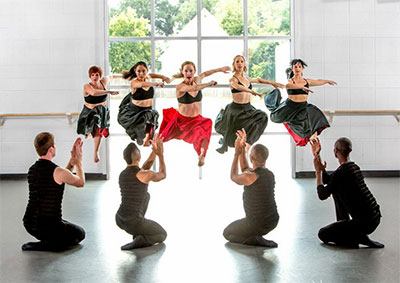 Or how about a roof that doesn’t leak? Company on Stage took a year off to get a new roof for their theater in Westbury, a Houston neighborhood in comeback mode. I’m sure glad that there’s a handsome new copper roof at Miller Outdoor Theatre for Dance Theatre of Harlem when the company comes to perform on that historic stage on July 23.

Here’s the thing: substandard conditions don’t generate the best artistic output. Nor does all the energy it takes to secure an affordable space. Look at how well Stark Naked Theatre and Mildred’s Umbrella Theater Company are doing in Studio 101: Without the worry of the “where” they are free to focus on the “what.” I know I could have written a story about all the things that have gone wrong in the name of new buildings. We only need to look at the tragedy of the August Wilson Center in Pittsburgh (PA) to know the risk of over-investing in bricks and mortar. I don’t think that is the case for Texas. When I look at how some recent new arts buildings have turned out, it has only been good for the artists under those new roofs.

The Gaertner Performing Arts Center at Sam Houston State University is as dance-friendly as it gets. When Dana Nicolay pointed out a freshman taking class to me in one of their sunny studios he proudly told me that she would never know anything different. Nicolay actually worked on the design committee and the students perform in a theater created especially for dance.

Houston Ballet’s Center for Dance has allowed the academy and the company to expand. Houston  just celebrated one year their new Caroline street digs, a world apart from the dilapidated building that housed their operation for a decade. The ZACH Theatre in Austin has settled nicely into their sleek tower, while Amphibian Productions in Fort Worth managed to transform a hip hop night club called Club Mystique into their new space.

This past April, Texas State University christened the Patti Strikel Harrison Theatre in their new Performing arts Center with an award-winning production of Anything Goes, directed by Kaitlin Hopkins. “It is almost impossible to find the right words to describe how our lives have changed since we have had the opportunity to work in the new Performing Arts Center,” says Hopkins, head of Musical Theatre. “Our students, designers and faculty are now able to do their work on the highest level possible because of the access we have to state-of-the-art equipment and facilities. Just having the orchestra pit alone is an incredible experience for all of us.”

So why do I care about all of this so much? Because during my own performing career I danced in way too many places that I wouldn’t want my mother to see. That’s why I am rooting for the MATCH to succeed. “Artists need proper facilities that are clean and safe,” Todd explains, as we were saying our goodbyes. Yes they do, so let the earth continue to move in the name of art.