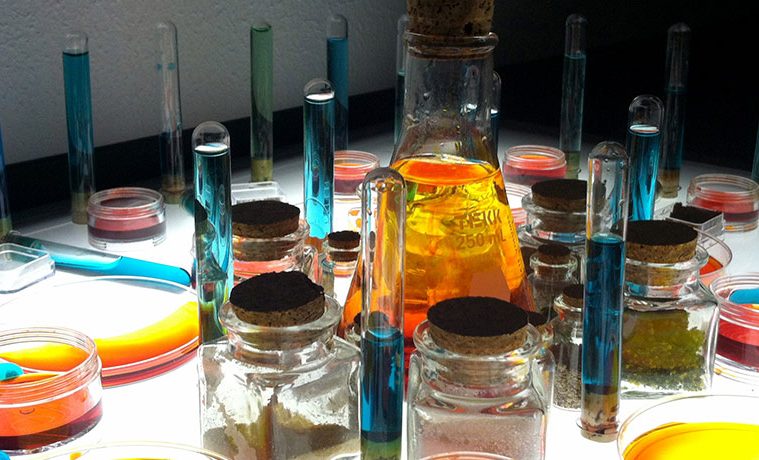 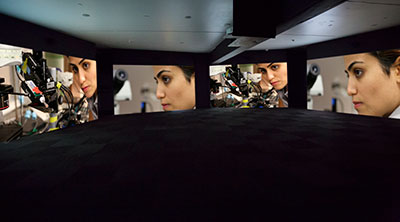 If I haven’t returned your email, my apologies.  I’m walking all the time now, to prevent Alzheimer’s.  It’s really our only hope. I learned that from Dr. Jason Eriksen, associate professor of pharmacology at University of Houston, during his talk on the science of exercise and Alzheimer’s Disease at Blaffer Museum of Art. You heard me right: A lecture on Alzheimer’s, presented as part of the Blaffer Innovation Series, in conjunction with Janet Biggs: Echo of the Unknown.  Looking over the recent programs, you might think that “B” sticker you slap on when you enter the Blaffer stands for “brain.”

If I were to pick a theme that emerged this season on my art travels, it has to be a deepened conversation between art, science and health. There are a million and one ways these two worlds collide, the best of which is where the artists stay artists and the scientists do not pretend to be artists. And in that way, Blaffer takes the lead, starting with Biggs herself, as she let her own family history with memory loss arouse her curiosity about the spaces and places scientists occupy, and integrated them into her work in a poetic frame. In Can’t Find My Way Home, Biggs cleverly juxtaposes scenes of her exploring Merkers Cavern in Germany with Jokubas Ziburkus’ biochemistry lab at UH. The mind is like a cave. Biggs is back this month with If Ever I Would Leave You, where she further explores the erosion of memory and identity, this time through performance with the amazing Lisa E. Harris, on April 16 at Project Row Houses Courtyard, as part of the Mitchell Center’s CounterCurrent Festival, in partnership with the Blaffer and independent curator Janet Phelps. 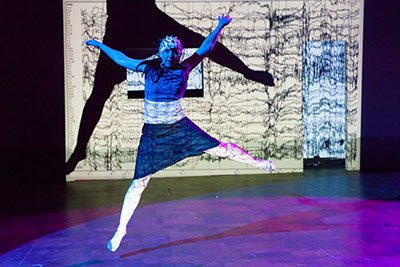 Becky Valls, associate professor of dance at UH, performs Red Square, while her brain waves alter the lighting, as part of Blaffer Art Museum’s Innovation series in conjunction with the exhibit, Janet Biggs: Echo of the Unknown.
Photo by Lynn Lane.

Blaffer Deputy Director James Rosengren is the mastermind behind the Innovation Series, which involved a series of science and health focused talks and events, including Dr. Jose L. “Pepe” Contreras-Vidal’s lecture, Your Brain on Art: Understanding the Brain in Creative Action and Context. Contreras-Vidal wants to know what happens when we look at art. So do I! I first encountered Contreras-Vidal when my friend Karen Bradley, head of the dance MFA program at the University of Maryland, came to Houston to work with him on a project several years ago, bringing a team of Laban-trained movers with her. UH dance professor Becky Valls popped in to watch, which led her to working with Contreras-Vidal in a performance of Red Square, with a skull cap monitoring her brain waves. Valls has been training elementary science teachers to use creative movement as a teaching strategy for 15 years. She sees a direct connection between Contreras-Vidal’s work examining the activity of the brain during expressive movement and responding to art and her work at the UH Charter School, where she is investigating embodied learning. 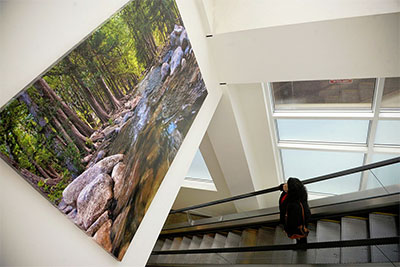 You might also recall Contreras-Vidal’s team at Dario Robleto’s exhibit at the Menil, where viewers had the option to wear a skull cap so that their brain activity could be recorded. In fact, the science thread began in the Fall with Robleto and the outstanding programming that accompanied his Menil show, The Boundary of Life is Quietly Crossed. Robleto brought together O.H. “Bud” Frazier and William Cohn, Houston’s two famous cardiac cowboys, who regaled us of the story of the beatless heart, which was featured in the show. Frazier is chief of Cardiopulmonary Transplantation, program director and chief of the Center for Cardiac Support, director of Cardiovascular Surgery Research at the Texas Heart Institute and chief of the Transplant Service at Baylor St. Luke’s Medical Center. Cohn is a cardiovascular surgeon and the director of Minimally Invasive Surgical Technology at the Texas Heart Institute at Baylor St. Luke’s Medical Center.  He is the co-director of the Cullen Cardiovascular Research Laboratory and an Associate Professor of Surgery at Baylor College of Medicine and Adjunct Professor of Bioengineering at The University of Houston. (I love those multiple titles; you get those when you figure out how to replace the human heart.) But really, this must have been a historic moment for the Menil. 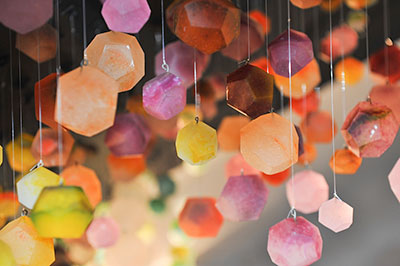 Later that same week, I found myself on Frazier and Cohn’s home turf at St. Luke’s, to see The Art of Healing—Michael Marvins’ first permanent installation at Baylor St. Luke’s Medical Center. I’ve spent enough time in hospitals to know that it’s a difficult time. To look up and see Marvins’ serene landscapes reminds every visitor that beauty is nearby. While I was visiting, my guides shared a video about Dr. Frazier and Dr. Cohn, and there was Robleto doing some of the talking. Art and science coming full circle, with an artist doing some of the explaining. Simply brilliant.

Traversing from the brain to the heart leaves us plenty of room for outer space, another yet another part of our Houston DNA, which unfolded at the Menil during Robleto’s inclusion of the golden record and the re-telling of Ann Druyan’s story. Down the street, the sounds of the stratosphere animate George Bures Miller’s and Janet Cardiff’s spinning antique mirrors in The Infinity Machine, an installation at the Menil’s Byzantine Chapel, while Jo Ann Fleischhauer, who has built a career intersecting with scientific material and institutions, contemplates the cosmos in the sky and the fracture at The Mariago Collective through April 25. From the constellation of dodecahedrons and Buckyballs suspended from black ellipses on the ceiling, to the words/concepts stenciled on the walls, it’s clear how much the poetics of science has penetrated her thinking. The installation’s design even evokes a laboratory setting. 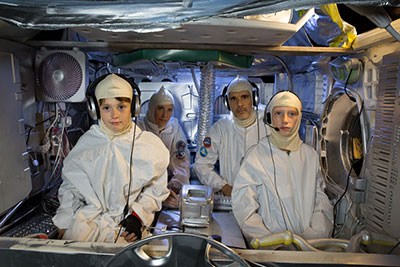 Hillerbrand+Magsamen take a more whimsical spin in space in Higher Ground, an interdisciplinary mix of video, sculpture and photography, a commission for the Houston Airport System, City of Houston Civic Art Program. Hillerband+Magsamen and their children dismantle their Texas suburban home so that they can build and fly a rocket ship. It’s witty, clever and a touch eerie, yet pays homage to the sheer ingenuity involved in any space program, including  a nod to Apollo 13 team, who literally solved the “Houston problem” with things lying around the space ship. HGOco is taking a different approach in September with O Columbia, a chamber opera in three acts by composer Gregory Spears and librettist Royce Vavrek, which will be informed by interviews with the NASA community. 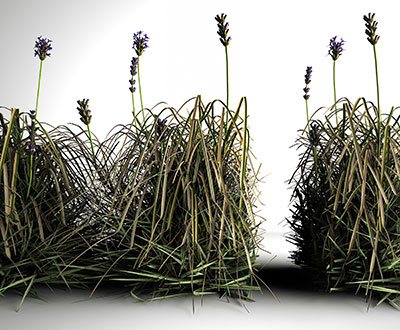 And lots of Texans are excited to see Michelle Ellsworth perform her own riff on the end of men in Preparation for the Obsolescence of the Y Chromosome at the Fusebox Festival, a co-presentation with Women and Their Work, on April 8 & 10 at Ground Floor Theatre, with an artist talk on April 9 at Women and Their Work. Ellsworth bends the science/performance concept in witty and wonderful directions.

Then we come back down to earth in Urban Ecologies, through April 12, at Galveston Arts Center, with Barometry Projects,  Anna Walker and Laura A. L. Wellen’s new curatorial initiative. The exhibit focuses on the meeting between the natural world and the urban environment, and includes works by Krista Birnbaum, Jorge Galvan Flores, Amy Sacksteder, Leslie Shershow, Thuy-Van Vu, and Eric Zimmerman. 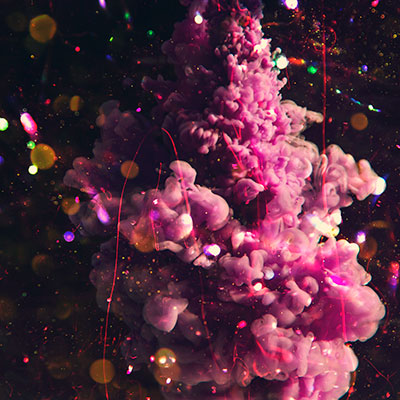 And finally, the perfectly-timed Fresh Arts show SUPERNOVA explores the intersection of art and science, March 27 – May 9. Curated by Krista Steinke and Sherman Finch, SUPERNOVA includes work by current students and recent graduates of the MFA and MS in Visualization programs at Texas A&M University. I look forward to seeing how these artists seek inspiration from science. Let’s keep these worlds colliding.