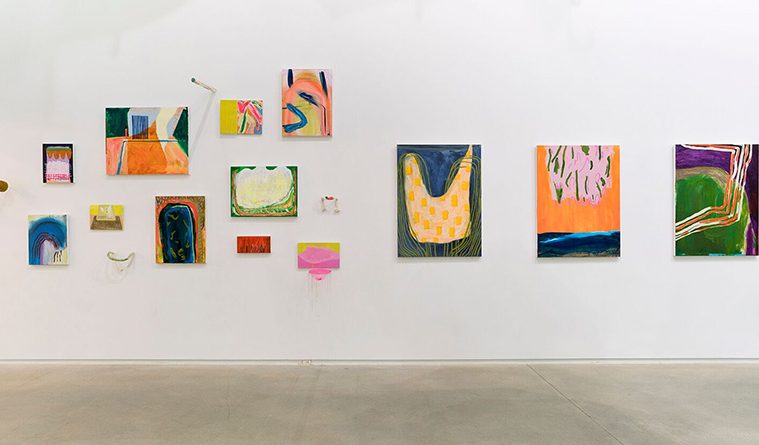 Political and Promising: The 39th MFA Exhibition at Blaffer Museum 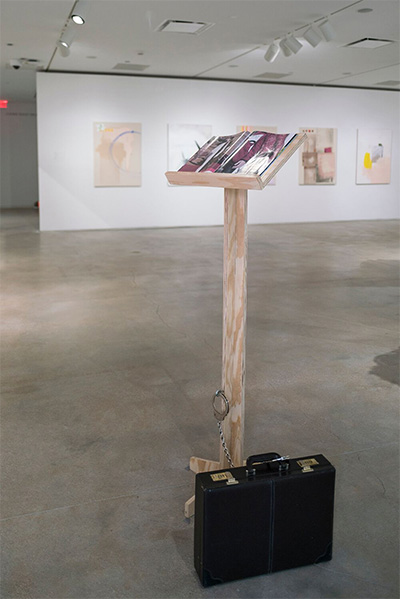 There are 15 artists in this year’s 39th MFA Exhibition at Blaffer Museum, which runs through April 22.   Given the situation the world is in today, I would have expected more political art but there were a few overtly political pieces. For example, Chad Scott created a multimedia installation called Transcript, a room-size installation with 13 video monitors and a disco ball hanging from the center of the room. The room is darkened and the video and audio from the screens creates a visual and audio cacophony. The videos are all newscasts from the 2016 presidential election. As a work of art, it falls short—surely everyone who saw Transcript has already experienced the cacophony of political coverage it depicts. The installation doesn’t shed any new light on this shared experience.

Laura Hill’s –typed deals with race and our stereotypes about race, and uses polling to try to tease out stereotypes about different racial and ethnic groupings (for instance, what type of food do Asians like to eat? The most common answer was “rice”). However, the second half of the artwork, was not as successful. The viewer is invited to take a small sphere of various colors which could be associated with skin and drop it into a slot labeled as one of the stereotypes identified by the poll. It didn’t work because, in order to participate, the viewer had to identify the colors as a racial grouping—which would be hard—and then associate that grouping with a stereotype—harder if you feel that such stereotypes are incorrect or unhelpful. The only way to win was not to play.

In both these pieces, the political aspect of them seemed simplistic. I was mystified but more engaged by some of Eric Thayer’s work. A lectern with a briefcase chained to it with handcuffs: the briefcase and handcuffs suggestive of someone carrying super-sensitive documents or valuable bearer bonds, and the lectern suggesting a town hall meeting or some other kind of public discussion. The juxtaposition of the two was oblique but suggestive. It’s called Platform, which suggests a political interpretation. His piece Grid consisted of the forms from people applying for Social Security numbers. Was it a comment on bureaucracy or citizenship? Perhaps relating to the illegal status of many workers who cannot benefit from Social Security? 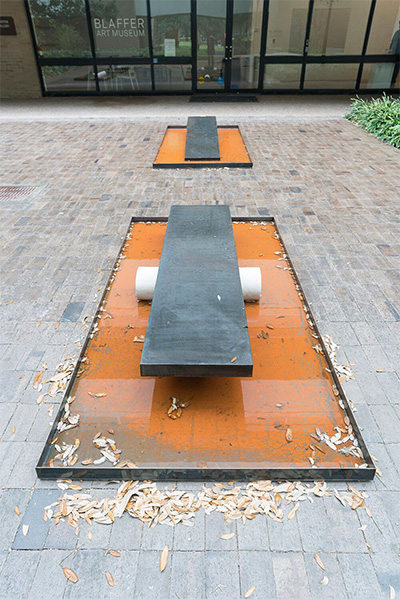 Duvall’s other large piece in the exhibit was Parable, Parable, Parable, Parable, Parable, which consists of five large electric fans arranged on the floor. The information card said that they were “altered” fans, but to me it looked like they were straight out of the box from Home Depot. And although they looked pretty cool, all splayed out on the floor of the gallery, it seems like in 2017, the 100th anniversary of the most infamous readymade sculpture of all, Marcel Duchamp’s Fountain, maybe a bunch of readymades is kind of an academic form.

The most beautiful, and in some ways most traditional, artworks in the exhibition were a wall full of abstract paintings by Erika Harper. The paintings are small and colorful and often accompanied by wall sculptures made of extremely modest materials like florist foam, wire mesh, rope, and yarn. Composed of swirly brushstrokes that range from watery to opaque, they have a kind of hand-writerly loopiness that feels very personal. Imagine very small, candy-colored Arshile Gorky paintings and you’ll have an approximation of what Harper is doing in her work.

But my favorite works were by Tracey Ceniceros. She had a gallery to herself full of paintings, silkscreens, and videos, all having to do with traffic and cars—a collective work is called Fragmented Rd. The images are highly abstracted (in some cases completely abstract), but they all seem to be derived in one way or another from photos. But in the process of taking them from photo to painted image, Ceniceros has given herself permission to depict them very crudely. The images are rough-hewn and all the more powerful for it. Because you are completely immersed in this room full of cars and traffic, including a startling video loop of a burning car that is surprisingly painterly, it has something of the effect of being in traffic. It is a universal experience for drivers and well depicted in Ceniceros’s work.