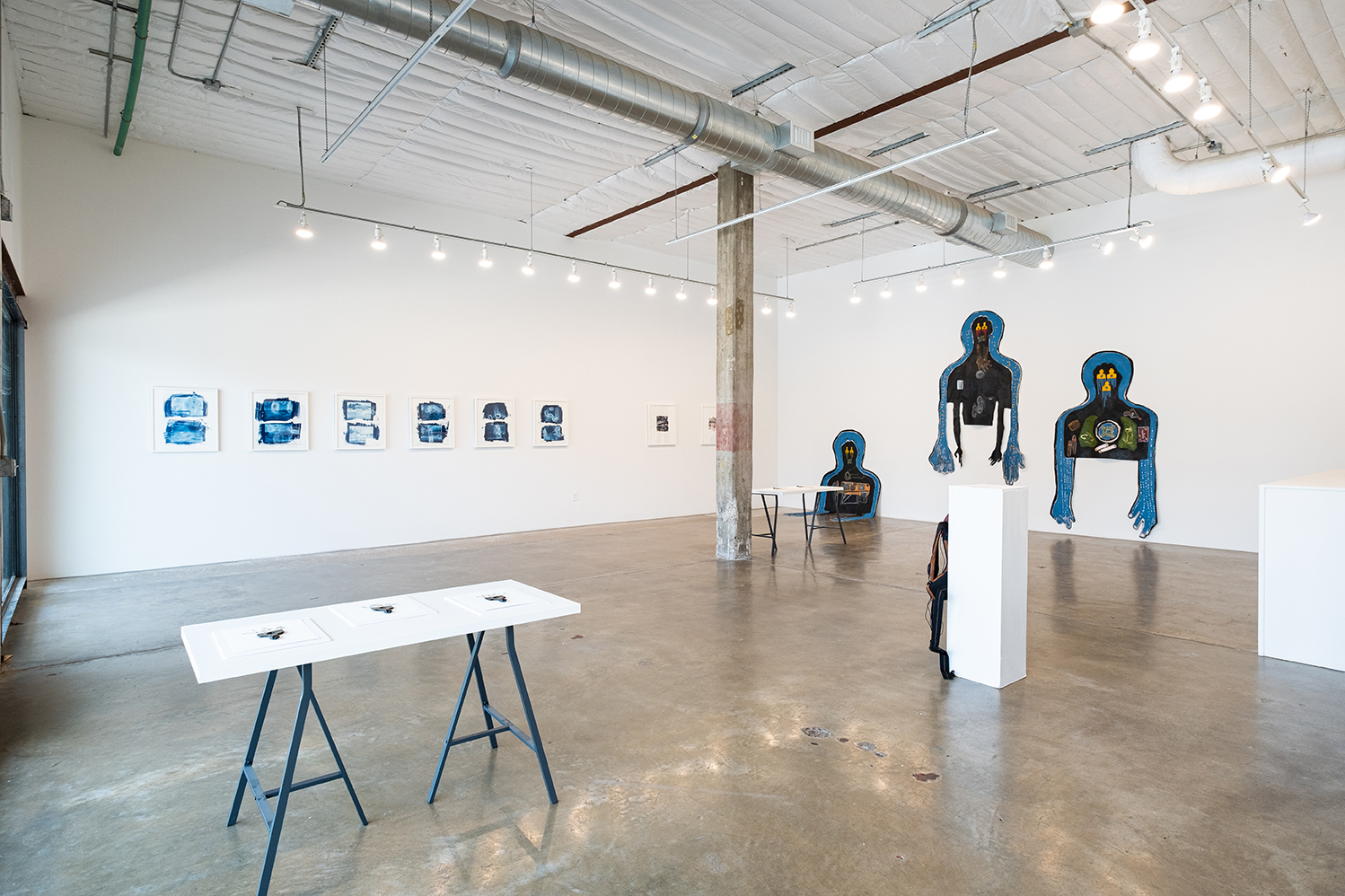 Over the past two and a half years, as Blay was immersed in his writing and editorial work at Glasstire, his thoughts became increasingly focused around writing, text, and language. His studio practice soon began to absorb some of those connections.

“I started playing with the idea of how meaning is encoded in language,” says Blay. “Every curator I know is also a writer, out of necessity, as part of the practice.”

Fittingly, he was already percolating some powerful ideas when he received the invitation from Big Medium to show his work. With Power, Traps, and Targets, his first solo show in three years, on view in Austin through Oct. 9, Blay continues his focus on the struggle for justice and equality. And the relationship between power and language—whether visual, spoken, or written—is front and center.

The artist explains that he came to his own layered practice relatively late, pursuing photography at the Tarrant County College, then at Texas Christian University where he majored in photography and art history which gave him a strong introduction to academic art. In 2000, he formed the photo collective Group F8, the germination of his curatorial curiosity, with original members Julie Almendral, Elizabeth Bowie, Tanya Habjouqa, James Johnston, Loli Kantor, and Nick Prendergast.

­­­
“In the course of making art over the past fifteen-plus years, the things that began to impact me were not only my own curiosity about the medium of photography, which led me to installation art, but also the impact of injustice and inequality on my life and on the lives of people who look like me. It’s pretty difficult to continue making conceptual work that is divorced from the reality of living as a Black man in America,” he says. “I began to respond to that not only in art making but also in seeing how that disparity impacted communities where I lived and communities that were close to all of the art spaces that I visited regularly.”

Power, Traps, and Targets, the title of which is derived from the common shooting range target sheet and the Black power fist afro pick, brings that reality to the fore.

“The exhibition surveys issues that are important to me. Being part of the fight for justice and equality through art and social practice is embedded in this work,” he says.

Integral to the exhibition are ideas of power—who or what has it or wants it, when and where it changes hands and forms. Further contextualization lies in the phrases of our everyday language—power grid, power grab, power surge, power failure. 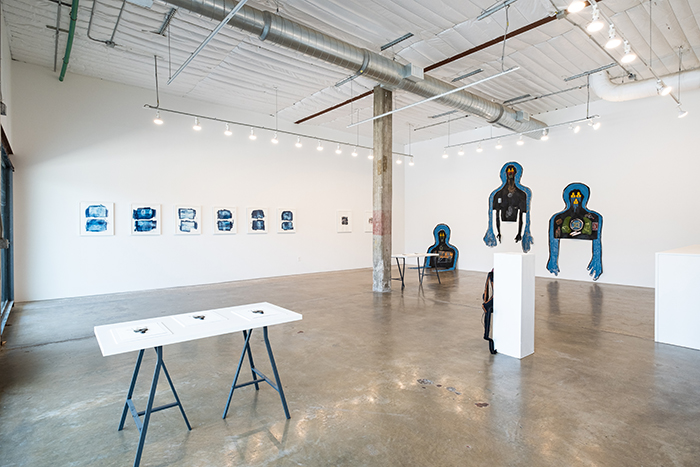 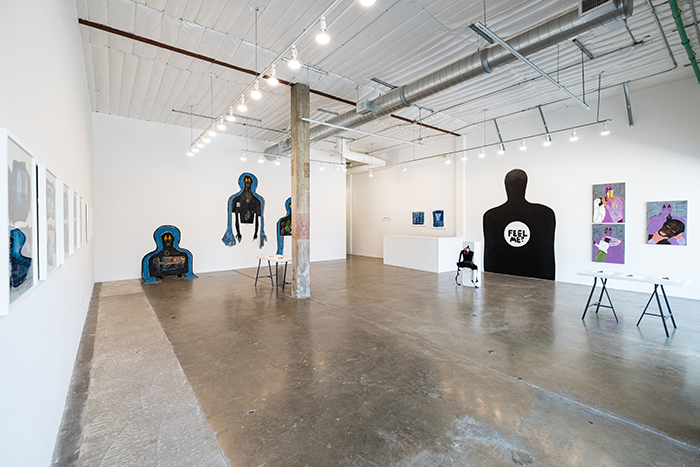 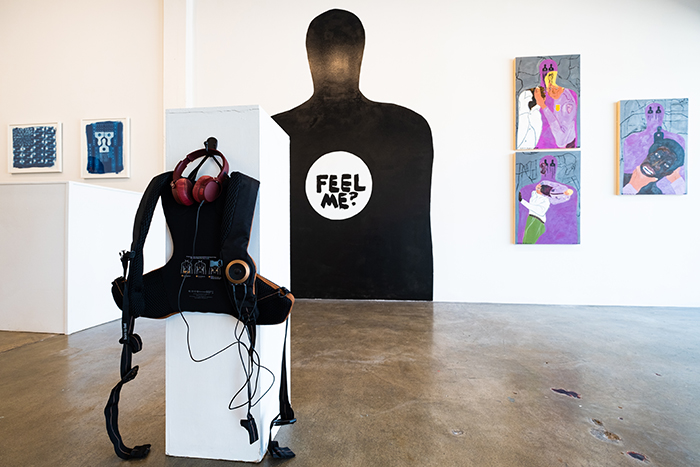 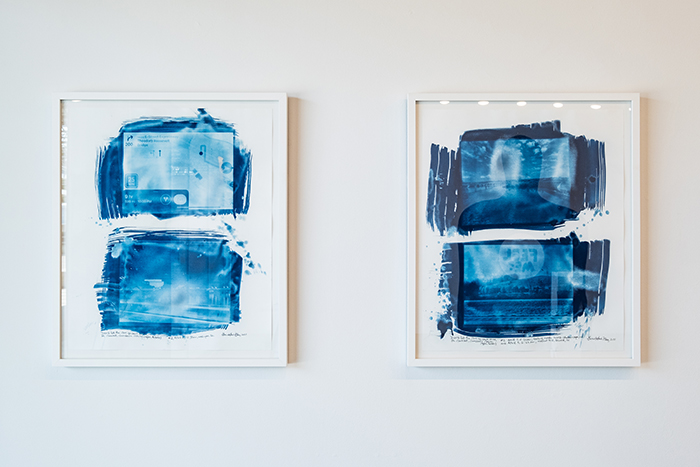 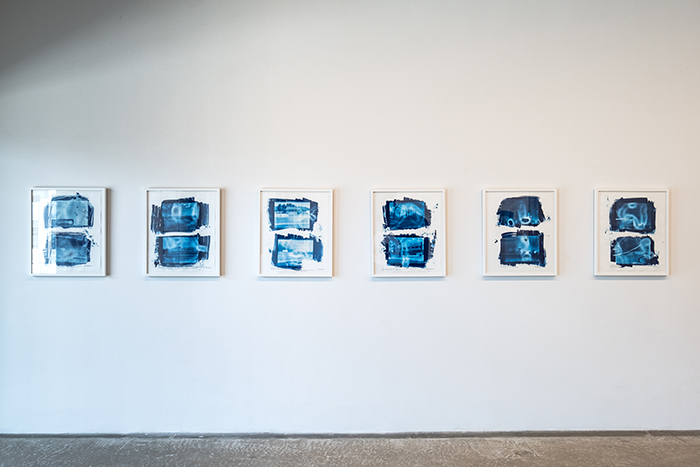 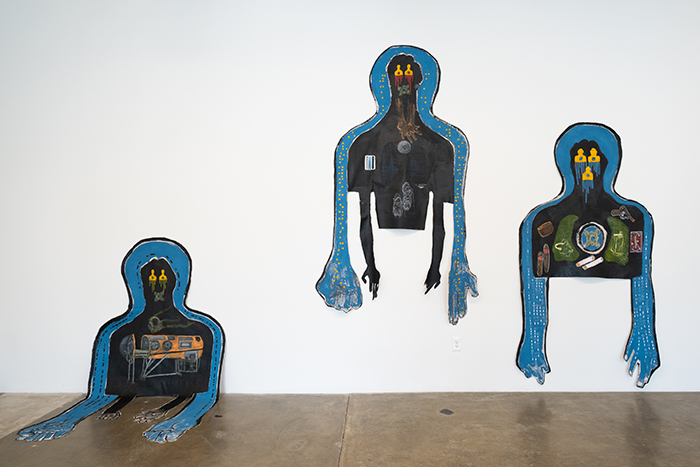 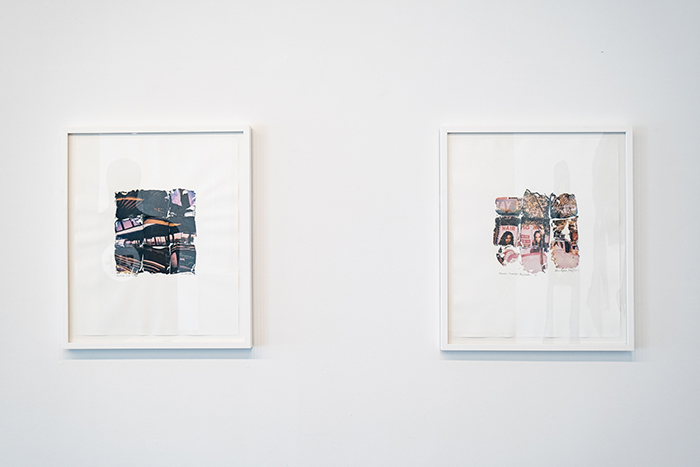 Power, Traps, and Targets features painted figural cut-outs, a participatory sound piece, cyanotypes, and photographs, including Polaroid transfers, a process by which Blay physically removes the image, separating it from the paper and plastic backing of the print, floats it in water, then painstakingly applies it to watercolor paper.

For the series of Polaroid transfers titled Power Transfer, Blay made pilgrimages to sites of police brutality against Black people. For example, he photographed the store where NYPD officer Daniel Pantaleo choked and killed Eric Garner, and the train station platform in Oakland where BART police officer Johannes Mehserle shot and killed Oscar Grant.

Blay wanted to encode the exhibition with the language and the information that these cases provide, rather than create overt or didact relationships. His choice to employ conceptual and physical means to transfer and transpose the images is just one of his approaches that allows for a shift in power dynamics.

Throughout the other works in the exhibition, Blay uses symbols and codes that speak an Afrofuturist language (a sensibility that has appeared in his previous work as well) such as Liberian Nitien, framed here as a symbol of protection, from the Kru and Grebo tribes of Blay’s father and mother, respectively. And viewers may recognize similar target range silhouette cut-outs from his earlier works such as Cos N!&&@+$ Can’t Breathe, an “installation that inhabits the agony of black bodies under fire from police. 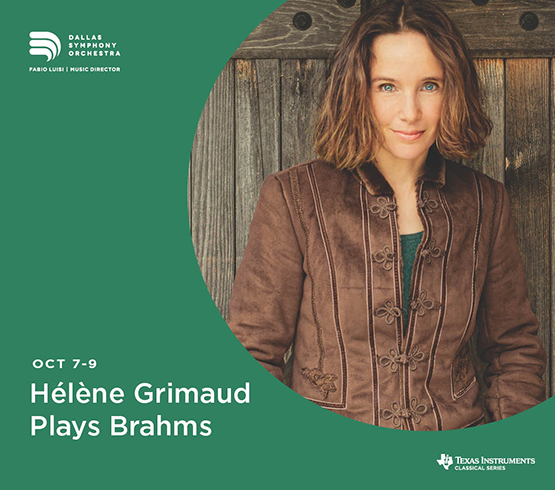 Other codes in Power, Traps, and Targets refer to morse or binary code as well as embedded sound, recordings of what he has spoken and recorded relative to events covered in the news, for example the last words of someone who has been killed, or slogans from the justice and equality movement. Blay emphasizes that it is not important to decipher these codes precisely but rather to recognize their symbiotic nature.

“This body of work, the embedded codes, materials, and information, speaks to how the lives of the folks directly impacted by injustice is impacting society in the struggle for justice and equality,” says Blay.

Symbiotic nature also plays a role in Feel Me, a participatory, wearable piece for which exhibition visitors don headphones and a haptic vest to hear and feel the reverberations of the recorded sounds of gunshots. While the connections to police killings by gunfire are obvious, the phrase “feel me” on the black target silhouette in the vest wearer’s line of sight points equally overtly to the power of language.