Powerful and complex: Jill Magid reflects on Labor and Value at The Modern

Early in the COVID-19 pandemic, when death counts dominated the daily news and the world suddenly shut down, a man’s declaration on television inspired artist Jill Magid.

“What I love about the metaphor is that you have what the phrase implies: everything was always good, but that was a myth. Everything was already bad,” the New York artist said.

The phrase became a starting point for Tender, her 2020 commission by New York-based public art group Creative Time. The massive project follows the circulation of 120,000 pennies with the declaration, etched on the edge, beginning at bodegas across New York City, where she lives. (The 120,000 pennies are the equivalent of the $1,200 stimulus checks sent to all Americans to boost the economy; a penny’s smooth edge made it the most practical choice of all coins.) Creative Time called the project its most ambitious to date because its life span, like coins, could go on for 40 years.

Works stemming from the massive public artwork, including sculptures and a film, are displayed in the exhibit FOCUS: Jill Magid at the Modern Art Museum of Fort Worth, which runs through March 20.

She used coins because they, like cash and unlike credit and debit cards, are tangible objects; they’re touched by each person who uses them. Circulation is a system, which Magid studies and often intervenes in.

“The pennies represent the body in all forms, and the body,” Magid said. “The body politic, economy, government and the individual body holding the coin” are at the core of the project.

The small, independent storefronts, she argued, are essential businesses used by everyone regardless of socioeconomic status. In the public’s eye, they are essential. But that’s where the public and government differ. In the case of the Federal Reserve and U.S. Mint, which distribute new coins, bodegas and other businesses receive coins after they’ve already circulated. They are peripheral.

She wanted to upend that. By adding her own labor to the coins and choosing to distribute them first at the bodegas, she challenges how the process changes the value of money, and the value of labor itself.

Elsewhere in the exhibit, the pennies appear in works such as the sculpture Tender Box (2020), a small cardboard box packed with 50 rolls of the engraved unused pennies standing in for the public artwork. 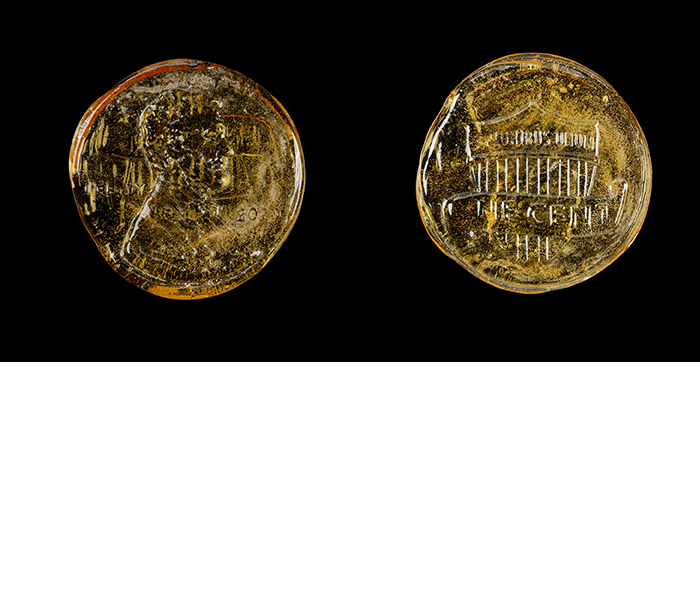 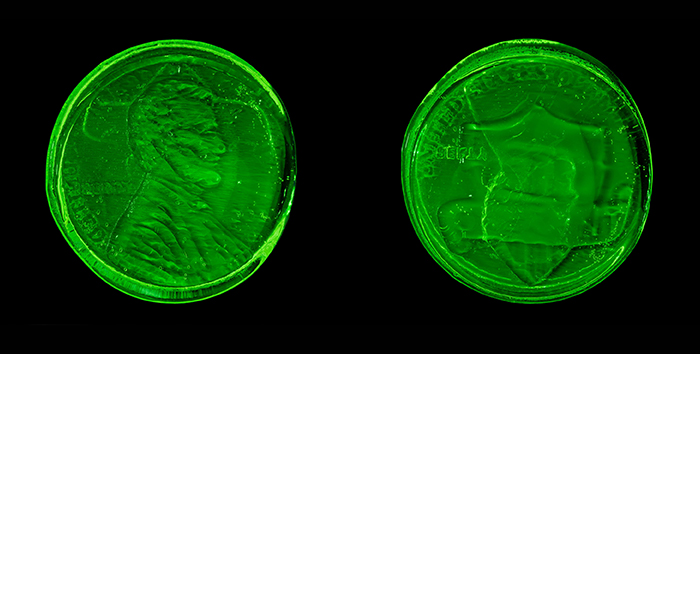 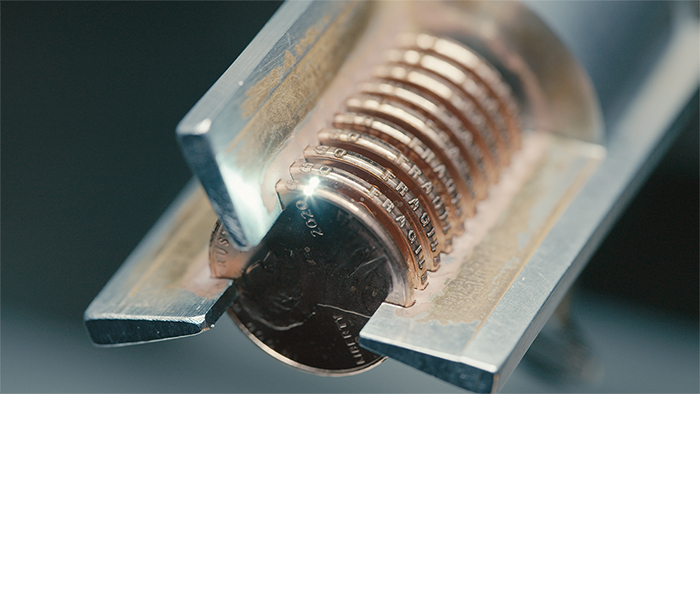 “What I like about the box is it is presented in a different way. What I’m showing is conceptual. The sculptural presence is an item in and of itself,” she said. Tender Box and the other works are separate from the project itself and made after distribution.

In 2020 Cents / U.S. Mint Ballistic Bag, $4000 Value, Partially Dispersed (2020), the pennies weigh down a bag in a steel palette borrowed from the U.S. Mint. “These functional objects have been diverted from circulation temporarily, pausing here in the museum,” Hearst said.

Magid also reimagines a 1942 wartime experiment of glass pennies, some of which were made with uranium, while copper was used for ammunition. That piece, Pattern Pennies, also from 2020, is a wall cupboard of glass coins glowing beneath a blacklight.

The 28-minute video Tender Balance (2020) follows the distribution of the pennies, focused on individual exchanges as well as imagery that came to define the pandemic, including a refrigerated morgue truck, set to an original haunting score in the background.

Newer works, such as Bodega Flowers (2021), consider the role of essential workers. It is an installation of the fresh-cut, cellophane-wrapped flowers such as those found for sale outside the shops. When thinking about the bodegas and flowers, she considered how agricultural workers were deemed essential labor. “Flowers evoke both joy and sadness. During the isolation of a nationwide lockdown, flowers both could brighten someone’s day and serve as a way to memorialize someone who died from COVID-19. Flowers, in my interpretation, are a public good,” Magid said.

With Labor Days, a work of drawings and sculptural installations from 2021, complementing the themes in Tender, she again thought about labor and whose labor is valued. Just as she inserted herself onto the coins, she inserts herself into formal declarations by the federal government found in the Federal Register. In the government’s official journal of agency rules, declarations and other bureaucratic documents published every weekday, Magid discovered two similar presidential proclamations issued on two different Labor Day holidays. The first was from former President Donald Trump thanking essential workers for their work without mentioning the pandemic. The other was a similar declaration by President Joe Biden. She replicated them, hand tracing the words onto the resulting six feet tall works. Every hour, she documented her labor in the margins. The resulting work is a documentation of her labor in these presidential gestures, an act as big and similar to spending pennies at a bodega.

Eerie, powerful and complex, threaded together, the show is “a poetic reflection on value,” Hearst said.