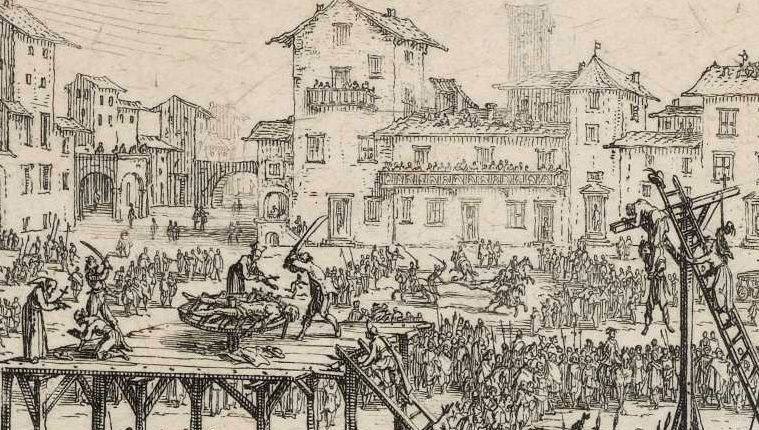 Jacques Callot is surely one of the best, price most influential artists you’ve never heard of.  Unless, shop of course, sales you’re part of a persistent cult following that Dena Woodall, the Museum of Fine Arts, Houston’s assistant curator of prints and drawings, has encountered while preparing the first Callot exhibition in nearly 40 years.

The fact that it’s taken so long is both perplexing and indicative of the hardy patience of Callot lovers, who haven’t exactly been inundated with chances to see his work. Well, maybe it’s not entirely perplexing, since the 17th-century printmaker and draftsman never made a painting, and as Woodall knows all too well, works on paper just don’t enjoy the same prestige as their counterparts on canvas.

Callot is a case study in why that’s silly. He revolutionized the technique of etching and influenced the likes of Rubens, Rembrandt and Goya while demonstrating both astonishing levels of technical precision and a flair for surprisingly inclusive, elaborately detailed visual reportage – so detailed, in fact, that the work requires a magnifying glass to really see. (The MFAH has plenty on hand, along with a video monitor highlighting passages of The Fair at Impruneta, a particularly ambitious print.)

Improvements in optics helped enable the innovations of Callot, who became friends with Galileo while serving as a court artist for Cosimo II de’ Medici in Florence following an apprenticeship in Rome. While depicting contemporary events, ceremonies, theater performances and other spectacles for his noble patrons, Callot developed etching techniques that made it possible to replicate the linear precision and delicacy of detail of engravings, which require a much greater facility with metalworking.

He also became adept at depicting receding space and atmospheric effects after experimenting with a “stopping out” technique that allowed him to create an extensive variety of tones. This ability, combined with his extraordinary precision and knack for cramming hundreds of teeming figures into an often miniscule two-dimensional space, served Callot well even after Cosimo’s death in 1621 led him to return to his native Nancy, the capital of the duchy of Lorraine, where he increasingly produced prints for the growing merchant class.

Partly in response to a taste in the art market for images of the poor, Callot’s subject matter expanded beyond nobility to include beggars, Gypsies, peasants, and down-and-out soldiers. He was unusual in including images of both the “deserving” and “undeserving” poor in the same series, leaving later scholars to puzzle over his views.

“Although these types overlap—his Prodigal Son and distressed soldiers look like beggars, his peasants and Gypsies are both portrayed defecating—he differentiated each group,” writes exhibition co-curator Diane Wolfthal, an art history professor and humanities chair at Rice University, in the catalog. “For all types of the poor, Callot goes beyond stereotypes, inviting viewers to feel mixed emotions from disgust to sympathy. But he shows Gypsies in the most negative light as animal-like thieves and tricksters.”

Published in 1633, Callot’s best-known series, The Miseries and Misfortunes of War, was at least partly a reaction to the atrocities of the Thirty Years’ War, when French marauders – and the accompanying plague, which killed Callot’s father in 1631 – ravaged Lorraine.

“Although this series portrays the miseries that soldiers sometimes inflict on civilians, it also depicts the great suffering that soldiers experience once the war ends,” Wolfthal writes. “Just as today’s veterans have difficulty finding a job and housing and all too often descend into poverty and even homelessness, so Callot portrays similar consequences for the seventeenth-century soldier.”

In that respect, this compact yet dense exhibition of etchings packs a punch comparable to the MFAH’s recent, sweeping WAR/PHOTGRAPHY – even if you need a magnifying glass for its impact to hit home.