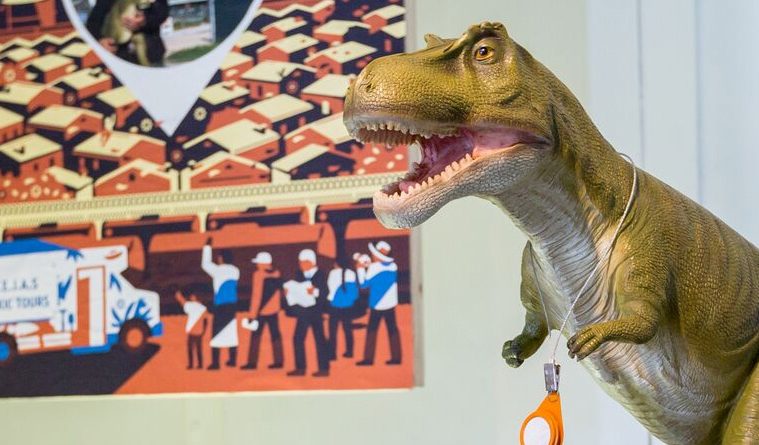 Mining the HMNS, The Natural History Museum (a project of Not An Alternative), 2016.
Photos by Alex Barber. 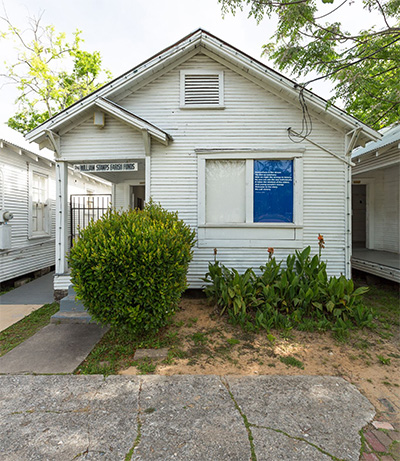 In the current round of exhibitions at Project Row Houses (through June 19), there is an uneasy relationship between the visual material and the political work. Shattering the Concrete: Artists, Activists and Instigators is guest curated by Raquel de Anda, and it includes installations by seven artists and collectives, including The Argus Project (Gan Golan, Ligaiya Romero and Julien Terrell), Charge (Jennie Ash and Carrie Schneider), Nuria Montiel & John Pluecker, The Natural History Museum (a project of Not An Alternative) in collaboration with T.E.J.A.S. (Texas Environmental Justice Advocacy Services), People’s Paper Co-op (Courtney Bowles and Mark Strandquist), Storyline Media (Rachel Falcone and Michael Premo), and Verbobala (Adam Cooper-Terán and Logan Phillips).

Much of the work being done in these collaborations is happening outside of Project Row Houses. Indeed, with few exceptions, these are not site-specific installations: they do not rely upon the actual place of PRH or the space of the row house as a relevant part of their propositions. Instead, in many cases, these are visual representations of political hopes, community organizing (in several cases, from other cities), and proposals for the future. The People’s Paper Co-op, for example, is a Philadelphia-based initiative that works with individuals who have been affected by the criminal justice system, offering them tools for advocacy. The Co-op also hosts monthly legal clinics across Philadelphia, pairing participants with lawyers who assist them in clearing their criminal records. Participants then make hand-made paper from the shredded pulp of their records, and they are invited to write new aspirations on the paper.

Storyline Media’s installation, The 28th Amendment, is based on years of research into the intersections between racism, economic discrimination, and the environment, especially in the recent U.S. housing crisis. Using a documentary tradition steeped in WPA-era aesthetics (photography and interview as instigators of social change), the installation imagines a future in which a constitutional amendment mandates the universal right to adequate housing in the United States. Organizers Falcone and Premo also look to speculative fiction, inviting viewers to imagine the ways in which they might participate in this future. 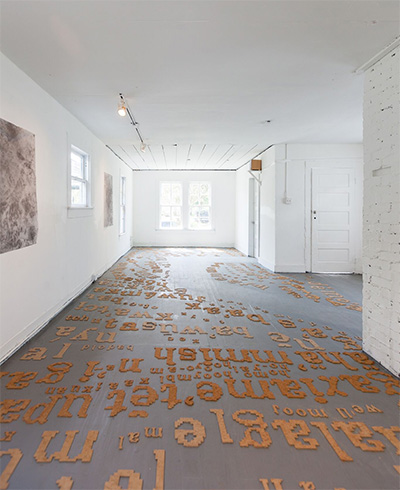 In each of the seven installations, a certain type of work is happening – what de Anda describes as “creative resistance.” We see the social problem, and we see organizers using visual data to connect with a community and to advocate for change. Where this round really shines, though, is in the contrast between two installations: The Natural History Museum, presented in a collaboration between New York-based Not an Alternative and T.E.J.A.S., and the installation KARANKAWA CARANCAHUA CARANCAGUA KARANKAWAY by Nura Montiel and John Pluecker. Both ask for a deeper engagement and careful looking at a specific place–Houston–over time. And both pose significant questions about museum and community, politics and organizing, spaces between things and people, and how change happens. Most importantly, they consider how Houston’s own history is based on making certain peoples, histories, and things invisible.

“Take a deep breath” says a hologram tour guide in The Natural History Museum. The guide then narrates a tour through one of Houston’s “fence line” communities: residential areas situated directly beside factories that release large quantities of toxins into the air and water. Why do the world’s largest energy corporations build factories in Houston’s poorest communities, the guide asks, and how does the absence of zoning restrictions affect the lives of our city’s inhabitants. The tour points to the intersections between poverty, immigration, absence of zoning and public transportation, and ecological disaster. The installation also directly critiques the energy-sponsored educational programming and exhibitions of Houston’s Museum of Natural Science, making visible the problematic politics behind how science is taught to Houston school-children. It pointedly connects the ethics of museums in the age of corporate sponsorship with the conditions of life in our community. When these things are made invisible, they are made to seem natural; The Natural History Museum asks us to re-think the unnaturalness of it all.

As in the other houses, Montiel and Pluecker’s installation is based in an ongoing activism and community engagement, but the exhibition itself makes use of visual language–both literally and figuratively. In delicate floor reliefs made of dirt, the two reproduce words from the Karankawa language. A First Peoples nation native to the Houston area, the speakers of this language and the language itself have been almost entirely erased from Texas history. The installation (which also includes a sound piece), then, is a reclamation, but also a statement of the many intangible points of disconnection that eventually undermine both personal and collective memory-making. As the installation succumbs to the elements and is bumped by visitors, it starts to dissemble and fragment. In fact, its dissolution is part of the piece’s power. 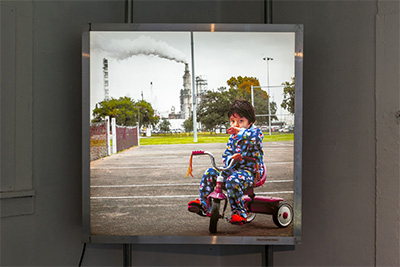 Mining the HMNS, The Natural History Museum (a project of Not An Alternative), 2016,

Whereas The Natural History Museum emphatically makes statistics and air quality visible, Pluecker and Montiel use poetry to think about visibility, and consider how things fall apart. They are poignant approaches, especially when seen in relation to one other. Poetry is also politics. Research is also visual material. Like Project Row Houses itself, Montiel and Pluecker’s installation allows for the space in which to think through our own contingencies, even as they are filled with complexities and holes and spaces between things. What The Natural History Museum does is stick its fingers into some of those holes and spaces, and ask why and how they exist.

In Shattering the Concrete, the balance between the physical objects of the exhibitions and their lives as organized actions outside the exhibition space is fragile, sometimes forced. Nevertheless, the exhibition addresses social and political challenges which are too-rarely considered in Houston’s cultural institutions. And so, if sometimes these outweigh the aesthetic propositions of the work, maybe that’s also a salient point. “We live in a historic moment, fraught with both crisis and complexity–where the dramatic transformation of ideas and institutions may be a precondition for survival,” de Anda writes. Transforming ideas and institutions takes fearlessness–a lot of it–and it’s a project that Project Row Houses has made its mission since the beginning. To be brave, to change how we think, to reconsider stale categories, to face off with the ugliness of many aspects of our world – all of that requires also making experimental stabs at how these things connect, without being too doctrinaire about how such experiments function, where they belong, or into which category or political platform they fit. There is much to be done, always. What I wish is that more arts institutions–those with huge endowments, wealthy patron groups, and glossy exhibition spaces–were also willing to take the risks to do this kind of work. Imagine that speculative future, for a moment.