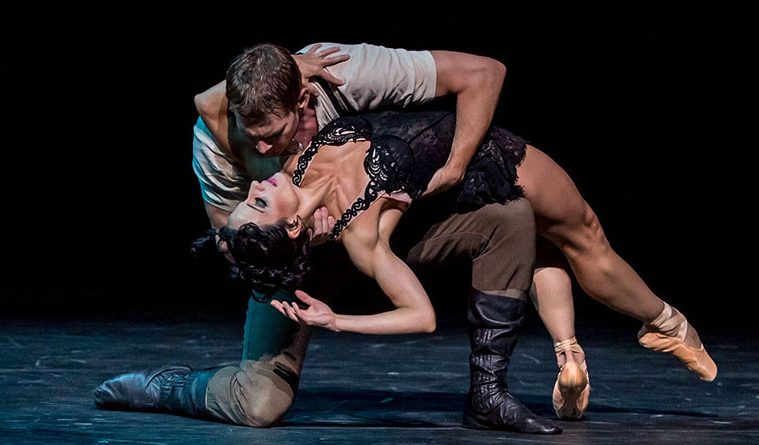 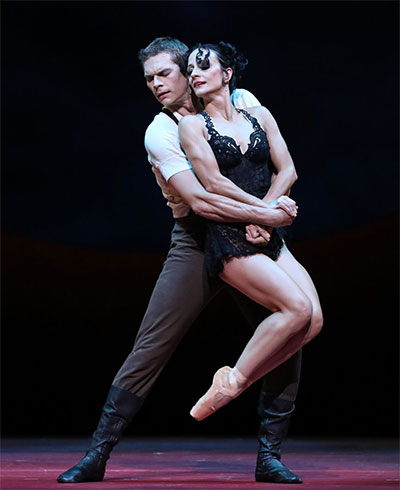 The fun part of Houston’s Dance Salad Festival, April 13-15, is in the mix of companies, dancers and choreographers. This year the lineup features dancers and works from Carolyn Carlson Company, Susanna Leinonen Company, Eastman (Sidi Larbi Cherkaoui), Norwegian National Ballet, Lil’ Buck, Shantala Shivalingappa and Texas Ballet Theater. Yes, Texas is in the mix! TBT stars Leticia Oliveira and Carl Coomer will be dancing a pas de deux from Carlos Acosta’s fiery Carmen. The real-life couple visited with us on dancing together on and off stage.

You two have been paired in many ballets. Do you have a favorite?

Leticia Oliveira: I will definitely have to say Romeo and Juliet. It was when Carl proposed to me. After being together for eight years and owning a house together, it happened very quietly, at home, on the afternoon before opening night. It was a private and special moment that involved one of our pugs delivering the ring. But as soon as we got to the theater that evening and we shared the news with our friends and colleagues, the stage manager immediately asked if we would let him share with the audience before the performance. When he made the announcement before the curtain went up, we heard a long “Aahhh.”

That is such a lovely story. What happened next?

LO: As the performance started, I realized how special it was for us to get to share that moment and performance with all these people, as we were about to embody such deep and wonderful characters and live such an epic love story. I have to say, no other performance in my career has felt that way, ever. There was something magical in the air. The next time we performed this ballet together, three years later, it just happened to be the first one after the birth of our son Tiago, so as you see it has been a pretty memorable ballet for us.

What’s most challenging about dancing with your real life partner?

Carl Coomer: I have to say that the same things that make it wonderful and special are the obstacles in this case. The honesty and the intimacy. There is no “beating around the bush.” You tend to be less polite and more direct. And the challenge for us was great, since we are both perfectionists. The more we danced together we were able to improve and figure out our dynamics. But at the same time, there is no better gift than to share such special moments of your life fully with your real-life partner. 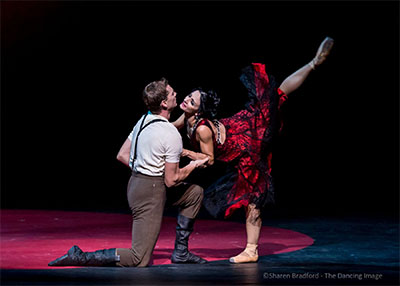 You both have Houston Ballet in your history, as does Carlos Acosta! He also got his start under Ben Stevenson.

LO: Ben has obviously been an inspiration for both of us as dancers. But when we got to work with Carlos in this ballet, it became clear to me the huge influence Ben has had on him and probably on us too. Ben somehow has the power to open up a special way of looking at the art form on the people he works closely with. It is such a great present he has given us.

Tell us about the Acosta’s Carmen.

CC: It is wonderful to dance to Bizet’s beautiful music and Carlos has created characters that are very real and less balletic. It was very important to him that they would walk like normal people and have their reactions as sincere as possible. In this pas de deux, there are lots of different moods to be captured, from flirtation, playfulness, seduction to actually falling in love with each other. So it can be challenging to shift smoothly through these emotions.

It’s great to see Texas Ballet Theater back on the lineup. For you, too?

LO: I have already had the pleasure of being part of the festival twice. Once, performing Tchaikovsky pas de deux with Zdenek Konvalina, while I was still dancing with Houston Ballet and then later with Carl performing From the Corner, a pas de deux Ben choreographed for us a couple of years ago. It is always a fantastic and inspiring experience. It is so terrific to be able to meet and learn from so many brilliant dancers from around the world.