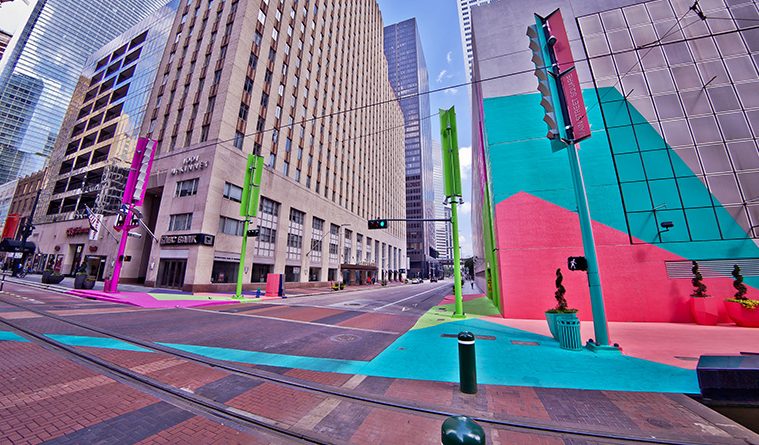 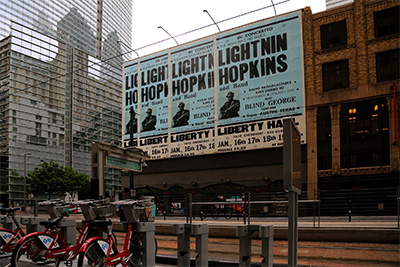 The blocks between 900 and 1100 Main Street are traveled by many Houstonians on their daily commute, but they constitute an inconspicuous corner of Houston. The Downtown District Public Art Committee, supported by the professional services of Weingarten Art Group, plan to change that through Art Blocks Houston, a collaborative project aimed at covering the area around Main Street Square with public art over the next 12 months and adding a bit of much needed animation to downtown Houston.

This timeline is not random, but targeted to cover both the NCAA Men’s Basketball Championship in April and the next Super Bowl, which will be hosted in Houston and add swarms of visitors to our city. The changes to the area will include four new public art installations by artists Patrick Renner + Flying Carpet (Houston), Jessica Stockholder (Chicago), and YesYesNo (New York), along with artwork by four artists that will rotate on the Main Street Marquee, a billboard at the corner of Main and Walker, and the restoration of Houston-based artist Floyd Newsum’s Planter and Stems between Lamar and Dallas.

Probably the most familiar name on the artist list is Patrick Renner, who many Houstonians know from his colorful Funnel Tunnel that graced the median of Montrose from 2013 – 2015, and the community-inclusive events such as painting parties that have accompanied the creation of his public work. For Art Blocks, Renner is taking his work to a new level with the vertical installation Trumpet Flower, to be completed in a recessed area between One City Centre and its garage on the 1000 block of Main Street. Similar to Funnel Tunnel, Trumpet Flower uses strips of wood painted by the public during a painting party that was held on Jan. 30th this year. Unlike Funnel Tunnel, the vertical configuration of Trumpet Flower has required some serious engineering, with both gravity and wind velocity creating new challenges for the design. To cope with this, Renner has partnered with Flying Carpet, a company run by Nick Moser and Kelly O’Brien that specializes in the design, fabrication and installation of large-scale creative projects. 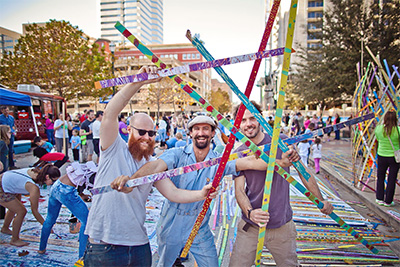 An inverted trumpet flower that opens downward into the area between the surrounding buildings to create a canopy inspires the shape of Renner’s installation. Renner and Moser say that they “hope for the element of surprise for those who haven’t seen the form before, as something unexpected in the urban landscape. Hopefully, there will be a continued relationship where they come to expect it to be there and incorporate it into their day-to-day activity. Perhaps they [will] have their morning coffee or catch some shade during a phone call [as either] would be a great use for the space.”

Another installation that will definitely take people by surprise is the immersive Color Jam by Stockholder. She is well known for her multimedia and genre-bending installations and has work in the collections of the British Museum (London), the Corcoran Gallery of Art (Washington, DC), the Middelheim Sculpture Museum (Antwerp) and the Whitney Museum of American Art (New York) among others. For this installation, swatches of vinyl and paint cover the intersection of Main and McKinney and use the street, buildings, and every inanimate object in-between as a public canvas. Sections of color crawl up the Metro platform, street lamps and walls, and continue out into the street itself allowing the viewer to walk through and be enveloped by the installation.

Stockholder specifically selects colors in response to the location and light she finds on site. Here, the stonework in the street and the local colors of the area were integral to her choices. Stockholder states that the fact that “the work spans an intersection and pieces of real estate that fall under different codes and ownership is central. The work addresses people on foot, in moving vehicles, and from above in buildings. In many ways, literally and metaphorically, it is about point of view.” One of the challenges Stockholder faces with work such as this involves getting permission from the various public and private entities that own the pieces of her visual puzzle, which seems to add a touch of community effort and involvement in the final iteration of her design.

One of the more subtle projects in Art Blocks Houston is the Main Street Marquee. The marquee will begin by featuring the work of Jamal Cyrus (March–June), followed by Nataliya Scheib (July–Sept.), Armando Castelan (Oct.–Dec) and finishing with M. Giovanni Valderas (Jan.–March, 2017). Art Blocks and Weingarten Art Group chose each of these artists from a pool of over 100 applicants, who submitted their work during an open call. 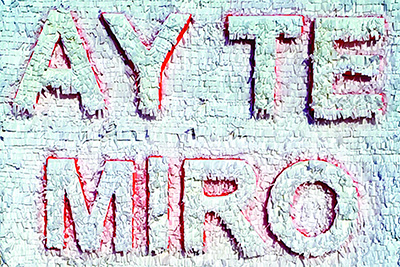 Valderas’s work Saludos has the unique opportunity for his work to be on display during the Super Bowl. Valderas is based in Dallas, Texas and comes from Guatemalan, Mexican, and American ancestry. Cultural identity is a frequent subject of his work. Saludos features an image of a common phrase used in the Hispanic community, “ay te miro” (see you later) spelled out on a bed of piñata fringe, a fitting message for the end of the Art Blocks Main Street Square project. “With a population of 43% of Latinos living in Houston (38% living in Texas), I strongly believe having artwork that reflects our community is important,” says Valderas. “The fringe element derives from the iconic piñata, a largely recognizable cultural symbol associated with birthday celebrations. What intrigues me about appropriating the fringe element is that it’s something everyone can easily identify… I chose ‘ay te miro,’ a slang vernacular used by everyday Spanish speakers, because it can fail literal translations and acts as a metaphor for society’s misunderstanding of cultures deemed as foreign. Furthermore, it’s never goodbye, it’s I’ll see you later; there is a cyclical hope attached to the phrase.”

Finally, collective group YesYesNo will take over the windows of the former Sakowitz department store at 1111 Main Street with an interactive installation called más que la cara (more than the face). This will be one of the most intriguing projects to see realized as the group will use facial recognition software to read the emotion of passersby and investigate the intersection of masks, technology, and public play. The group wants to engage their audience with “moments of magic and delight” while exploring how geometry can be connected to faces. YesYesNo likes the idea of using facial recognition software for this project and subverting it from something that can be sinister into something artistic, fun, and interactive.

All of the installations in Art Blocks Houston will close in March of 2017, but if deemed successful, there is a potential opportunity for the Downtown District to expand the project with later iterations in other sections of downtown Houston. Bob Eury, the executive director of the Downtown District, notes that “with tens of thousands of visitors, workers and residents passing through Main Street Square on a daily basis, [the Art Blocks] project and its related programming has the potential to affect a real transformation along an underutilized corridor and create welcoming spaces for the enjoyment of Houstonians and visitors alike.”