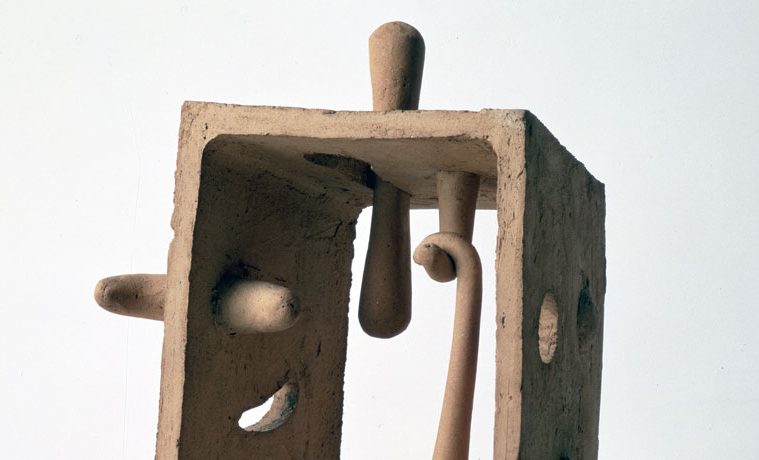 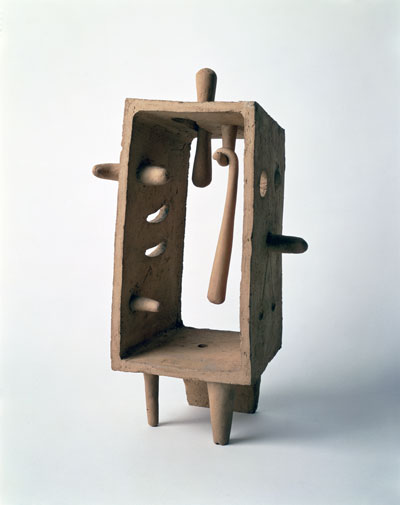 An exhibition at the Nasher Sculpture Center dedicated to experiments in ceramics by artists usually associated with other media offers a unique view of artistic production in the 20-year period beginning in the middle of the Second World War. Organized by chief curator Jed Morse, Return to Earth: Ceramic Sculpture of Fontana, Melotti, Miró, Noguchi, and Picasso, 1943-1963 contends that these artists used ceramic techniques in “radical ways, often challenging traditional western boundaries between sculpture and ceramics.”

Return to Earth succeeds by showing how the artists grappled with translating their specific aesthetic sensibilities into a medium usually associated with arts and crafts.  It also offers insight into how a time of rapid historical change and political upheaval is captured or reflected by its art.

Comprised of more than 75 works and divided into two sections, the exhibition takes up the central gallery space of the museum on the first floor and the small lower-level gallery. The best pieces are clearly by the Japanese-American Isamu Noguchi, who’s represented by work made in Japan between 1950 and 1952.

For Noguchi, working in ceramics was a way to engage with his Japanese heritage by combining eastern materials and methods with his surrealist abstractions. This is evident in the fascinating My Mu (1950), a small abstract sculpture whose three legs, one bent inward, support an oval shaped enclosure with a hole in each of the upper and lower sections of the rolled shell.  The title refers to the metaphysical notion of “emptiness” in Shinto, and the piece represents a memorial to Noguchi’s departed father.

On a formal level, the execution of the piece conveys mystery and a precarious balance from the odd placement of the parts and the shadows created by light as it passes through the holes, a perfect engagement of material with the psychological anxiety that was Surrealism.

Joan Miró takes the northern light; his works nicely engage in a dialogue with his bronze Oiseau Lunaire (1966) just beyond the window in the sculpture garden.  Two of his works stand out for their sense of texture and for how he retains his signature style within the ceramic process.  In Monument (1956), a square base with rounded legs supports an odd, columnar, dark figure, about 20 inches tall.  A birdlike figure at the top has shapes attached that resemble several Miró motifs such as women, the sun, a moon, stars, flight, and fire.  Gone are the finished, polished surfaces typical of Miró’s general body of work, in exchange for texture and a pitted surface that takes on an art brut style popularized in post-war France.

This piece was meant to stand on its own, unlike Maquette de l’Arc a la Fondation Maeght (1963), a model that was ultimately realized in full size.  This piece, an arc in ceramic bone hues with several Miró spikes, tendrils, and hooks, has an exquisitely pitted and irregular surface.  The finish here is reminiscent of art informel, an artistic style characterized by texture and mixed media in painting during the same period. 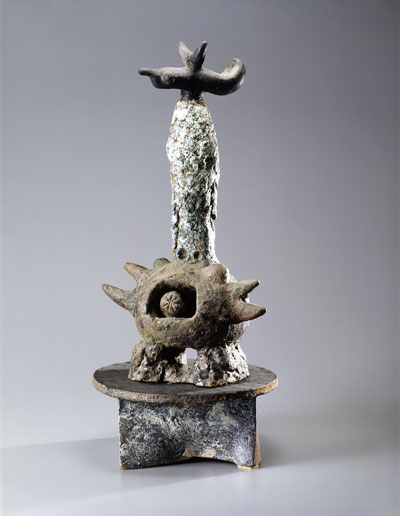 For Picasso, who joined the communist party in 1946, ceramics where a way to meld art with life in a populist format to reach common people.  Most of the pieces were intended for mass production and everyday use, such as cups, pitchers, and plates.  A perfect example of the decorative and accessible aspect of the work can be seen in Three Fish in Relief or Fish on a Sheet of Newsprint (both 1957), where the titles refer to the elements in the modest sized hand painted ceramic pieces with green, yellow, and blue accents. Picasso’s avant-garde cubism is put to the service of utilitarian objects with humble intentions. His dealers despised this because the prices were too low. It mattered little to Picasso, who donated the proceeds to the party or to other worthy causes.

Italian sculptors Fausto Melotti and Lucio Fontana (born in Argentina) split the downstairs gallery.  Both emphasize clay’s tactile properties. Fontana was trained as a sculptor and later found fame as a painter and an inspiration to the Italian Arte Povera artists.  Most of his pieces from the 40s on are named Spatial Concept, adapted from his theory of “spatialization.” Fontana aimed to uncover a depth in the traditionally flat surface of painting so as to reveal an inner space. For Fontana, this space represented the cosmos or infinity, if not a very pointed critique of western painting.  Two wonderful examples in terracotta from 1959 resemble his first spatial-concept monochrome paintings with the signature vertical cut in the center of the canvas.

It’s not clear why the Nasher buried all the work by Melotti and Fontana on the lower level, or, for that matter, arranged each artist’s work in isolation from the others.  That approach may help viewers keep track of what they are seeing and the particular style of each artist, but it deprives them of the chance to see Fontana’s work interact with Noguchi’s and Miró’s, to name one possible configuration.

Then again, Return to Earth is the first exhibition of its kind. Hopefully future shows that build on Morse’s scholarly investigation of the kneading of the avant-garde and ceramics won’t keep the artists separated.