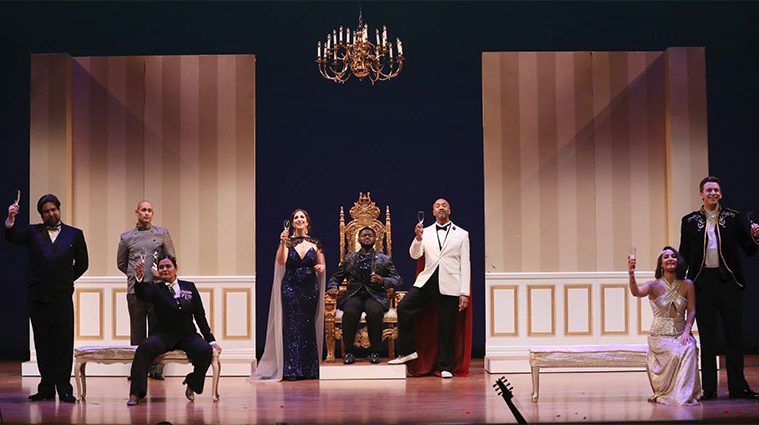 When Matthew Dirst was a graduate student in France, a splashy revival of a long-neglected 17th-century opera galvanized his love of baroque music. Twenty years after Dirst founded Ars Lyrica Houston to spotlight Baroque gems, he and his ensemble finally moved into the realm that caught Dirst’s eye back then: They presented their first fully staged opera.

Ars Lyrica’s production George Frideric Handel’s Agrippina may not have matched the luxury of that 1987 staging of Jean-Baptiste Lully’s Atys, which you can watch on YouTube if you’re curious. But Ars Lyrica’s Agrippina nevertheless offered a lively journey into a corner of the opera world–the baroque repertoire–that’s mostly terra incognita to today’s audiences. 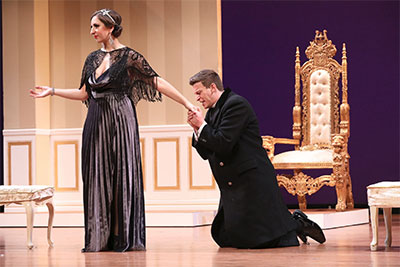 Agrippina, set in ancient Rome, unleashes a battle between two strong-willed women. The title character, a Roman noblewoman, revels in pursuing plots that she hopes will redouble her power. Her rival, Poppea, is a jewelry-loving material girl who nearly gets tricked by one of Agrippina’s conspiracies. But she catches on and fights back with deceits of her own. Meanwhile, others get caught in the crossfire–especially Poppea’s sweetheart, Ottone, the only honest and good-hearted character in the lot.

The story’s twists and turns drive the score’s vocal pyrotechnics. Handel’s music, by and large, unfolds as a string of solo arias. Each of the principals has multiple vehicles for showing off virtuosity, finesse, pathos or fire.

So Agrippina gives modern audiences plenty to hang onto. At one point, the title character declares: “All praise to him who deceives in order to reign.” Does that sentiment sound familiar?

Centering as it does on schemes and lies, Agrippina has a satirical, comic streak. Stage director Tara Faircloth played that up in Ars Lyrica’s production, which was performed on  Nov. 16 and 18 in Zilkha Hall.

Two courtiers sucked into Agrippina’s plots, Pallante and Narciso, all but fell over themselves in their fawning. A servant scrambled around in a near-constant tizzy. When the scheming almost obliterated the romance between Poppea and Ottone, each of them took solace in wine, and a tipsy reunion resulted.

But Faircloth lets seriousness emerge. Though the emperor Claudio strutted and preened like a full-of-himself swain when he tried to woo Poppea, he gained dignity as the time came for him to put the kibosh on the two rivals’ plots. When the story’s upheavals thrust Agrippina and Ottone each into soul-searching–two of the opera’s most powerful scenes–the stillness kept the focus on the characters and their emotions. 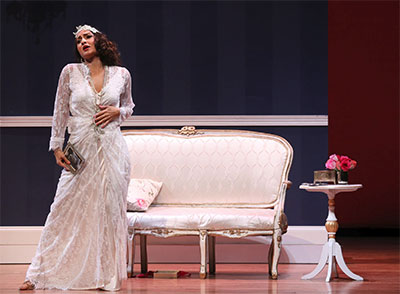 Agrippina didn’t really have a set in the typical sense. Instead, the scene-setting came via furnishings–from chandeliers to a throne to two segments of wall that rolled on- and offstage as needed. They established a certain amount of royal-court glitz, but more of that came from Macy Lyne’s costumes–especially Agrippina’s and Poppea’s gowns, which harkened back to Art Deco-era swankiness.

But the story really came to life thanks to the principals, who sang and acted with equal commitment.

Sofia Selowsky, who was a spunky Rosina last season in Houston Grand Opera’s The Barber of Seville, brought Agrippina’s arias a flair and full-throatedness that captured all the scheme-queen’s wiliness. The dramatic contrasts Selowsky gave Agrippina’s biggest aria were still more compelling.

Camille Ortiz’s Poppea had less vocal heft, but her sparkle and deftness brought her music the magnetism of a woman who savors her power over men. As Poppea’s sweetheart, Ottone, countertenor Aryeh Nussbaum Cohen sang with warmth, grace and expressiveness that suited the opera’s only admirable character. And in Ottone’s lament at the opera’s midpoint, Cohen veered between outcries and hushed, haunting lyricism, creating the performance’s most electrifying scene.

Countertenor John Holiday brought agility and brilliant tone to the role of Nerone, Agrippina’s son, but the brightness served some moments better than others. Timothy Jones brought resonance and vigor to Claudio’s arias. And Brian Shircliffe and Cecilia Duarte sang vivaciously as the courtiers Pallante and Narciso.

Dirst, directing Ars Lyrica’s period-instrument ensemble from a harpsichord at the center of the pit, emphasized Handel’s drive and buoyancy. But when the singers brought lyricism to the fore, the orchestra supplied a limpid and expressive accompaniment. Dirst and the group played their own role in the story.