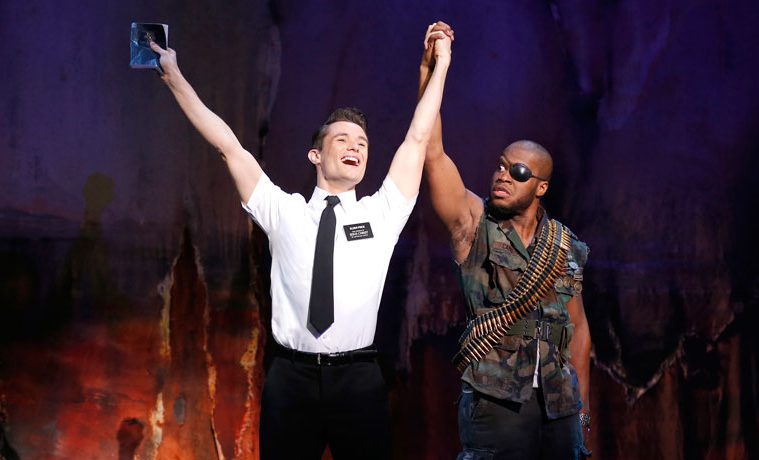 IMAGE:  Mark Evans and Derrick Williams in the touring production of The Book of Mormon. Photo by Joan Marcus, courtesy of AT&T Performing Arts Center, Dallas.

The Book of Mormon is the most over-hyped Broadway musical of the last decade. But no doubt you’ll still be laughing about it to your friends long after the touring musical leaves Texas. The national tour has taken up temporary residency in the state, playing to enthusiastic audiences first in Dallas, now Houston before moving to San Antonio (Sept. 17-29 at Majestic Theatre) and Austin (Oct. 1-13 at Bass Concert Hall).

Critics immediately hailed the comedy-musical when it opened in New York in 2011, and the show went on to sweep at the Tony Awards. Created by the South Park duo of Trey Parker and Matt Stone (with an assist from Avenue Q co-composer/co-lyricist Robert Lopez), the show lampoons organized religion and traditional musical theater, reflecting the creators’ lifelong fascination with Mormonism and musicals, adhering to the old-school theater conventions of campiness and phony moral uplift. Of course, it would not be the hit it is without mixing in a fair amount of vulgarity, racism and crass silliness. It’s a satire aimed for the reality-television crowd, with nary of moment of wit or truth in any of it. Still, audiences are laughing it up in record numbers.

In a sardonic twist, it seems the Mormon Church is having the last laugh. Elders from the church have paid for full-page ads in the tour program. One assumes the old adage “any publicity is good publicity” even extends to a story that finds humor in raping babies and female genital mutilation, among other atrocities.

Still, the show has its moments. The story of two clean-cut Mormon missionaries sent to poverty-stricken Uganda, The Book of Mormons has a professional gloss that usually evaporates once big shows hit the tour circuit. The dancing is precise and imaginatively choreographed, the lighting heightens the garishness of the proceedings, and there are several clever theatrical tricks that are pulled-off with ease including a funny bit of stage business that involves clapping to make the entire stage lights go on and off. Nor can you really fault the actors, especially Christopher John O’Neill who stars as Elder Cunningham, our nerdy hero who mixes in references to pop culture (think Yoda from Star Wars and Mr. Spock from Star Trek) as a cover for his lack of understanding of true Mormonism.

The premise of the show is that religion is just the continuation of showbiz by other means, and some would find that hard to argue. So why is the show a let-down?

Musically, it lacks verve. The songs play like jingles or pitchy punch lines despite the slick arrangements. One certainly doesn’t leave the theater humming any of the lyrics; they are all instantly forgettable. Plot wise, well, it’s a one-joke premise. Actors hit their cues and spill out outrageous dialogue, but no bother is given to any character development or deep understanding to motivation.

So why all the hype? For all its presumptuous dialogue, the writers really fail to take any risks. Nothing can be deemed controversial or even thought provoking, as the proceedings are too far over-the-top. Why not attack other religions? Is it safer to mock Mormons? Or is it just that easy to entertain the gullible? The Book of Mormon is a funny and commercially viable crowd-pleaser. But it is not the best theater.