REVIEW: Contesting Modernity: Informalism in Venezuela, 1955-1975 at the MFAH 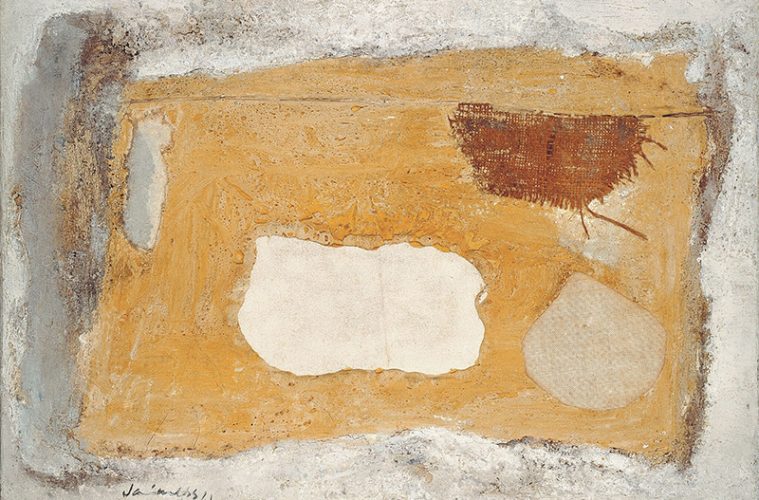 Listed by ArtNews as one of the most promising museum shows in the world this fall, Contesting Modernity: Informalism in Venezuela, 1955-1975 at The Museum of Fine Arts, Houston (through Jan. 21) takes a movement organized around chaos and tries to make sense of it.

Before entering the exhibition, the viewer finds a video of Caracas, the camera floating over super-blocks of beautiful apartment buildings designed by Carlos Villanueva and streets crowded with pedestrians jostling alongside the newest cars. The video could be a tourism promotional for the capital-M Modern city at its finest. But the video sits just outside the exhibition, near the ticket counter and amidst one of the busiest areas of the museum. Its sound is drowned out by the chatter of visitors, the happy ruckus of children bouncing around the lobby. It’s a perfect metaphor: the clean lines and Modernist dreams of a city of the future can no longer be heard, are crowded out with the density of wildly divergent experiences. That Modernist dream is both beautiful and completely incomplete. Here, in Contesting Modernity, we find artists embracing messiness and fragmentation, challenging what the modern project might include and what its repercussions have been. 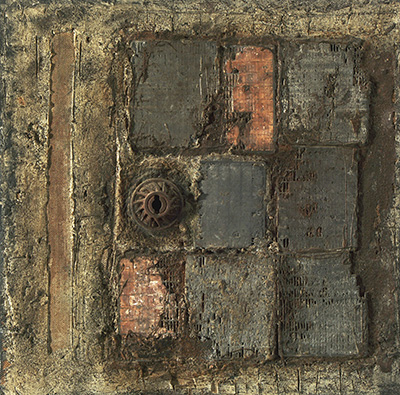 In five sections, Contesting Modernity surveys twenty years of work in Venezuela by numerous artists, some of whom a Houston audience will already know from curator Mari Carmen Ramírez’s extensive catalog of groundbreaking, research-driven exhibitions at the MFAH. The sections each merit an exhibition of their own, and many could be divided into numerous sub-sections. Indeed, the scope of the exhibition makes its organization a daunting task and even after multiple visits (and almost 20 years of studying Latin American art), I am left feeling like I’ve just barely scratched the surface.

The exhibition begins with Surface Tension, a look at the dissolution of the formal qualities of painting to emphasize texture and material. Like many of the simultaneous movements of abstraction around the world, Informalism embraced gesture and the dissolve.

“Using the surface of the canvas as their battleground,” the wall text notes, “they focused on the disintegration of form, the degradation of traditional media and techniques, and physical intervention.” Some artists did this through using unexpected materials (sand, plaster, straw, found objects); others used “violent color”; while still others looked to light and shadow “to dissolve the stability of the pictorial surface.”

Humberto Jaimes Sánchez’s untitled 1961 canvas, for example, uses oil, mineral pigments, gesso and textile to build up a pocked skin over the canvas, a warm yellow relief broken by irregular holes and the insertion of a brown weave in one corner. The form is uncomfortable in its physicality, even as it remains a two-dimensional abstraction on canvas.

A modest white Carlos Cruz-Diez from 1961 might be missed by a visitor moving quickly: a rare historical piece, its simple wooden construction elegantly signals the artist’s longstanding investigations of light and form.

Gerd Leufert’s series of three almost monochrome paintings from the same year are startlingly beautiful, their range of white tonal gradations a series of sensitive meditations on change. Subtly textured surfaces wander across the shades of white, intruding gently to predict the variations that emerge on the canvas’s surface as light moves across it. These are some of the most intimate and emotionally fragile paintings I’ve seen in years.

And that is only a cursory glance at the first section of the exhibition. 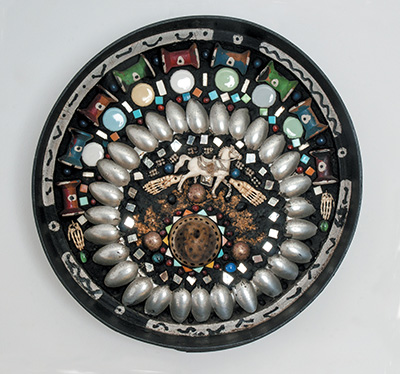 In the second section, El Techo de la Ballena, we find archival ephemera—manifestoes, postcards, photographs, little magazines, prints, and film—alongside mixed media, collage, sculpture, and drawings by artists in the radical avant-garde group of the same name (The Roof of the Whale). Formed in 1961, the group included artists who were critical of political conditions and artistic conventions in Venezuela. Experimenting with found materials and with “sordid” subject matter, the group called out the inequalities wrought by (or at least tacitly condoned by) Modernism and its far-reaching tentacles.

The section Return of the “Real” includes works that incorporated trash and everyday objects into their construction. For visitors who know Cruz-Diez’s work with light and color (see the MFAH exhibition Carlos Cruz-Diez: Color in Space and Time, 2011) or who remember Soto’s The Houston Penetrable from 2014, this section demonstrates the artists’ wide range of interests and methods of working. Return also includes important work by Alejandro Otero: these tres grandes of Venezuela should be household names in Houston by now.

In a rather discombobulating shift, the fourth section of the exhibition is dedicated to a single artist, Elsa Gramcko (1925-1994). Looking to machines and totemic structures in her early work, the self-taught artist also made a body of work marked by its textured surface reliefs. Informed by her extensive study of Carl Jung, Gramcko developed an esoteric artistic and life philosophy.

As Ramírez writes, “Gramcko’s embrace of the metaphysical dimension of ‘things’ allowed her to delve deeper into the signifying potential of ordinary objects such as batteries and other mechanical gear, thereby producing unexpected results. What is at stake in each case is the transmutation of dead mechanical matter into a sentient or vital structure charged with intuitive, emotional, or poetic content.”

Gramcko’s Diálogo con la nada (Dialogue with Nothingness, 1978) is a simple wooden construction with rusted nails that appears to be made from found parts. It might be the clarion call of the Informalists: confronting not only the traditions of modernity, but also the annihilation exacted by World War II, these artists sought to escape the nothingness that defined their cultural moment. Using simple everyday objects, then, became a real-world response, a grounding impulse against the void. Seen here, though, Gramcko’s complicated body of work feels squeezed in, rather than thoroughly unpacked: I’m waiting now for the Gramcko retrospective that we need and she deserves. 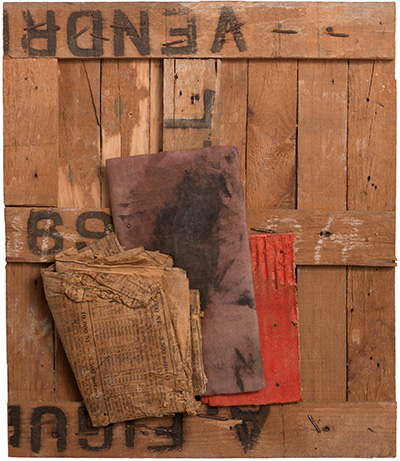 The exhibition’s final section, Marginal Strategies, is divided in two. Work marked by distorted figures and political satire is paired with Mario Abreu’s fantastical assemblages and Tecla Tofano’s suggestive ceramic sculptures. A second part of this section is a room dedicated to the 1967 multimedia project Imagen de Caracas (Image of Caracas), never before seen in the U.S. Made by artists Jacobo Borges and Josefina Jordan, writer Adriano González León, and architect Juan Pedro Posani for the 400th anniversary of the founding of Caracas, the exhibition includes documentary footage and photographs that chart the violent history of the city and, more broadly, of the country since the colonial period. It’s a harsh indictment of nationalism in a place—like most—marked by moments of unbelievable and too-often unspoken brutality. Showing just this room would be a major coup for a museum. Showing it alongside such an extensive and in-depth collection of work is nothing short of a revelation.

Informalism “sees chaos as the element that best expresses our period,” writes Ángel Luque in 1962, and perhaps a show about chaos can never be entirely coherent. In its effort to organize and teach, the exhibition feels overwhelming and at times heavy-handed. But when it allows unpredictability and surprise—when it loosens its grip on convincing us of the importance of this historical avant-garde community of artists—it captures glimmers of what the Informalists were initially proposing, and this is where its brilliance lies.

Contesting Modernity is a remarkable feat and its small failings signal our bigger failings as an arts community: this kind of exhibition, in which we revisit a moment of history not familiar to most U.S. audiences, needs support from its institution and viewers, so it can be broken into more approachable pieces, regularly programmed and widely discussed, not just by a specialist community. This exhibition could be six; its catalog could be twelve books instead of one. Here, though, it appears to fill the Latin American slot in a large institution’s calendar: a puny fate for an ambitious, world-class project. Perhaps in the museum’s new building, these exhibitions will find more consistent support and visibility.

In one of their manifestoes, El Techo de la Ballena writes: “In our view, we are at risk of being asphyxiated, because museums, schools, and cultural institutions are robbing us of our meager supply of ozone in exchange for rarefied but putrid air. The whale wants to renew the atmosphere.” What makes this exhibition so necessary is that this 1960s-era manifesto is still a call to arms for us and for our institutions.

Contesting Modernity is a dense and meaty show, important not simply because it fills a hole in our knowledge of art history, but—much more so—because of what its artists propose about breaking rules, challenging power structures, and pushing against norms. This is an exhibition that requires slow and careful, repeated viewings.

This show puts Houston—once again—on the map as a site for important new research and groundbreaking curatorial work. It takes its audience seriously, offering challenging work and a significant new take on the legacies and counter-legacies of Modernism. It might not be the most easily digestible museum visit, but it is absolutely a necessary one.