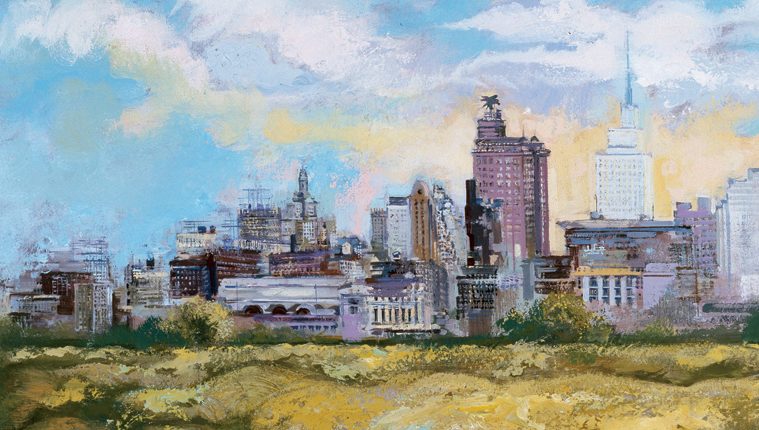 Flower of the Prairie: George Grosz in Dallas
Dallas Museum of Art
May 20–August 19, 2012

A Berlin Dadaist is invited to Dallas by a department store executive.… Sounds like a set up for a joke, no? It happened in 1952. Leon Harris, Jr., the vice president of the Dallas department store A. Harris & Company, offered German painter George Grosz a major commission to commemorate the store’s 65th anniversary. Grosz arrived in Dallas in May 1952 and spent four days observing and digesting sketches of the people and mores of the city. Focusing the subsequent four months of time in his studio back in New York on Dallas, Grosz created a small body of paintings and watercolors capturing his impressions of the city. In October 1952, the work was exhibited at the Dallas Museum of Fine Arts located in Fair Park. The current exhibition, Flower of the Prairie: George Grosz in Dallas, gathers the same work not to recapitulate that exhibition some 60 years ago, but rather to tell us with superb aplomb about the city of Dallas in the mid-20th century as seen through the decidedly fresh eyes of a Berlin Dadaist.

Before coming to the United States, Grosz made his name as a caustic critic of the Weimar Republic and its misuse of power. He was a painter of the Neue Sachlichkeit, or New Objectivity, a group of painters who brought an empirical, objective, if not raw eye to the dysfunction and corruption of Germany in the interwar period. While he moved his family to the United States in 1933, he continued making images critical of the regime based on news.

There is very little sense of cutting Dadaist criticism at work in the four paintings and 17 watercolors Grosz made about Dallas. The work is, instead, imbued with a sense of bedazzlement and awe. Grosz the Western European came to Dallas with preconceptions of a barely touched wilderness on the plains, cowboys and Indians, and a small town on the frontier. To his surprise, he was greeted by the Emerald City, a rising modern metropolis with urban-frontier types wandering its downtown cityscape.

Grosz experienced the city from afar as a steel and glass wonder rising from the horizon and from within as a teeming urban mass. Having seen the city from bluff across the Trinity River, Grosz painted “Flower of the Prairie” in which the city’s skyline, dotted by rising skyscrapers, is a hot blue swirl at the center of a field of saturated yellow. “In Front of the Hotel” shows a small taxonomy of Dallas captured in front of the Adolphus, where Grosz stayed: a prim yet curvy woman, the hayseed, the cowboy on the make, and the backside of an African American hoisting newspapers onto his back. If there is one place where the Dadaist penchant for harsh critique begins to be felt it is there, in Grosz’s few depictions of Black Dallas. “Old Negro Shacks” is a soft but telling watercolor of three tumbledown wood-frame houses. An African American man and little girl stand at the far right about to cross the worn and broken macadam that is the street.  Another watercolor, “A Glimpse into the Negro Section of Dallas,” shows the bustling retail side of Black Dallas in a crowded view from above onto a street in Deep Ellum.

Flower of the Prairie: George Grosz in Dallas is a triumph. Curator Heather MacDonald has taken a body of Grosz’s work, paintings and watercolors that are otherwise aberrant within his greater life production as an artist, and situated them in the rich urban fabric of Dallas — its history and unique modernist sensibility circa 1952.