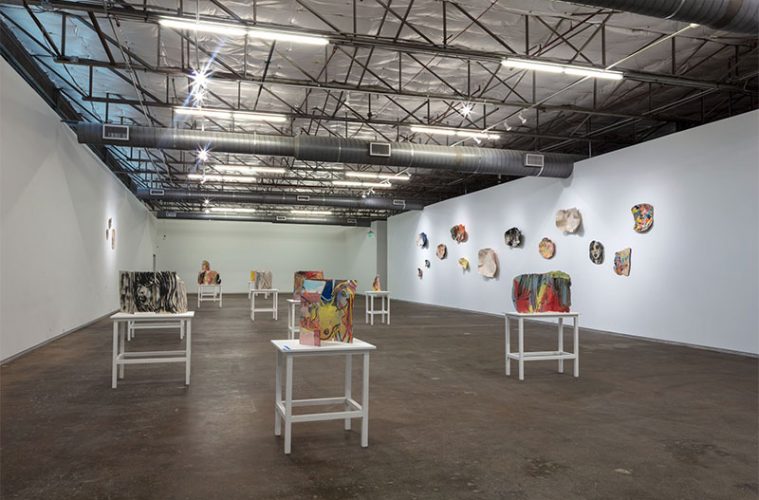 Fingers hover over lips and breasts, hair cascades over and around faces, kisses are blown and shared, pleasure is given and received: Ghada Amer’s ceramic sculptures shiver with ecstatic encounter. Ceramics, Knots, Thoughts, Scraps at Dallas Contemporary (through Dec. 17) is Amer’s first exhibition devoted solely to her ceramic work, and in it we find the artist’s fierce proposition splayed across a room of clay slabs: what would it be like to live in a world in which female pleasure was seen as beautiful?

Amer describes herself as a painter, and she is perhaps best known for embroidered canvases, though her multidisciplinary work includes painting, sculpture, illustration, performance, garden design, and installation. Born in Egypt, she studied in France before moving to New York in the 1990s. This exhibition is a return to Texas for the artist: her second solo exhibition in the U.S. was at the Contemporary Arts Museum Houston in 2000, curated by Valerie Cassel-Oliver. 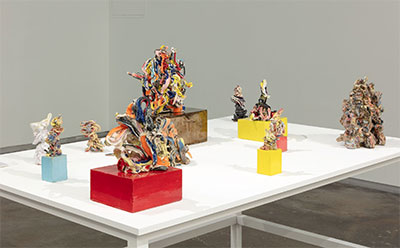 Last year, during a residency at Greenwich House Pottery, Amer began making freestanding sculptures in clay. She brushes porcelain over the clay slabs, then paints them with colored slip. The resulting objects stand around 20 to 24 inches high, and 30 to 34 inches wide, and are best seen in the round. They stand on pedestals, inviting the viewer to move around their zig-zagging forms to find images of women’s bodies unfolding across their surfaces. The figures mostly recline or lie on their bellies, their bodies covered in colors that match the exuberance of their sex. Amer has described them as ceramic paintings, and they take on the art historical convention of the odalisque. Here female bodies throb and shimmer across every surface, but here they are also painted by a woman. It’s a simple inversion of the gaze, but still significantly disorienting.

Ceramics, Knots, Thoughts, Scraps also includes platter-like sculptures, hung high on the wall, and a series of tables with her abstract objects, which she calls Knots, Thoughts, and Scraps. These kneaded balls and blobs of clay are titled as studies of color (Study in Silver Luster, for example), or as references to other artists (Homage a Chamberlain). Many of the portraits of women in suggestive poses are also titled as color studies: Sculpture in Black, Red, and White is a slab with two images of women on either side of it. Red, Black, and Gold Sculpture is a slab with two portraits of women’s faces shown in close up, the monochrome of the paint dripping down in long streams. What is so prominent in the exhibition—the female body and its pleasure—is nowhere named. Notably, in the exhibition title these works fall under the ambiguous Ceramics. And, perhaps that is fitting. 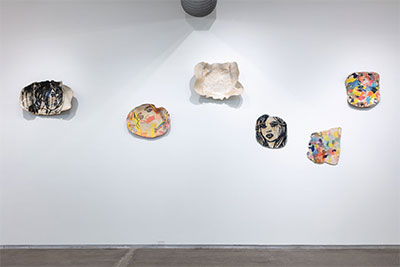 Sourcing her images from pornography (still made almost exclusively by a male gaze, and for male pleasure) Amer places these images on clay, embracing a material too-often considered “only” utilitarian or decorative. The material, then, meets its subject, sharing the cultural shame we place upon both.

Writing about Amer’s show at Cheim & Reid in May, Seph Rodney suggests that Amer’s proposal might be impossible to meet, at least for now. In order to make the world Amer imagines, Rodney writes, “I suspect we need to grow toward the place where neither desire nor the body are imagined to be that which needs to be discarded.” 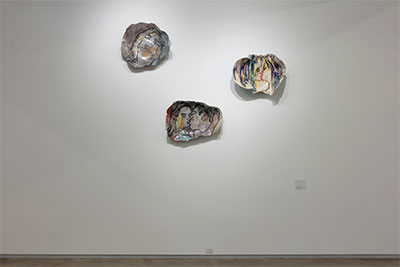