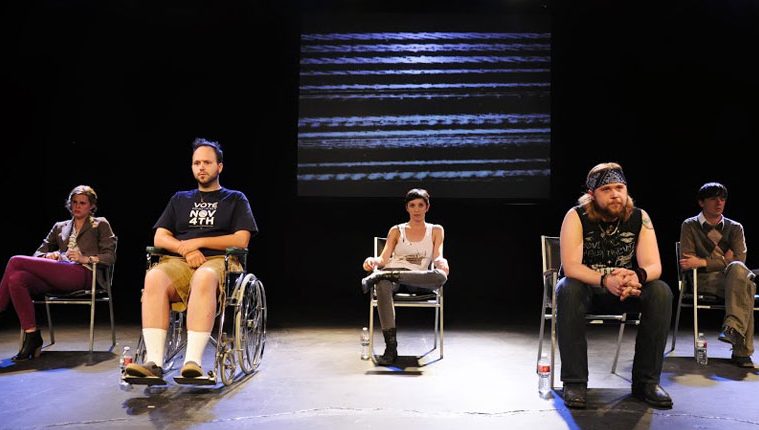 Review: Holier Than Thou 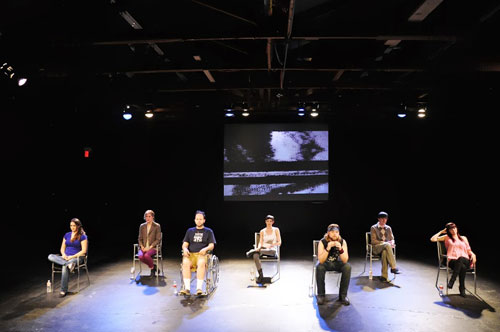 Poison Apple Initiative’s new work, Holier Than Thou, is a three-part investigation into reality television and its demoralizing qualities, written by Bastion Carboni and directed by Bethany Perkins. Far removed from the idyllic simplicity of The Bachelor, the contestants are competing for a chance to assume the super powers of the show’s host, Jesus Christ. Of course, Jesus has changed quite a bit in the past few years. These days, he goes by Josh, and has the demeanor of a middle school guidance counselor.

The work begins with a prologue of the rejected contestant audition videos. Each applicant details why they should be selected for the competition and what they would do with Christ’s powers. Answers range from eliminating racism by whitewashing the population, subverting the ‘bortionists by birthing adults instead of babies and ending human trafficking with a party bus. Bastion and Perkins highlight the utter ignorance that underlies altruistic tendencies. However, the video segment drags on for too long, reinforcing the same theme.

We then proceed to Act II, the true meat of the play. Holier Than Thou is set simply with staggered chairs on an empty stage. Each contestant is seated and gazing at the audience for the entirety of the play, resulting in a well calculated discomfort. The minimal set design is complimented by the text itself.

Reminiscent of Mickle Maher’s Spirits to Enforce, the plot unfolds via distributed story telling. That is, events are recounted in a barrage of varying commentary from varying perspectives. Moreover, most of the action takes place in the imagination of the listener, free from constraints of practicality. In one instance, the contestants are tasked with assembling a corpse in a scavenger hunt. As one can imagine, hilarity and horror ensue as the neurotic Seth (Zac Carr) tries desperately to breath his way through a panic attack locked inside a dumpster and the yuppie Charlotte (Jordan Cooper) mistakes the homeless for undercover camera men. Description trumps depiction as Dylan (Kacy Todd) recounts the miracles of the victorious Lila (Melanie Conrad) in which rare amazonian  herbs are discovered just in time for breakthrough medicinal interventions and the sky fills with aurora borealis after the inevitable crucifixion of Lila Christ 2.0. 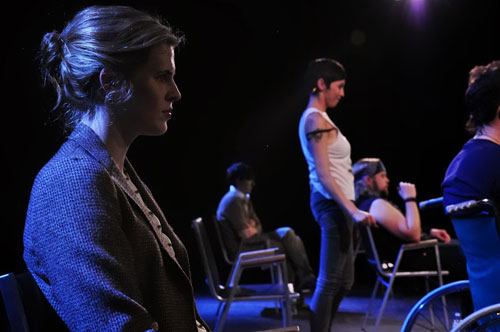 Distributed story telling has its drawbacks in that little movement actually occurs on stage. For the majority of the performance everyone is seated, delivering commentary in the reality-tv side interview style. However, the work is peppered with brief instances of motion. Occasionally, the actors stand, breaking the interview schema, and interact. Said interactions are almost always the typical television confrontations induced by underfeeding and over boozing of the cast such that malnourished contestants can’t help but devolve into Lord of the Flies. In one moment, Charlotte (Jordan Cooper) alternates modes from active confrontation to reserved commentary so rapidly that her cool demeanor is imbibed with the violent potential to a nauseating effect. Such clashes loosen  the grip of caricature, revealing the very flawed humans underneath.

Perhaps most moving of all is the inevitable breakdown of Basil (Austin Alexander), a Macho-Man Randy Savage type, when another contestant uses his own weapon against him. It’s impossible to not melt when a Thor look alike weeps over his mother.

After a brief beverage break, the evening concluded with three lectures dissecting the role of reality television in contemporary society. Matt Korn, a student of anthropology at University of Texas working on his dissertation, spoke about Ru Paul’s drag race. His well-organized lecture detailed the show’s simultaneous promotion and limitation of the drag identity. Indeed, drag queens may have become increasingly mainstream, but, according to Korn, we should ask ourselves if this comes at a cost to the drag kings or the myriad of other related identities. Next, Brennan Gallagher delivered a well intentioned, but rambling indictment of reality television as the opiate of the masses. According to Gallagher, if we all stay inside and watch netflix documentaries we can rise above said malaise. 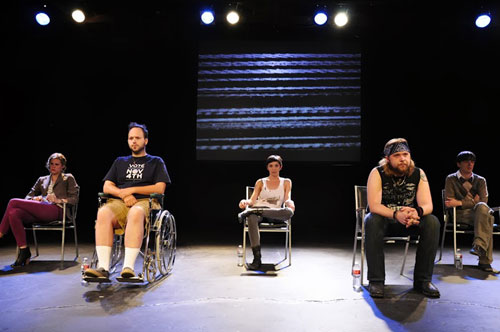 The evening concluded with Katelyn Watkins’ rebuttal in defense of reality television as a worthy subject of critical analysis. Watkins delved into the absurdity and symbolism of The Flavor of Love, a reality show in which women compete for the affections of Flavor Flave, musician and notable collector of neck-dangling clocks.

Watkins describes an absurd ritual on The Flavor of Love that is indicative of the overarching theme of the preceding play. When a contestant joins The Flavor of Love, Mr. Flave renames her with an absurd title. Rachel becomes butterball, or red clam, or toaster. That is, in order to achieve an absurd prize, personal identity must be shed  to overcome whatever absurd obstacles lie in the way. However, within Holier Than Thou, the prize is an ethical one, the ability to channel the divine to cure earthly illness. As such, the obstacles encountered slowly disassemble the moral compass to the point of cannibalism. Thus, Perkins and Carboni ask us whether our objects of worship are honestly in accordance with the prayers they demand.

—PHILLIP JOHN
Phillip John is an Austin-based writer and musician.