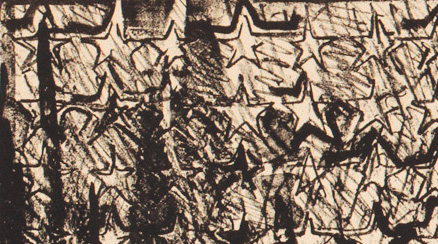 For some painters, printmaking is merely a means of reproducing their images so they can make them available to collectors who can’t afford their paintings. Not so Jasper Johns, whose endless experimentation has transformed his images of what he famously called “things the mind already knows” – flags, targets and maps, to name a few – into what he described, in a 1964 interview, as “a thing’s not being what it was, with its becoming something other than what it is, with any moment in which one identifies a thing precisely and with the slipping away of that moment, with at any moment seeing or saying and letting it go at that.”

Each of Johns’ three Two Flags prints – two lithographs, one heavily worked silkscreen – on view at Hiram Butler Gallery has that elusive quality. They keep what appealed to Johns about flags – a readymade, uniform composition – even as his restless, crackling line makes each flag start to become something else.

In the next room, Johns’ one-time lover, the late Robert Rauschenberg, anchors a satisfying group show called, simply, Prints. For some of the artists included, such as Fred Sandback, Sol LeWitt and James Turrell, printmaking feels incidental to their main body of work. But, Rauschenberg’s endless capacity for surprising juxtapositions and his seeming desire to bring as much of the world as possible into each picture find perfect expression in lithographs like Landmark (1968), which he made using images from Life magazine.

Other highlights include Agnes Martin’s meditative grids, which lend themselves perfectly to their 12-by-inch format here; a John Cage score printed on smoked paper, reiterating his embrace of chance; and an achingly beautiful smudgy gray Cy Twombly lithograph.