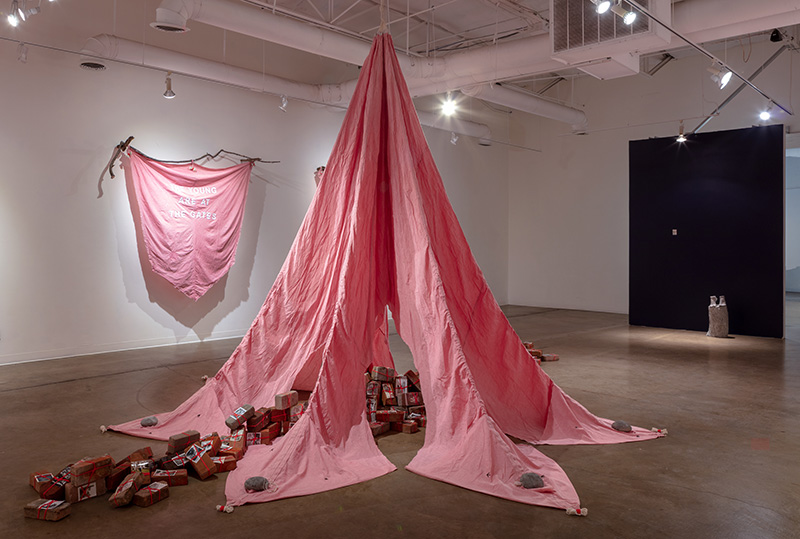 REVIEW: Margaret Meehan, Hope is the Thing with Feathers and Eric Zimmerman, A Few Things for the World’s End at Conduit Gallery

“We hate darkness and sleep and night and lie longing for the day to come. We long that the week should be all one day without divisions.

As you come around the entrance to Margaret Meehan’s Conduit Gallery exhibition, Hope is the Thing with Feathers (through Nov. 24), a concrete cast of a tree stump sits facing the pink parachute installation in the center of the room. The stump, titled Murmur, has two cast feet on it, both lifting up as if about to jump, heels in the air and arches straining toward the sky. The toes of both feet curve upward and off the edge. She is ready to either jump into the abyss, or to fly.

And, that is precisely where the tension of Meehan’s work holds you.

This is her first exhibition in Texas since relocating to Richmond, Virginia in 2017, and Meehan’s work remains as layered, complex, and beautiful as ever, but if anything, packed with a new urgency. Beyond Murmur, she has built a site-specific installation from a vintage military parachute, its hefty pinkness engulfing a toppled wall of bricks beneath it. On each brick, Meehan attaches a vintage photograph. Starting with images of caged birds, the photos then segue to images of women with birds–white women, women of color, women whose gender identity is fluid–and then birds flying free. The narrative, an intuitive chronology of women’s movements (their optimism, failures, and potentials all in one), unfolds in careful details, a trademark of Meehan’s installs, which always reward the viewer’s sustained and attentive looking.

Surrounding this impressive installation (titled Through a Window, Over a Wall), Meehan has hung hand-made banners of the same pink fabric. Embroidered with white bubble-letters, the banners take their texts from woman-led protest movements. “Anything You Can Do I Can Do Bleeding,” reads one; “Deeds Not Words,” reads another. Another cites suffragist Lavinia Dock, who wrote in 1917: “The old stiff minds must give way. The old selfish minds must go. Obstructive reactionaries must move on. The young are at the gates!”

And, directly behind Through a Window, facing the viewer when she enters: “White Supremacy is Terrorism.”

What is one to do, when the news of the week includes an unprecedented assassination attempt on 14 Democratic leaders and journalists, a mass shooting at a Pittsburgh synagogue, and the murder of two black people at a grocery store after the shooter failed to enter a black church in Kentucky?

In an especially perceptive pairing, Conduit has installed a series of new drawings by another recent Texas expat, Eric Zimmerman, in its Project Room. Titled A Few Things for the World’s End, Zimmerman’s 13 graphite drawings are a personal time capsule, a visual record of some of the mysterious triumphs of humanity as seen through Zimmerman’s steely gaze. As with all of Zimmerman’s work, the precision of his draftsmanship matches the meticulous way in which he pairs images. In this quiet self-portrait, Zimmerman reflects on mythologies and open spaces, on how we find poetry in the desert (the deserts we drive through and the metaphorical ones, too). Here, the Willie Nelson album Stardust pairs with drawings of two book covers, Rocks and Minerals and The Pith of Astronomy; Keith Richards rocks out in a drawing made from a 70s-era photo alongside a motorcyclist racing round a curve. There is a resigned embrace of apocalypse here, matched with an insistent reminder that there is beauty at the boundaries of the possible.

Meehan’s exhibition is accompanied by a zine and a sound piece made in collaboration with David Coccagna and available in a limited edition, with proceeds benefiting Planned Parenthood. Titled A Pocket Full of Stones, the zine takes excerpts from Virginia Woolf’s The Waves, finding the places in which Woolf mentions birds or stones. Pairing these excerpts with photo collages of women in protest and heroines, the text becomes a kind of rhythmic landscape poem and simultaneous call-to-arms. The sound piece has two parts: played in the gallery, Starling: Murmur & Synthesis consists of bird sounds that rise and fall in intensity, a recurring wave of threatening cackles and contented warbling. The second part, Pocket Full of Stones – From the Waves by Virginia Woolf is a sonic rendering of Meehan’s reconfigured Woolf.

Meehan and Zimmerman are both adept weavers, running threads of references into their brilliant webs. Each looks to specific histories and their images to point to the disastrous present. ‘Here,’ they seem to say, ‘is a small stone to throw against this wall of hopelessness. Look at this thing that still, somehow, provokes wonder.’ Indeed, Meehan leans toward hope in struggle, even in her exhibition’s title, which nods to an Emily Dickinson poem of the same name.

Just behind Murmur, a very small vintage photograph is pinned to the night-blue wall. It’s a wintry landscape, with barren trees protruding through deep snow. Stumps are covered in a whiteness that is all-encompassing, heavy, impenetrable. In the foreground, a birdcage hangs from a roof covered in icicles. We see the shadow of a bird framed inside its cage. It might not fly today, but in the face of such cold, we might imagine it thrashing its wings mightily against the metal bars wrapping around it.