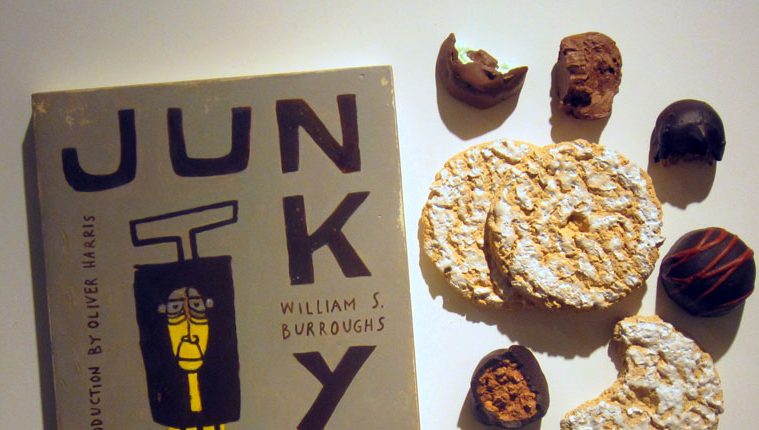 Houston artist Marzia Faggin made a splash in 2011 with her Nau-haus Art solo show of life-size painted cast-plaster still lifes of potentially addictive pills like Lithium, Xanax and Adderall, which she juxtaposed with equally convincing replicas of equally addictive chocolates, cookies and other sugary snacks.

Dissatisfaction, her follow-up at d.m. allison art, Nau-haus owner Dan Mitchell Allison’s newish Colquitt Street space, keeps the same intimate, life-size scale but ups the ante both conceptually and formally. Candies, some half-eaten; pills; and snuffed-out cigarettes now sit along expertly cast and hand-painted copies of books from Faggin’s personal library. And what a library it is: Junky by William S. Burroughs, Albert Camus’s The Stranger and Charles Bukowski’s Ham on Rye are among the volumes sharing real estate on what Faggin calls “details of a nightstand” with scattered chocolates, capsules, and other bits of evidence of how the nightstand owner numbs or deflects his or her pain.

In that sense, Faggin is mining similar territory, although she told me at the opening – aptly timed for mid-February, the most maudlin week of the year, with its Valentine’s Day hoopla and humbug – that she was unfamiliar with Wolfe’s work and that, while the books she casts are hers, she does not intend any particular meaning to be inferred from her individual selections. (She may not intend it, but many visitors in the opening-night crowd talked of the personal associations individual books in Faggin’s collection conjured up.)

But by using the books in conjunction with her candies, pills, cigarettes and other addictive comforts, Faggin gives them a different resonance. Anyone who’s suffered from depression, melancholy or a simple, low-grade case of the blues should be able to relate to them in the way that, as Elton John reminds us, Sad Songs Say So Much. The pairings also raise questions about the futility and necessity of literature and art – are they, too, merely addictions, and if so, can addictions, too, offer paths to truths we might not otherwise reach? – even as they console us with the pleasures of looking at little things made with great love and care.