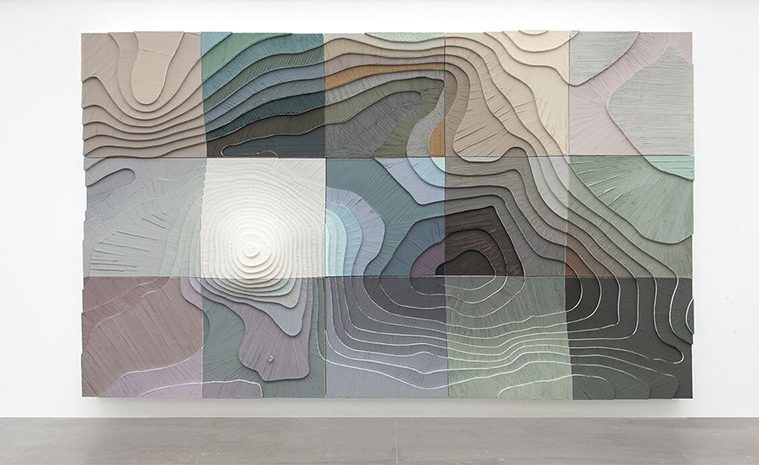 Li Songsong, Beihai, 2016, Acrylic on board, Courtesy of the Artist and Pace Gallery.

Cartography is a fascinating practice. Maps, whether based in reality or fiction, have shaped our existence and growth as humans. We crave the exploration that led to their creation. We have delved into the nooks and crannies of the planet to whatever extent our technology has allowed for our survival. We have constructed imaginary barriers as we define our nations – false barriers that have led to an indescribable level of bloodshed and subjugation. The borders delineated by governments through wars and treaties have created an Us and a Them time and time again. Groupings that are constantly used to build community and monger fear. 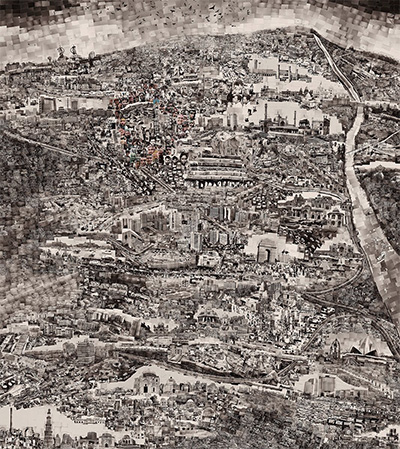 This is what we have chosen to do with cartography, turn a simple notion of exploration and documentation into the basis for separating families and barring outsiders from becoming part of our Us. On view at Asia Society Texas through March 17, 2019, New Cartographies presents the work of four artists who have engaged the practice of mapmaking as well as the sublime and the woes that come with it.

On the back wall of the gallery, hung alone in the space across from a bench, Li Songsong’s Beihai is a map brought to life. The artist reconstructs the spatial imaginary of an area, using the paint to reference the history of different points represented. Where a standard map would be limited in what it might communicate, Songsong’s serene coloration shares the tumultuous history of the area, lest we forget what borders and boundaries do to the peoples within and without.

Works by Sohei Nishino hang in the first gallery space, representing perhaps the most pure aspects of mapmaking. Rooted almost entirely in exploration and personal experience his Diorama Map series features collages of photographs he takes on his walks throughout the city. Camera in hand, Nishino documents his experiences and pieces these dioramas together from memory. They are not accurate representations of the places but reproductions of life lived. Tokyo through Nishino’s process becomes a city layered on top of itself, twisting, turning, and writhing out of his memory and onto the paper. 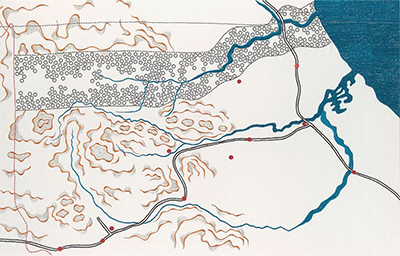 Artists Tiffany Chung and Allan deSouza both deal with the worst of what borders have thrown at our many societies. deSouza’s series, collectively titled Through the Black Country, parodies the old stories of exploration and inverts them as he shares the tales and recounting of one Hafeed Sidi Mubarak – a fictional descendent of Sidi Mubarak Bombay, an African guide who participated in numerous 19th century British explorations into East Africa. This 21st century Mubarak scours England in search of the source of the Thames. He writes, “Strong, tattooed lads come in with great cases of stone-washed denim, striped and flannel fabrics, neckties and baseball caps…” Tied to these narratives are gorgeous prints, some framed, others draped off of hooks. Mzungu I and II seem both human and architecture, perhaps a mixture of the spaces encountered along Mubarak’s way through the city of London. 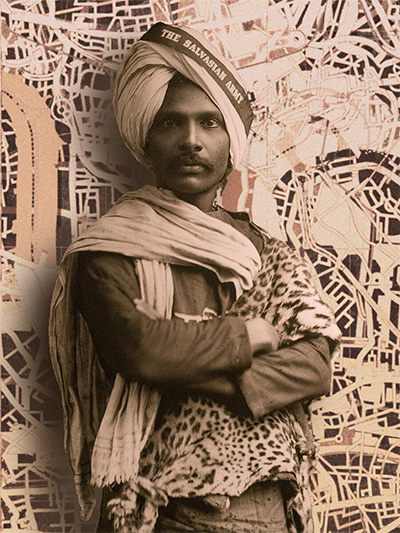 Chung’s space offers perhaps the most beautiful and devastating works in the exhibition. In scratching the walls of memory,  a small desk sits facing a corner of the room. Strewn across the walls its pointed towards are a mix of small bags and chalkboards. Written on the boards and sewn into the bags are stories of immigrants, refugees, whose lives have been shaped by tragedy. One set of bags is a participants’ recollections of his mother’s stories of waiting for a lover who will never return. Others share harrowing experiences of just barely escaping a country being bombarded and assaulted.

Her embroidery lends a strange beauty to these tragic places in her cartographic works. DMZ – 17th Parallel is map of the border (demilitarized zone) between North and South Korea. The terrain between these countries has been made so treacherous that few have managed to escape south. The DMZ is a quiet, tense place – an imaginary line made real through war and treaty.

Cartography is truly a fascinating and lovely practice. Even in fiction, though, it often results in tragedy.