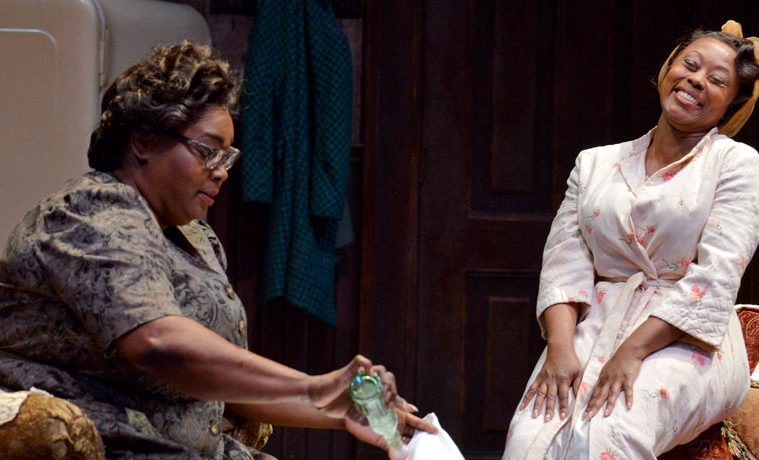 Review: Raisin in the Sun

IMAGE ABOVE: Liz Mikel and Ptosha Storey in Dallas Theater Center’s Raisin in the Sun. Photo by Karen Almond.

Raisin in the Sun may have been written during the turbulent social changes taking place in the ’50s, but its unflinching truthfulness is as timely today as when it became the first play written by an African-American woman to be produced on Broadway in 1959. 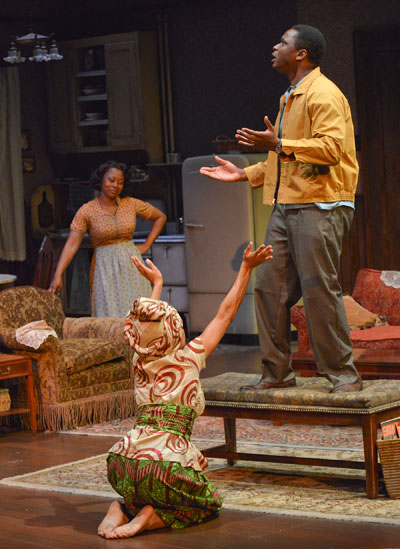 Ahead of a new revival on Broadway next year (with Denzel Washington), Dallas Theater Center opened its new season with a dignified and graceful production of this American classic. It will play in repertory with Clybourne Park, the 2010 Tony Award-winning play that bookends the story told in Raisin.

Playwright Lorraine Hansberry died at 34 of cancer — a crushing loss for American literature. Aside from a second minor drama, she left behind only this play, which captures the hurtful and universal complexities of family life. It’s a kitchen-sink domestic drama about a family that is fresh out of hope. What makes the play so good is its absolute sureness of craft, coupled with the playwright’s acute ear for the way that the members of close-knit families talk to one another.

The story of this play is both epic and simple. Mama is the head of the Younger family, after the death of her husband, Big Walter. She would prefer that a man ran the family, and  she is constantly waiting for her son to step up and take that role. Her dreams are for her family, and she plans to invest the insurance money in her family. Mama is used to suffering and hardship; she comes from a history of slaves and sharecroppers; she has  experienced lynchings, lost a baby and watched her husband kill himself with work. She is also far from perfect: She has made mistakes raising her children. And yet, there is a sense of peace, a strong faith, a sense of strength in Mama. She is the power in the family. But her kids and grandchild have a different worldview, and their expectations from life are different. Everyone’s version of The American Dream is varied, just as it continues to be in today’s society. 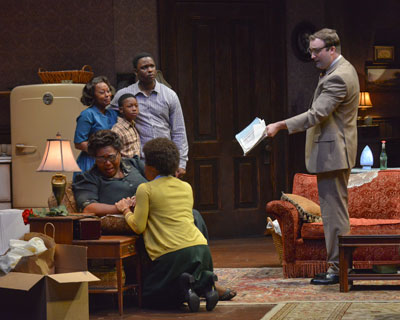 At the time Raisin in the Sun bowed on Broadway (it later spawned a film starring Sidney Poitier and Ruby Dee and a musical, Raisin) the nation was experiencing a seismic cultural shift. The Supreme Court had ruled that segregation in public schools was unconstitutional; the actions of Rosa Parks had spawned a bus boycott by the African-American population; and the materialism of  Hollywood and pop culture became more influential. Generational differences became more apparent, and the influence of extended families began to diminish. One could argue that today’s world is no less revolving, and revisiting Raisin in the Sun in the context of America’s first African-American president and his ideals of The American Dream have given the play added urgency.

Director Tre Garrett has wisely chosen a straightforward approach: No messing with tone or rhythm to give it a modern edge. The script is a winner, and all it takes are committed actors to live the parts in the realistic way as originally written. Each character is representation of something generational, a gender or race issue, and it’s a testament to Hansberry’s writing that the characters don’t come across as mouthpieces for the story. They are living, breathing human beings on paper, and as presented on the Wyly Theatre stage 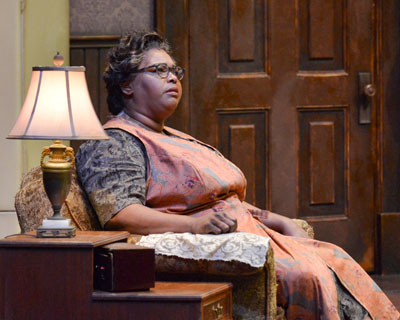 Local favorite for her musical and comedy roles, Liz Mikel plays Mama with absolute moral authority, while still gleaning some of the comedic undertones of the script. Mikel is too accomplished an actress to let the laughs smoother the big questions the story asks. You will laugh plenty in this production, but ultimately it earns its poignancy toward the end. Tiffany Hobbs gives a canny performance as Mama’s daughter who selfishly expects the world to fall to her feet, and Bowman Wright, as the son, portrays a dreamer who’s looking for the quick way to move up the economic ladder, honestly or not.

Raisin in the Sun pulls no punches — surely one reason it’s been so popular with audiences. The title of the play references a conjecture that Langston Hughes famously posed in a poem he wrote about dreams that were forgotten or put off: He wonders whether those dreams shrivel up “like a raisin in the sun.” Indeed, the dream still lives in this Dallas Theater Center production.