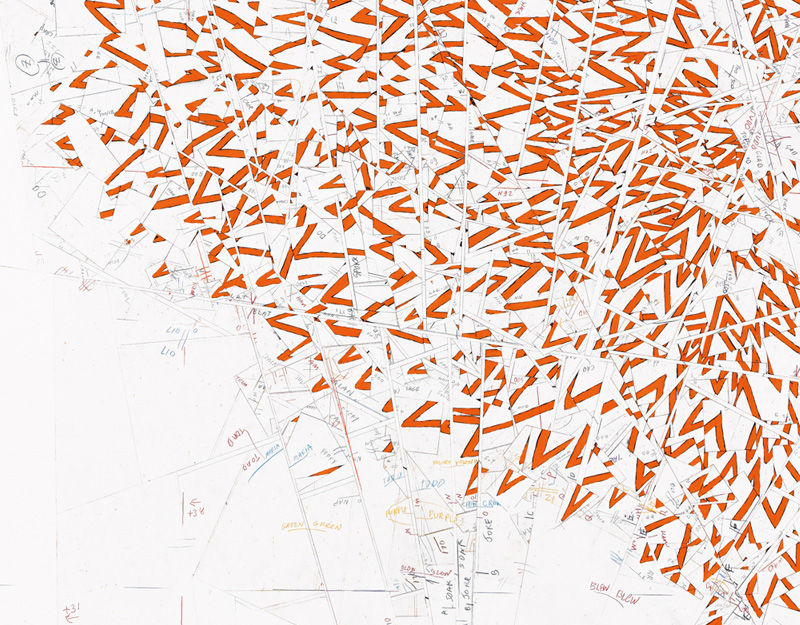 ‘REVIEW: Roni Horn, When I Breathe I Draw Part I’ at Menil Drawing Institute

There is something about the gauzy lighting at the Menil Drawing Institute that makes me mistrust my eye. A scrim seems to hang in the air, making the walk toward Roni Horn’s drawings especially dreamy, at once hazy and hushed. This magical approach creates the effect of an unfolding: each drawing emerges gradually, in all its inexplicable and rich detail, as you move toward it.

For the first of the MDI’s two consecutive shows dedicated to Horn’s drawings, When I Breathe I Draw Part I (on view through May 5), 10 drawings made with pigment, varnish, colored pencil, graphite pencil, and collage fill the main exhibition space.

From a distance, they look a bit like maps, their pigment-drawn lines moving in jerks and twists to build forms that are at once complex and deceptively simple. Each drawing seems monochromatic from a distance, though its color becomes more unstable as you draw near. Nothing is quite as it seems.

Horn has chosen three primary colors here—red, blue, and a golden yellow—that sometimes pool together, and other times become spindly paths, meandering across the paper’s surface. We might imagine the process of making them like an unplanned walk through a landscape, cohering into an intuitive path only as a response to the variations of the day and the place.

At a closer look, one realizes that each drawing is a registration of an experiential and organic process of its making. Cut edges of paper sit alongside one another, graphite marks and words connecting and fragmenting across the surface. There are repetitions and doublings, and we see Horn’s playful relationship to words, her brilliant engagement with language at the level of the material. These are obviously not words that explain or tell. Instead, they meet and mingle and obfuscate and burble and laugh and mimic one another, creating a sensation of noise (with its many moods) on paper.

“Like identity—fluid, withholding, present, and as constant as breath—the works cannot be pinned down,” writes curator Michelle White. Indeed, these drawings are not to be defined. And as much as we want to believe that seeing something is the same as understanding it, Horn (wisely) won’t allow it.

Throughout her career, Horn has considered the openness of exchange, the space between things, the untranslatable, what it means to travel. These are concerns that mark not only a body of work, but a way of being in the world. In several earlier series, she has created pairs or doubles of the (seemingly) same object or image. If two identical things are placed a few feet apart, we might stand between them trying to prove their difference or sameness. But difference and sameness are not the most significant questions in this exercise. Rather, the question is about the connector between the two things. That is to say, the question becomes how to build a bridge, how to generously inhabit the space between. 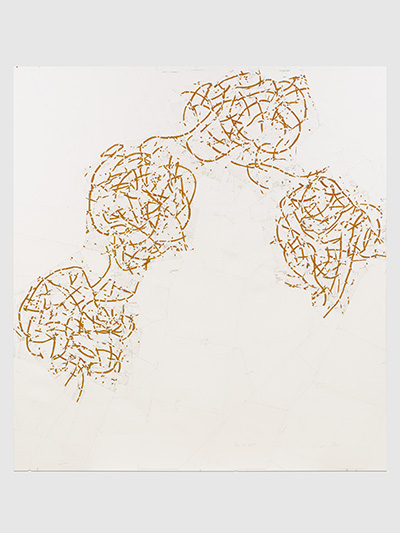 There is a similar thing happening in these evocative drawings. Standing at a distance, we see their larger form, their lines and color, the wide expanse of paper. Upon the approach, though, we find other drawings made of previously imperceptible details. Come close. These drawings breathe, they invite, they are indescribable. The only thing absolutely true about them happens during that walk you make to get closer, always closer. Trust your eyes: nothing is steady, easy, or clear. And, that is infinitely beautiful.