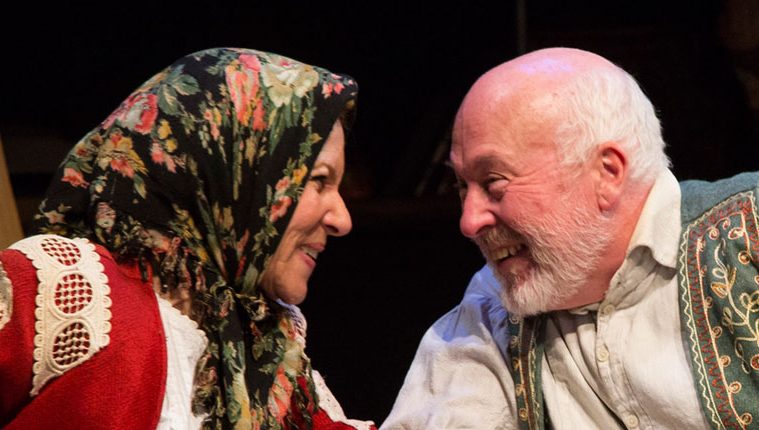 And right there brings us to the crux of the problem in this endearing drama: what does it mean to be understood? And, following that, what is the language of love? There are multiple layers to this engaging story about language and loss, which unfolds almost languidly across its two acts, semantics and sentiment lapping – sometimes crashing – against each other along the way.

It’s the story of George, a linguist (played with captivating intensity by Rick Silverman), who finds out that his wife, Mary (the excellent and nuanced Shelley Calene-Black), is leaving him, in part because he cannot express how he feels about her.

But it’s also the story of Alta (Luisa Amaral-Smith, acting with gorgeous bursts of emotion and wisdom) and Resten (the ever-amazing James Belcher, whose chemistry here with Amaral-Smith is charmingly believable), an elderly couple who speak a language destined for death, that George wants to capture on tape to preserve their culture.

Alas, the pair has no interest in speaking their native tongue; they’ve become so ornery together they’ve decided to spend the rest of their time fighting –in English, what they call “the language of anger.” And it’s the story of Emma, George’s assistant (Beth Lazarou, who breathes pathos and hope into her character’s hesitance and unrequited love). And, of course, it’s how all their stories intertwine, pulling the audience along and stirring questions along the way.

The Language Archive isn’t so much a story tied up with a neat bow and tidy ending as it is a starting point for the questions we wonder about life: how does our language breathe life into our culture? How do we create spaces and intimacy with each other? What doe we share across relationships? How do we express love?

Across the evening, we’re treated to both tragedy and triumph as the characters learn to find – and express – themselves, and along the way discover who they are and where they belong in the world. The Language Archive is about the messy business of being, and there are happy flashes of humor and joy amid its pain and poignancy.

Ryan McGettigan’s set is a wonderful, open archive room, filled with shelves of boxes and ephemera, dominated by a massive wooden wall of files. Coupled with Kirk Markley’s lights, which cast a golden glow over it all, it’s both comforting and the perfect place to watch this human drama unfurl. Tim Thomson’s sound combines snatches of foreign language with the thumping reminiscent of a heart beat, both being metaphorically and literally the rhythms which drive the action.

Directed with Sally Edmundson’s caring, capable hand, The Language Archive proved to be a compassionate look at the deeper sides to all of us, calling us to the wonder of self-expression, and the siren song of a life well-loved.