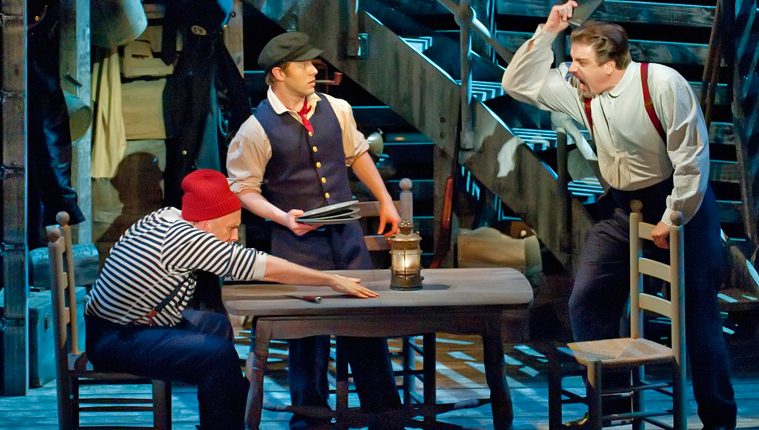 “Opera” is one of those terms, like “classical music,” that poorly serves to describe an entire world of artistic endeavor. Writers strive in vain to define the difference between opera and Broadway shows when opera companies produce Sondheim’s “Sweeney Todd” and Broadway mounts a production of Puccini’s “La Boheme.”

The Dallas Opera and the Dallas Theater Center joined hands in a very different way when “The Lighthouse” opened at the AT&T Performing Arts Center’s Dee and Charles Wyly Theatre for a one weekend-only run in March. Rather than taking a Broadway-ish opera-leaning show to the opera house, they took an unmistakable hardcore, intermissionless chamber opera, written in a dissonant 20th century language, to the theater. The results are a stunning and memorable production that transcends any of the labels that can be stuck on such a theatrical experience.

Musically, Peter Maxwell Davies writes in an unabashedly modernist musical language that was all the rage in 1979, but sounds slightly dated today. He tosses in some American folk elements, such as in the three solo arias for the characters. One uses banjo-pickin’ bluegrass, another is like the sentimental ballades popular at the turn of the 19th century, while the last is based on Protestant foursquare Salvation Army-style brass band and tambourine hymnology. In this, Davies stands in a distinguished line of American composers who include the indigent music of their social milieu in their compositions. Yet, such music has found a welcome home in horror and suspense movies, if not in the concert hall. Thus, it doesn’t sound much out of place to the ears of modern audiences in the spooky story of “The Lighthouse,” while it might have alienated in a mushy love story.

Based on a true story, the three protagonists of “The Lighthouse” have been locked up in the small isolated space for months and their relief crew is long overdue. The opera starts with an official inquiry into the disappearance of the three caretakers, with the same three singers playing the investigators, and ends with a gruesome, but possible, explanation as to what actually happened. Nothing is “right” from the very opening and Davies’ abstract musical voice creates a surreal world throughout, right up to the compulsively repeated pattern that brings the opera to its shattering close.

Robert Orth in “The Lighthouse”

The three singers are fine singing actors who would not be out of place in either a Winspear Opera House mainstage opera production or a Wyly Theatre play. Robert Orth, who last appeared in the Dallas Opera production of “Moby-Dick,” is one of the finest singer/actors working in opera today. His portrayal of the morally bankrupt petty thief is a study in slime. Tenor Andrew Bidlack gave his young character an invented innocence that is all the more pathetic when we find out that a vaguely implied childhood sexual indiscretion led to life-changing shame. Daniel Sumegi, an impressive bass, thunders his damming and constricted religiosity until it literally drives the other two crazy.

Kevin Moriarty, artistic director of the Dallas Theater Center, shines in his first outing as an opera director. His concept is realistic, yet there is something bizarre in the air from the first moments. He gets naturalistic performances from his three accomplished actors that become increasingly bizarre on such a gentle incline that you hardly realize how strange everything has become when the final horror is revealed.