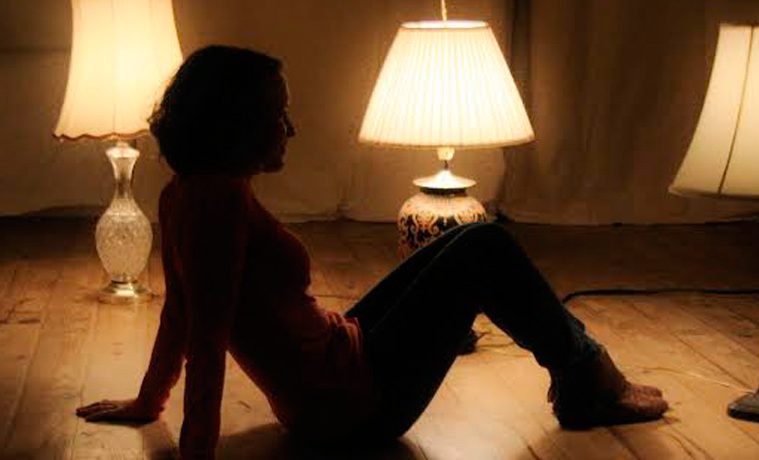 Review: We Were Nothing

IMAGE ABOVE: Kayla Newman in Poison Apple Initiative’s production of We Were Nothing. Photo by Jackie Buerger. 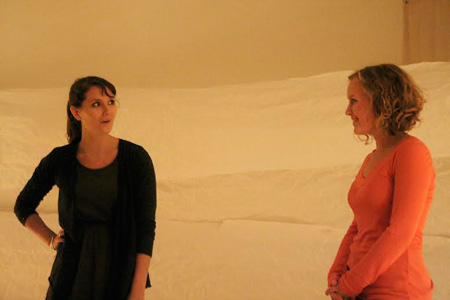 Terah Zolman and Kayla Newman in Poison Apple Initiative’s production of We Were Nothing. Photo by Jackie Buerger.

If you walk into the backyard of a poorly lit house and see Bastion Carboni, the director of Poison Apple Initiative, pacing around looking stressed and smoking, then you’re in the right place, Monstrosity Studios.

A staircase leads up to the performance space, which is a swanky living room with all of the furniture compiled on one side. Carboni designed the exquisitely minimal stage. Framing the stage are two rows of warm, glowing lamps that lead to a wall of crumpled paper that was clearly hiding something. Spatially, everything glowed with the warm invitation of a hot toddy. In the center of it all is We Were Nothing, a new play by Will Arbery, created in collaboration with Lisa Szolovits, Shelley Fort, Elly Smokler and Emilie Soffe, that dissects the maintenance of interpersonal relationships in an age of over communication.

The play is a composite of Kelly and Shelley’s (played by Kayla Newman and Terah Zolman) correspondence as they drift from hometown “besties” to acquaintances by obligation. Kelly and Shelley are those girls that you probably knew in college that interrupted your sacred, hang-over recovery fireside nap with long, chirping phone calls about nothing in particular. Arbery captures the rhythm of natural conversation in that much of our mid-conversation statements don’t communicate a discrete message. Of course, through the prolonged exchange of these primal utterances, a message is conveyed. However, Arbery and Carboni go to great and well executed lengths to illustrate the meaning conveyed by how a message is delivered as opposed to what it contains.

As the play progresses, the how-determined meaning is tested by shifting Kelly and Shelley’s correspondence through various means of communication. Most notable is the Facebook sequence, during which the same few phrases, like, post and comment, are used over and over again in such succession that they are semantically stripped. Once the phrases are empty, the void is filled by pure tone and quite a lot is said without having to say anything at all.

There were moments that felt almost too relatable. Struggling to resolve post-graduation existential angst through ex-lovers and Gotye lyrics strikes too close to home. Not that this is a bad thing, but it does generationally bind the play to an extent.

In one moment, Kelly is discussing ASLAP, the John Cage organ piece that began in 2001 and will not end until 2640, and how the piece will go on for 639 years as long as the medium is there to sustain in. Quite clearly, Arbery is asking how long interpersonal relationships, disconnected from our daily lives, will last as long as the infrastructure sustaining them persists. Later, she reflects on the telegram and how the word “stop” was included in every message. Today’s forms of communication lack any semblance of finality and so correspondence continues long past the point at which anything meaningful is really exchanged.

Yet, even the most twitter savvy millenials must reckon with face to face interaction at some point. Carboni beautifully captured the physical discomfort of two people stuck on a couch with nothing to say to one another. The exchanging of videos as a means to fill empty space, the rearrangement of pillows to have something to do with your hands, and the rehashing of old conversations for the sake of having something to talk about was all too real.

It’s possible that the play would be incomprehensible and frustrating to watch for those who aren’t plugged in to tweet streams and snap chats, but if they can stick it out until the e-mail scene they might find it enjoyable. On the other hand, there might be more artistic distance between the non-millenial viewer’s experience and action onstage such that the play is driven more by its commentary on communication than its hyper-relatability.

We Were Nothing
Poison Apple Initiative
Dec. 11-21